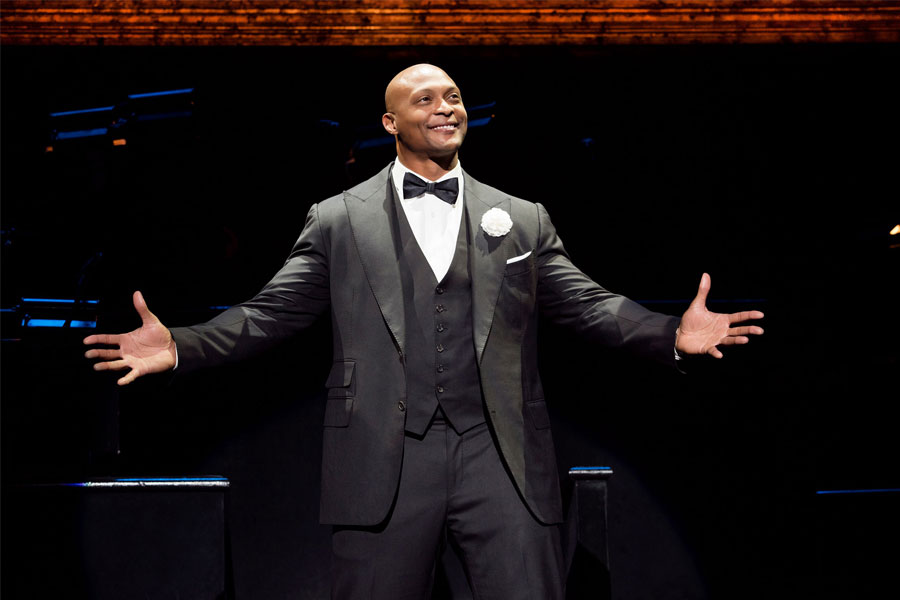 Eddie George in “Chicago.” George has had many careers, including college and pro football player, entrepreneur and actor. (Source: Jeremy Daniel)

Eddie George in “Chicago.” George has had many careers, including college and pro football player, entrepreneur and actor.

It’s not every day a former NFL player graces the musical theater scene, but this is the life of Eddie George (Kellogg ’09). From starting as a running back for the Tennessee Titans to filling the role of Billy Flynn in “Chicago,” George has made a name for himself as a renaissance man.

George has had many careers — college and pro football player, entrepreneur and, most recently, actor in the national Broadway tour of the hit musical “Chicago.” Nearing the end of its eight-week run, the show will be featured in Chicago’s Cadillac Palace Theatre from May 7-12 and will then continue to the rest of the country.

Before beginning his acting career, George attended Northwestern’s Kellogg School of Management, saying he did so because he wanted to be able to better understand the business aspects of his career ventures. George is putting these skills to use. Along with acting, George owns a restaurant called Eddie George’s Grille 27 in Columbus, Ohio, as well a landscape architect and development firm. He also owns and runs the Edward George Wealth Management Group, a firm that helps athletes to manage their money. Additionally, he is a yoga instructor with a workout DVD called “Eddie George Yoga For Strength,” which is available on iTunes.

George started his career at Ohio State University where he studied landscape architecture and played on the football team. After fumbling a few times his freshman year, George didn’t get much playing time until senior year, when he began gaining notoriety and eventually won the 1995 Heisman Trophy, an award given to the most outstanding college football player.

George said he hadn’t gained attention from professional scouts until the Buckeyes battled Notre Dame in the fourth game of his extraordinary 1995 season.

“We hadn’t played them in almost 40 years at that point,” George said. “To pull off a victory in grand fashion had to be one of my better days running the football and that really put me on the radar for winning the Heisman of the year.”

In 1996, he was drafted in the first round by the Houston Oilers, which moved to Tennessee in 1997. He played with the franchise for nine seasons, becoming a four-time Pro Bowler, joining the 10,000 yard rushing club and earning election to the Philadelphia Sports Hall of Fame, which is where he grew up.

During this time, George started to dabble in acting but decided to take his passion seriously once he finished playing football. To do so, he sought an acting coach and has since appeared in “NCIS: LA”, “Run the Race” and “Ballers.”

“I wasn’t good, so I thought if I wanted to get into acting I really needed to take it serious and learn the fundamentals,” he said.

George said his coach, Anna Maria Franzella, introduced him to the world of musical theater. One of the first songs George and his coach worked on together was “All I Care About” from “Chicago,” bringing his coach to suggest he play the role of Billy Flynn.

At the time, George only wanted to focus on acting, and was worried he didn’t have the skills to take on a such a big role.

“I’m like, ‘Anna, please. I’m just trying to use this as a way to get my voice ready for speaking,’” he said. “She said, ‘No. You have a really good singing voice. Watch, I’m going to turn you into a singer.’”

Now, George performs that song for an audience eight times a week for Broadway’s “Chicago.” As Flynn, George plays a hot-shot lawyer who’s never lost a case and represents the show’s murderesses.

This is the biggest role George has had thus far, and he said it was a challenge to adapt to the show’s vigorous singing and dancing. But despite the differences in his careers, George said his background in football has helped him keep up in rehearsals and prepare for the role.

“I would definitely say my time playing ball has helped prepare me for the rigorous schedule and the demanding stress that it puts on your body,” George said. “It’s very comparable because you’re going 12 hour days in rehearsal … it can be very taxing — mentally, emotionally and physically.”

In his eight-week stint playing the conniving lawyer, he said he has worked hard to keep his performance fresh everytime he goes on stage. When he first began performing, he focused a lot on simply remembering lines and timing, but now that he’s more comfortable, George finds ways to make every performance different. He said he wants to make sure that if someone saw the show on a Friday night, they wouldn’t see the same show Sunday afternoon.

“I’m always searching,” George said. “That’s the challenge of it because doing it so many times — you can’t fall asleep on it or take anything for granted.”

Castmate Dylis Croman, who plays one of the women Flynn represents, agreed with the sentiment, saying George does a good job of keeping thing fresh every night. Lana Gordon, another castmate said this is her favorite part about working with George.

Gordon, who plays another one of the murderesses, said she finds George’s charismatic energy engaging in scenes. She said when they’re on stage, they play around with each other instead of getting wrapped up in doing their lines a certain way every time.

“The great thing about working with Eddie George is I give him something and he gives me something,” Gordon said “We have this beautiful back and forth banter with our scenes which makes it come alive each time we do it.”

Although playing Flynn is difficult, George said he loves the role because it pushes him to work harder — something he aspires to achieve in all of his different career paths. And although they may seem random, George said he pursues ventures that are a part of his “three Es” — entertainment, entrepreneurship and education — values he feels passionate about.

“It’s understanding that it’s not just picking things you like to do, it all has a rhyme and a reason,” he said. “It’s all geared toward helping others. It can appear to be scattered, but everything falls under one of those three E’s.”