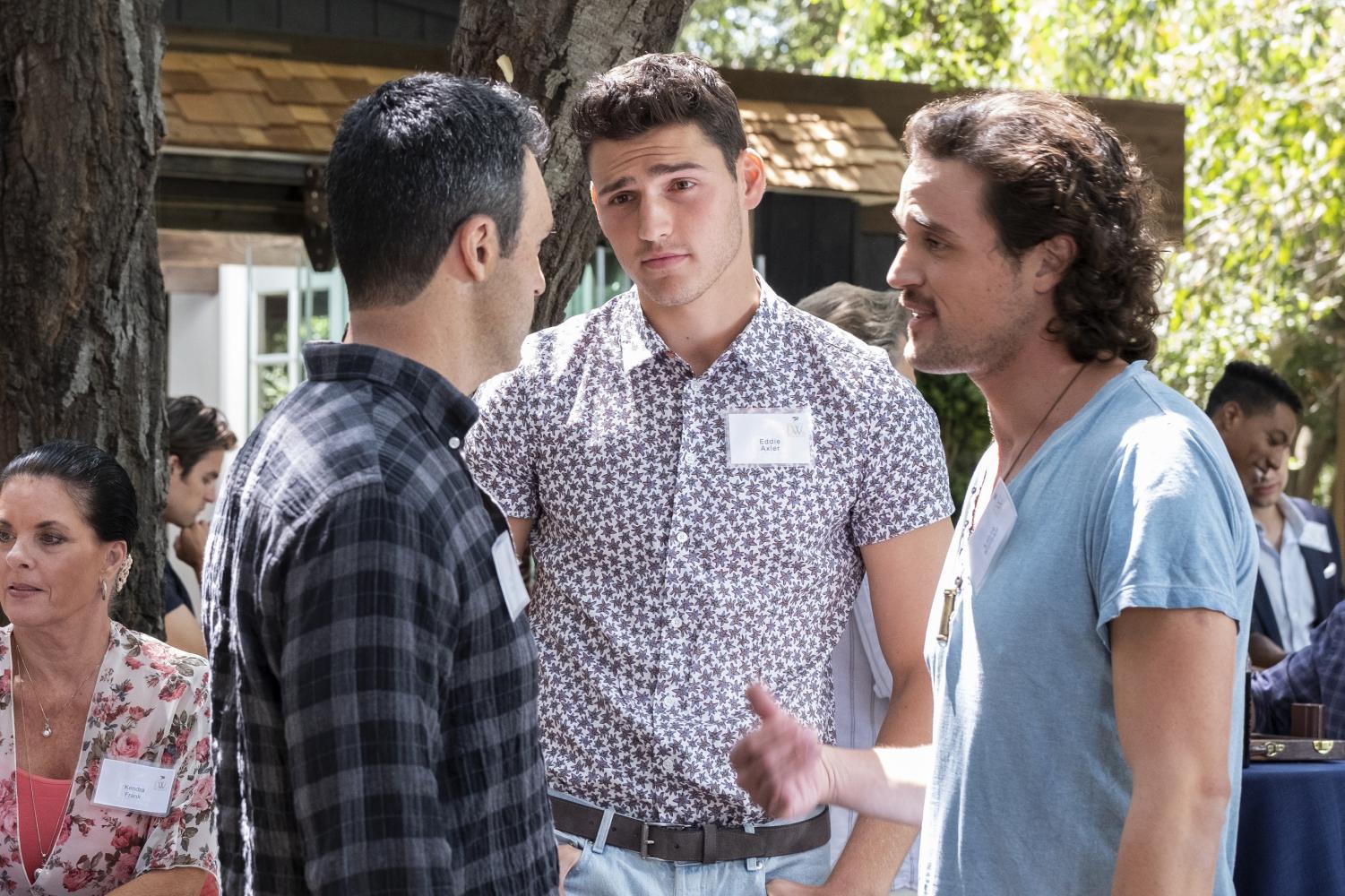 Charlie Hall on the set of “Veep.” (Source: Colleen Hayes/HBO)

Charlie Hall on the set of “Veep.”

Famed actress and former Northwestern student Julia Louis-Dreyfus has a nickname for her son Charlie Hall: “Cha.” And although Hall (Communication ’19) has been called this by his mom for years, he said it was strange to hear it coming from Louis-Dreyfus while she was giving him stage directions on a recent episode of “Veep.”

The forward on the Northwestern men’s basketball team took on a very different role this summer when he guest starred on an episode of his mother’s political satire show, “Veep.” The episode, which premiered April 7, features Hall as an over-exuberant fan of an influential political donor, Felix Wade, who is hosting an Aspen retreat that includes presidential candidates Selina Meyer (Louis-Dreyfus) and one of her opponents.

Wade, played by William Fichtner, has a fan club of “much younger” guys in the episode — including Hall’s character — who follow him around the retreat. Although he only speaks twice during the episode, Hall said Louis-Dreyfus insults him after he leaves the scene, an experience he said he was excited to see on camera.

“Veep” executive producer David Mandel said the show was looking to find someone to fill the part when Louis-Dreyfus heard about the role and volunteered Hall. Mandel agreed with the choice.

“I don’t know if he’s so much about the acting or if he just really wanted to wear the tightest shirts he’s ever worn,” Mandel said. “He did a great job. This is gonna sound ridiculous, but I guess if I were a wealthy, crazy billionaire who wanted to surround myself with younger boys, I think Charlie would be an excellent pick.”

Hall said being part of the “Veep” cast was different than acting on other shows because many of the staff writers stayed on set, reworking the script down to the last minute — an atypical practice, according to Hall. He said his lines changed many times, but it was “relatively simple” to act them out once they were finalized.

“It’s really cool because they’re watching every take, and any time they think of any sort of ad lib or line change, they tell it to you,” Hall said. “I had a bunch of different alts that I ended up doing, so that way, you end up interacting with the writers more than you do most other shows.”

Mandel said this is typical of “Veep,” as he said writers try to constantly improve scenes by trying out alternative jokes and improvisations. Hall took it all in stride, he said, calling his timing “perfect.”

Although he had been on set many times throughout the show’s seven-year run, Hall said it was interesting to meet crew members he never got to interact with before, like sound technicians and makeup artists.

But the person who knew him best on set was excited to see him on set in a new role.

“Julia is obviously a multi-multi-award-winning actress and she is executive producer of the show and all those things,” Mandel said, “but when her son was on camera, she was just glued to the monitor taking pictures with her iPhone like anybody else’s mom.”

Hall said he wants to go into the entertainment industry after graduation and work in the burgeoning realm of sports comedy — an area he called “lacking.” Hall said he would ideally like to work for a network and create his own interview-based sports comedy show.

This is not the first time Hall has done comedy. In high school, he posted comedy videos on YouTube, and works for Northwestern’s athletics department while on the basketball team, participating in sketches and interviews.

Associate Director of Communications for Northwestern Athletics Ray O’Connell said Hall’s personality is “as unique as it gets,” which he said is ideal for sports comedy. In the past, Hall has collaborated with the athletics department on sketches for the NESPYs — a student-athlete award show playing off ESPN’s ESPYS — and comedic interviews during Northwestern’s 2017 NCAA tournament run.

O’Connell said Hall has “no on- and off-switch” — he’s always trying crack a joke or creating a bit with teammates and staff members. This upbeat and entertaining personality, O’Connell said, is what he thinks will make Hall successful in the entertainment industry.

“He’s just that funny. He’s just that creative and he works hard,” O’Connell said. “I think he would be successful in that industry regardless of who his parents are.”