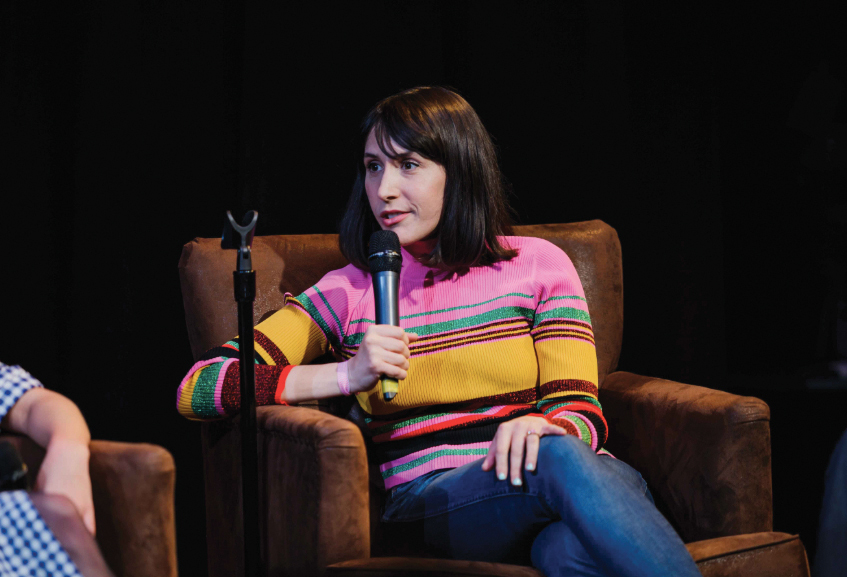 Comedian Jen Spyra (Communication M.F.A. ‘12) speaks at an event. Spyra is a writer for The Late Show with Stephen Colbert, and said she feels her power as a writer comes from having unique ideas in an industry dominated by men. (Source: Jen Spyra)

Comedian Jen Spyra (Communication M.F.A. ‘12) speaks at an event. Spyra is a writer for The Late Show with Stephen Colbert, and said she feels her power as a writer comes from having unique ideas in an industry dominated by men.

Jen Spyra (Communication M.F.A. ’12) is in a pitch meeting for the Late Show with Stephen Colbert. The talk show hasn’t aired yet, but Spyra already has an idea: a parody of Gwyneth Paltrow’s lifestyle brand “Goop.” Colbert names the fake brand “Covetton House,” and the sketch is born.

These kinds of sketches — takes on pop culture and current events — are Spyra’s comedic specialty. Since starting her career as one of only one of two women on staff at The Onion, Spyra said she feels her power as a writer comes from having unique ideas in an industry dominated by men.

“We naturally had different areas of expertise and different interests and passions than the guys on staff, it was really valued because we were essentially filling holes,” Spyra said. “So far I’ve only had this wonderful experience of feeling like my voice was necessary and that people really appreciated having a minority voice.”

Through working for publications like The New Yorker, The New York Times, McSweeney’s and, most notably, The Onion — where she served as a senior writer for almost three years — Spyra has used this voice to fill gaps in the industry. And after hearing that Colbert (Communication ‘86) would be taking over the Late Show, Spyra knew that’s where she wanted to be. She has now been a staff writer for four years.

However, Spyra’s comedic roots began in Chicago, where she was a member of the iO Chicago improv team after she finished her undergrad at Barnard College.

“That was my entrée into the world of comedy,” she said. “I have found that the basics of improv are invaluable to writing. You find a game and a scene and you just play it by escalating it and hyping it, and that’s exactly what you do in short form humor pieces.”

While she was performing, Spyra applied and got into Northwestern for graduate school and began studying to get her Master’s of Fine Arts in Writing for the Screen and Stage.

Zayd Dohrn, the chair of the department of Radio, Television, and Film, taught Spyra during her time at NU. He said her witty, sarcastic remarks always made an impact on the classes she was in.

After graduating and beginning her work at The Onion, Spyra would send Dohrn her articles after they were published. While the publication does not have bylines, Dohrn could tell which works were hers due to her unique voice as a writer.

“Her work is just absolutely funny and smart,” Dohrn said. “I never know what stuff is hers on Colbert, but I think I can tell because she’s got a voice. There are certain jokes that just sound like her.”

Some of Spyra’s favorite sketches for The Late Show include “Dialogue with a Demon: The Dick Nighttime Murders” — a parody of Netflix’s Ted Bundy documentary — and the “Wiggles” series — a Late Show segment in which Colbert sings “cute, vanilla” songs only to be interrupted by rap group Run the Jewels.

Dohrn said her talent goes beyond comedy into other genres, so it doesn’t surprise him that Spyra now consistently writes about politics.

Spyra said her work at The Onion helped her prepare to pitch ideas for the Late Show. While at the publication, Spyra said she learned how to find pitches by reading the news and how to make her voice heard — skills she uses frequently at the Late Show.

However, in her latest work, Spyra is focusing on comedy unrelated to current events. She is writing a still-untitled book of comedic short stories — her first published book — which will feature some of her unpublished material as well as a few short pieces she published in The New Yorker.

“I would sort of describe the comedy as a surreal dark comedy with a light touch,” she said. “That’s the sensibility that runs through the book. There’s no character to carry you through. It’s all different sorts of genres and eras. It’s a mish-mash.”

And although she enjoys writing long-form pieces, Spyra said she feels most at home on Twitter, where she has over 22 thousand followers. Just one look at her tweets, and it’s clear that she doesn’t hold back.

“It’s not like I *want* someone to deface my home with antisemitic graffiti. It’s just that I’ve always wanted to use a pressure washer,” she tweeted in March.

It’s not like I *want* someone to deface my home with antisemitic graffiti. It’s just that I’ve always wanted to use a pressure washer

Spyra said her Twitter account is a place for her work and her work only. It is her space to flex her comedic muscles, even with only 280 characters.

“You can experiment with your own voice, and you don’t really have to run it past anyone else,” she said. “No one has to say yes to you doing it.”

But every day at the Late Show, Spyra said she feels her voice is heard. Certain ideas or sketches, she said, are only thought of by women.

Most of all, Spyra says it’s cathartic to be able to poke fun at the day’s current events, whether it’s the Mueller report on Russia’s interference in the 2016 election or one of President Donald Trump’s varied speeches.

“At the end of the day, people enjoy having that day’s outrageous news digested for them,” she said. “People enjoy the sense of community that you get with the Late Show where we’re all outraged by something, and it’s fun to see it digested in a smart, funny way.”