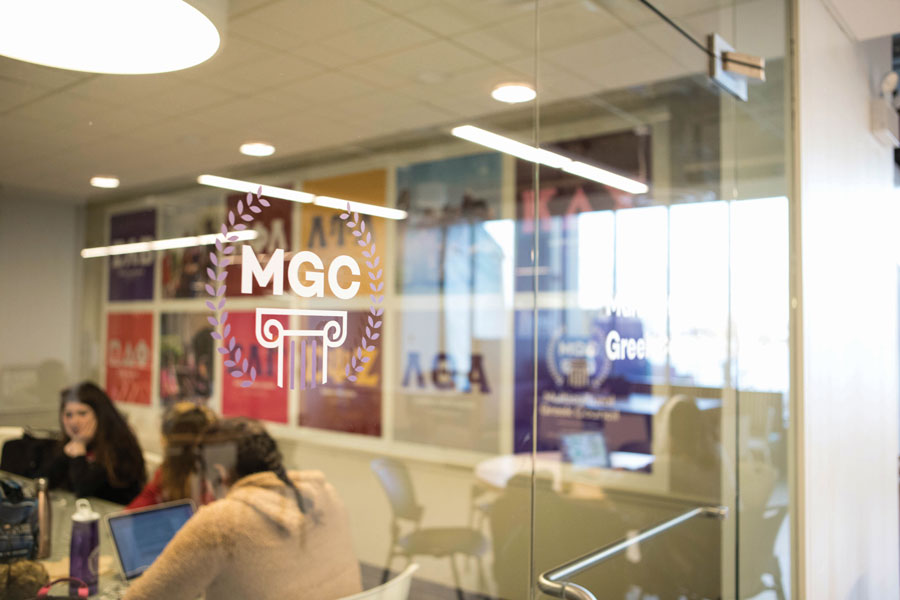 Yuri Villa wanted no part of Greek life. Unaffordable fees, social events, pressure to live in a common house — that’s what she imagined of “mainstream” sorority and fraternity culture.

Villa initially dealt with impostor syndrome, the feeling that the Northwestern experience wasn’t meant for her. As a Latina, she searched for a space to interact with people who would understand her cultural references, focus on uplifting the Latinx community and believe in the same issues with the same rigor (like, Villa said, protesting a U.S. Immigration and Customs Enforcement public relations officer visiting campus in May 2017).

She found that space late freshman year after joining the NU chapter of Lambda Theta Alpha, the nation’s first Latina sorority. At Northwestern, it’s one of six active Latinx, Asian and multicultural service-social organizations that make up the Multicultural Greek Council.

Since 2017, MGC has for the first time received a designated space in Norris University Center, a permanent adviser in the Office of Fraternity and Sorority Life and guaranteed University funding for members.

But members say MGC, alongside the historically African-American National Pan-Hellenic Council, lacks name recognition on campus. Especially this year, they said, MGC is facing a Catch-22: Because of lower-than-usual membership numbers, the council doesn’t have enough manpower to recruit as intensively as it wants to. That means membership numbers will likely remain low. And if it gets to the point where there aren’t enough people willing to fill the executive board, the University could disband the council, Villa said.

Villa, a Weinberg junior, currently serves as both the MGC president and vice president. She is one of multiple people who took on more than one role to keep everything operational — at least for this executive term.

“Multicultural organizations, you either run into them accidentally or find out about them much later. That’s why it’s important for us to exist at all, why I felt like I had to step up,” she said. “We’re trying hard to stay alive.”

Carving out a space

MGC is one of four Greek councils at Northwestern, accompanying NPHC and the better-known Interfraternity Council and Panhellenic Association. Unlike the latter councils, MGC and NPHC do not have on-campus housing.

“The visibility of having houses on campus makes everyone aware PHA and IFC exist,” said Weinberg senior Kinsey Erickson, a member of Asian-interest sorority Kappa Phi Lambda. “Besides, multicultural organizations are pretty new. In IFC, people have dads who have dads who have been in those chapters.”

Villa said the average dues for MGC organizations are intentionally set at about $300 for the whole year to avoid financially burdening members. In comparison, PHA chapters’ annual active member costs — excluding optional food and living charges — are $1,100 on average, according to PHA’s 2019 financial matrix for its 12 active chapters. IFC’s average for the 14 of its 16 active chapters listed on the latest financial guide is roughly $1,800.

“Not every MGC organization does rush, and those that do make it very private and personal to focus on building relationships,” said Lambda Theta Alpha president Rocio Bautista.

Members said the process can include attending a number of get-to-know-you events (some cultural in nature, like a “henna night” with Kappa Phi Lambda), interviewing with current members or doing activities that bond pledge classes.

“I am a first-generation student on campus. I didn’t know what college life was supposed to be like,” said Bautista, a SESP junior. “When I met the Lambda Theta Alpha members and saw how close they were to each other, I got the sense that it was home away from home and a space where I could work to grow myself.”

Omega Delta Phi president Javier Francisco Cuadra believes the ideal number of members per organization would be between 12 and 20. But right now, the average is six, with Cuadra’s organization — the only remaining active MGC fraternity — at four total members. IFC chapters have 78 members on average and PHA chapters have 109 members on average, according to council executives.

“You can’t just commit a lot of time with just four people,” the McCormick junior said. “Let’s say I wanted to study abroad. It’s basically an impossibility for me because then I’m betraying the organization by leaving — and when I come back, it’s in worse shape because there were just three people on campus.”

This year, Latino-interest fraternity Lambda Upsilon Lambda has no undergraduate members and Sigma Lambda Beta has one. Pi Alpha Phi, the Asian-interest fraternity, was suspended from campus in October for violating the University’s alcohol policy.

Having too small a membership has implications beyond individual organizations, Villa said. If MGC members can’t fill the executive board, then the University will no longer need to recognize the council. Over time, MGC’s fraternities and sororities would have to integrate into the other three councils, where students’ voices may be lost, she said.

“It’s not so much that the administration is pressuring us,” Villa said. “It’s more about us being constantly aware of what could happen. It’s a burden.”

For Omega Delta Phi member Gabe Rojas-Westall, MGC faces one central problem: a systemic lack of education about the council that passes down to incoming freshmen year after year.

It passes down, he said, when a tour guide leads prospective students past The Rock, painted with MGC’s letters, and stumbles over what they represent.

It passes down when a resident assistant informs students mid-Winter Quarter that rush is over — not realizing that, while IFC and PHA recruitment have ended, the MGC and NPHC processes have yet to begin.

It passes down when a peer adviser encourages freshmen to “Go Greek!” but only hands out insider knowledge on more popular fraternities and sororities.

Despite that, Rojas-Westall acknowledged, things have gotten better over the last two years.

The University is more active in including MGC and NPHC in Greek life emails to incoming freshmen, the McCormick senior said. This Fall Quarter, MGC organizations were featured on banners lining Sheridan Road for the first time. And, Rojas-Westall added, peer adviser training was updated to include more information on the cultural councils.

Besides, having a full-time staff adviser in the Office of Fraternity and Sorority Life, assistant director Keith Garcia, is unprecedented for MGC. Until 2017, a graduate assistant would work with the council on a rotational basis. MGC members said Garcia helped transform the funding structure and coordinate a University-recognized space on campus.

Garcia said MGC’s fight for such a space came at the right time. In April 2018, the University announced it would change its food provider to Compass Group North America, which would renovate Norris’ ground floor. Compass took on the costs of repurposing the Commuter Lounge into MGC’s branded, glass-door room, which now sits near Asiana Foodville.

With Garcia’s aid, the council can now access University money more equitably. Since MGC and NPHC confirm recruits at the end of Winter Quarter, a portion of the Student Activities Assistance Fund — which partly covers Greek life dues for members — is now earmarked for the two councils. In the past, Garcia said, the fund was exhausted by IFC and PHA, which have earlier rush dates.

“Just (MGC’s) existence on campus is a fight against inequity,” Garcia said. “The greatest ability for change comes from the students. They’re the best advocates for themselves.”

Rojas-Westall noted, though, that MGC members have to be careful when seeking additional support. Students, he said, are constantly reminding themselves: “What you do has impact on everyone else in the council, so don’t just go after the administration.”

Cuadra said members are trying to funnel their requests — including wanting more advertising and securing MGC housing for underclassmen to fulfill the two-year live-in requirement — through Garcia.

“I never want us to sound ungrateful,” Cuadra said, “but I want people to understand that we shouldn’t be looked down upon for asking for more.”

Weinberg senior Kelly Cox is half white, half Korean. She’s comfortable in multicultural communities, having grown up in New Mexico alongside many Latinx individuals and Native Americans. But joining Kappa Phi Lambda filled a need she didn’t know she had.

“I wanted to understand my Asian heritage,” she said. “Now I’m able to empathize and talk about the, you know, ‘Where are you really from?’ question. We also talk about white beauty, the Asian fetish. It’s just a great group to have to be able to get away from everything else.”

But Cox and other MGC members said they wish dialogue around race and multiculturalism could extend further — especially through partnerships with the better-funded, historically-white councils.

PHA and IFC are having these conversations as they’re seeing more interest from students of color, said PHA executive president Ruby Phillips, who is a person of color.

“People are really easy to write off that people of color are only in MGC and NPHC,” the Weinberg junior said. “I’ve faced the stigma myself of giving up my race and ethnicity by joining the organization that I did. Thinking of these fraternities and sororities as ‘white’ makes people of color in them feel invisible.”

Still, Phillips, a former Daily columnist, agreed that past cross-council discussions and event collaborations haven’t been successful in the past.

Villa, the MGC president and vice president, said the burden to drive collaborations with PHA and IFC has fallen on already stretched-thin MGC leaders.

She said the imbalance starts with a lack of commitment during Greek Week, a week of social events in Fall Quarter that introduces students to the four councils.

Phillips said IFC and PHA members usually show up to their own events but don’t attend the other two councils’. The same is true for events held outside of Greek Week.

“I can talk to Yuri (Villa) as much as I want and we can become friends and come up with ideas, but nothing greater will result from that if there are no chapter-to-chapter relationships,” Echols said.

Upcoming partnerships, both social and educational, are in the works. PHA and IFC hand out breakfast every Dillo Day, and MGC will join them this year. They will also team up for a day-of social media campaign directing people to the Lakefill, Echols said.

The four councils’ executive teams also created a social justice education curriculum for their members. Next fall, Phillips said, they will use the curriculum to discuss the legacy of racism in Greek life.

MGC is also looking beyond Greek organizations to cultural and ethnic student groups that it hopes to partner with in the future. Members said they’ve made inroads with groups like the Korean American Student Association and Mariachi Northwestern.

But, Cuadra said, MGC has a long way to go.

“The mental strain, it’s very difficult,” he said. “I am an RA. I’m an engineer on campus. I’m leading (Omega Delta Phi). But that’s the reality of what we have to deal with.”

He paused, then added, “I just wish I had more time to grow with my brothers.”

Due to incorrect information from a source, a previous version of this article misstated the number of undergraduate members in Sigma Lambda Beta. There is one. The Daily regrets the error.