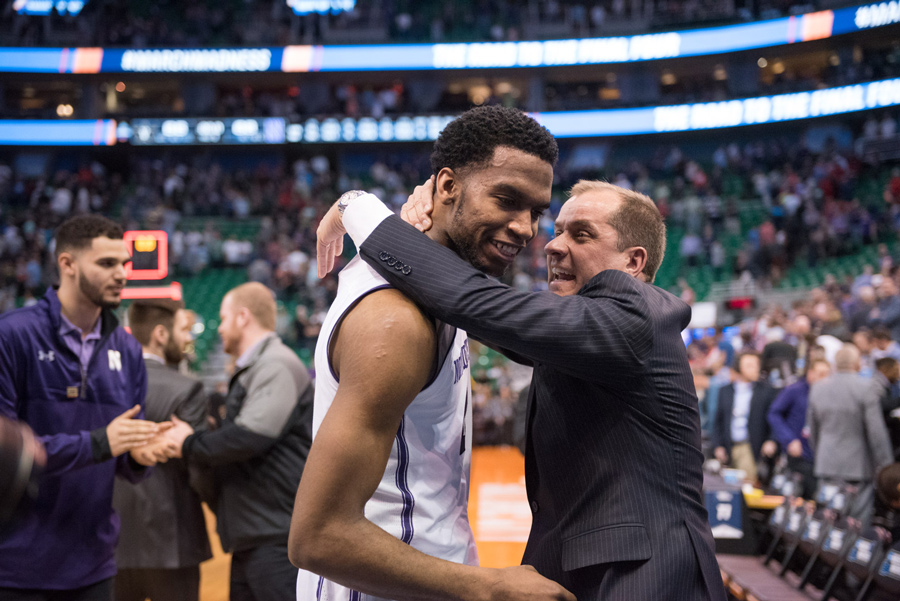 The Big Ten is hiring its next commissioner. If he wants the job, NU’s Jim Phillips could reshape the next decade of college athletics.

What do you give the man who has everything?

He has the second-highest salary of any NCAA Athletic Director, and an office with a stunning view of Lake Michigan. The building he spends his days in is part of a $265 million athletic facility that opened in 2018. The renovated Welsh-Ryan Arena was unveiled four months ago. The student athletes he represents graduate at a 98 percent rate, the highest in the country.

At a university that didn’t have a long track record of athletic success when he took the job in 2008, Northwestern Athletic Director Jim Phillips executed a long-term plan that led to him being named the Sports Business Journal’s 2018 Athletic Director of the year.

Now, the Big Ten might ask him to spin straw into gold one more time.

Jim Delany announced Monday he’d be stepping down from his position as conference commissioner in June 2020. Northwestern President Morton Schapiro will lead the search committee to determine Delany’s replacement.

In the aftermath of Delany’s announcement, Phillips quickly surfaced as a leading potential candidate to take over at the conference’s Rosemont office.

Phillips is “unreachable for comment” for this story, according to an athletic department spokesperson.

The Daily spoke to 11 conference commissioners, athletic directors, college coaches and NCAA representatives who’ve worked with Phillips over the last two decades. They openly said Phillips has qualities that would make him a good fit to lead the Big Ten into an era that could be fascinating and daunting for college athletics.

Where Phillips gets his motivation

Phillips has a reputation for putting the student-athletes he works with above everything else. During a 10-year time span, he’s been on six committees, three councils and a board of governors, and Phillips has used his platform to share this mindset with the rest of the NCAA.

He’s met weekly with athletes dating back to his tenure as the athletic director at Northern Illinois, according to Ricardo Patton, whom Phillips hired to coach the Huskies’ men’s basketball team in 2007.

“He wanted the student athletes to have a positive experience,” Patton said. “That was first and foremost for him.”

After leaving Northern Illinois for Northwestern, Phillips created a plan to reshape NU athletics. A decade ago, the University had outdated football and basketball facilities and a knack for finishing near the bottom of the Big Ten. Since then, every campus athletic facility has been updated, the football team reached the conference championship game and the basketball program qualified for its first NCAA Tournament.

According to Richard Ensor, the commissioner of the Metro Atlantic Athletic Conference who served with Phillips on the women’s basketball NCAA Tournament selection committee, Phillips has a track record that few athletic directors can match.

“He’s proven that he can deliver the promises that you make when you’re receiving a pretty high-profile job,” Ensor said. “He’s done that at Northern Illinois and at Northwestern. He delivers on his promises.”

The radical transformation has impressed the Big Ten as well, said Kurt Zorn, an associate vice provost at Indiana University who worked with Phillips on several conference initiatives in the last decade.

“His peers look at him as a very thoughtful and reasoned voice,” Zorn said. “People will ask him for his view and his opinion on things because he did such a good job on the Division I Council and just because of his history of being a very successful athletic director.”

Outside of Northwestern, Phillips was named the Athletic Director Chair of the Big Ten and participated on the Rose Bowl Management Committee and the Fiesta Bowl Board of Directors. He also worked on the NCAA Awards, Benefits, Expenses and Financial Aid Cabinet, the NCAA Pathways Program and the NCAA Champions Forum.

Because of the NCAA committees he’s worked on, Phillips’ influence has expanded beyond Northwestern to a national prominence. In the early 2010s, he recognized that the NCAA had a flawed leadership council. As the first chair of the NCAA Division I Council, Phillips gave student athletes a vote in major collegiate decisions, restructuring a committee that previously only included older members who may have had elevated statuses, but were more out of touch with the student-athlete NCAA experience.

As chair, Phillips managed 40 committee members from all 32 conferences and created a mutually agreed-on structure of subcommittees, despite different conferences having significantly different priorities and needs.

Phillips’ term on the council expired in 2017, and his major projects at Northwestern are mostly completed. Now, a new challenge could be on the horizon for him.

What the Big Ten needs

Of the several significant issues expected to come onto the table in the next decade — from ending the one-and-done era, to television rights, to gambling, to the College Football Playoff — it’s hard to identify the one that will have the biggest impact on the NCAA.

In the near future, the NCAA will likely have to respond to the end of the one-and-done era in basketball. According to ESPN’s Adrian Wojnarowski, the NBA is expected to allow players to enter the NBA directly out of high school in 2022.

If that happens, the NCAA could go a few different ways: It could allow players to declare for the draft but return to college if they’re not selected. It could create a model that pays players, allowing college basketball to remain an attractive option for elite professional prospects. Or nothing could change.

But the commissioner of the richest conference will certainly get a say in what happens.

The Big Ten’s television rights deal will be up after the 2023 season as well. For the first time, the league’s commissioner will be able to negotiate with new competitors to Fox and ESPN — like Amazon, Netflix and Twitter — for the right to air the league’s games.

In 2018, the NBA signed a deal with MGM Casinos to be the official gaming partner of the league following the legalization of sports gambling across more states. Dallas Mavericks owner Mark Cuban said in a May 2018 interview with CNBC that this revenue could see “the value of (every) team double.” He added that the next Big Ten commissioner could seek a similar deal in the near future that would significantly increase revenue.

Finally, the next Big Ten commissioner will greatly influence the decision to expand the College Football Playoff. After the Big Ten missed out on the four-team playoff the last two seasons, Delany recently changed his view on the matter, arguing in support of an expansion to eight teams.

If Phillips is selected, Esnor said he’ll have the opportunity to shape the future of college athletics.

“Amongst the power five conferences, the Big Ten is one of the true leaders,” Ensor said. “(Phillips) has the passion and the understanding of that world to bring a good resume to the table and to provide good leadership.”

Is Phillips the man for the job?

Even though Phillips has been active on several committees over his tenure, he hasn’t been a public voice in discussions regarding the NCAA’s future. He’s hasn’t taken many stances that have made national news, aside from his response against Northwestern athletes attempting to unionize in 2014.

In 2017, the Chicago Tribune asked Phillips for his perspective on the sports gambling in college athletics. Phillips gave a generic response: “I’m in favor of a federal framework that would provide a uniform approach to any sports gambling in states that choose to permit it. The integrity of college sports remains our highest priority.”

Along with others, NEC Commissioner Noreen Morris said she wasn’t certain which national NCAA issues Phillips would be eager to address, despite working with him for several years as a senior member in Northwestern’s athletic department.

Perhaps one of the only people who fully understands Phillips’ perspectives on major issues is Schapiro, who will work with Korn Ferry, an organizational consulting firm, to determine the next commissioner.

When asked how his close relationship with Phillips would influence Phillips’ candidacy, Schapiro stressed this would be a confidential process. However, he clarified what the conference will be looking for in a candidate.

“Jim Delany has been a forward-thinking, collaborative and decisive leader,” Schapiro said in a statement to The Daily. “We’re certainly looking for someone who can bring those same qualities, and who can build on the foundation that (Delany) established over the past three decades.”

While the 11 individuals who’ve worked with Phillips directly at a university or on the NCAA council — ranging from the assistant athletic director at Tennessee to the director of athletics at South Dakota State University — didn’t directly endorse Phillips for the job, they said they understood speculation about him being a candidate.

It’s unclear whether or not Phillips would have any interest in moving on from Northwestern, even if the Big Ten offices are in nearby Rosemont. After all, NU football coach Pat Fitzgerald, arguably the University’s biggest name in college athletics, hasn’t pursued opportunities to go to Michigan or the Green Bay Packers.

“I don’t know if he wants to leave the campus environment to go to a commissioner’s office,” said Brian Shannon, who has worked with Phillips on the Division I Council. “But it wouldn’t surprise me at all that his name would be mentioned (for commissioner) though because of his leadership ability.”