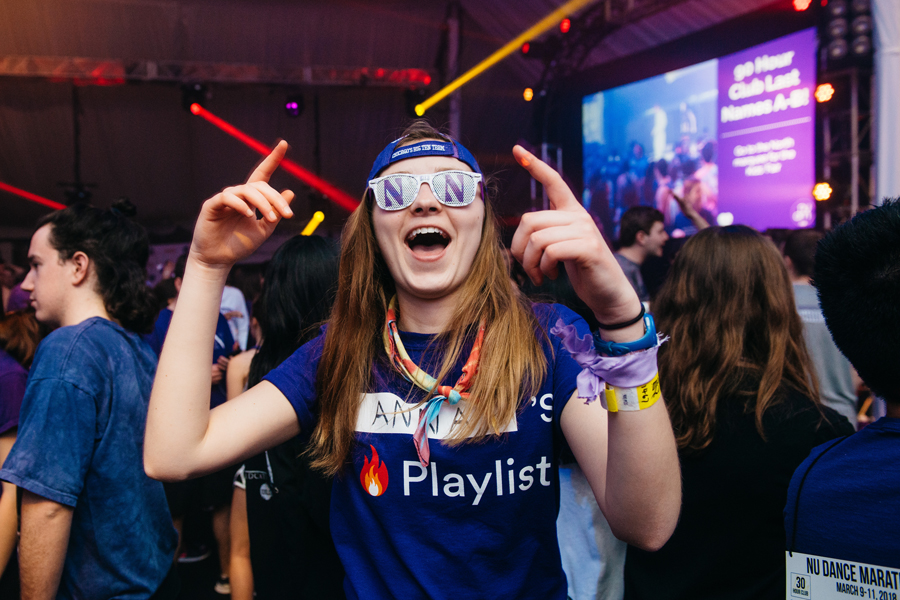 A dancer during Block 7 of Northwestern University Dance Marathon 2018. NUDM, which is often cited as one of the largest student-run philanthropy in the U.S., routinely donates seven-figure amounts to its chosen beneficiary every year. (Daily file photo by Noah Frick-Alofs)

A dancer during Block 7 of Northwestern University Dance Marathon 2018. NUDM, which is often cited as one of the largest student-run philanthropy in the U.S., routinely donates seven-figure amounts to its chosen beneficiary every year.

The final countdown to the 30 hours in the tent

The first warm days of Spring Quarter at Northwestern are often relished in a campus-wide celebration. Students bike, jog and picnic out on the Lakefill, sink their feet into the sand at Evanston Beach, all the while combating their vitamin D deficiency from the everlasting winter. Rather than soaking up time in the sun, however, the Northwestern University Dance Marathon executive board spent that time last year locked in a meeting room to make one of the most important decisions of the quarter: picking the 2019 beneficiary.

“I remember it was the first beautiful weekend of Spring Quarter. We were all strangers … coming from all walks of life and all in love with DM,” Medill senior Michelle Galliani said. “We didn’t know each other yet but we were told right off the bat that this would be the most important decision we would make — but the fact that it was our first one was intense.”

And the stakes are indeed high — NUDM, which is often cited as the largest student-run philanthropy in the U.S., routinely donates seven-figure amounts to its chosen beneficiary every year. In 2018, the organization gave nearly $1.18 million to Cradles to Crayons, a nonprofit that provides supplies such as coats and backpacks to low-income or homeless children in Chicago.

The application process for potential beneficiaries is competitive. Gallani, the group’s marketing co-chair, said NUDM receives upwards of 100 applications most years. GiGi’s Playhouse, the 2017 beneficiary, applied for 10 years in a row before finally being selected.

So, after days of debating and deliberating, the executive board reached a verdict. This year, the event’s proceeds will benefit Communities in Schools of Chicago, a local nonprofit whose goal is to provide Chicago Public Schools students the means to succeed and graduate.

The relationship between a beneficiary and NUDM extends far beyond DM weekend, though. Medill junior and marketing co-chair Jennimai Nguyen described the partnership as a continued connection strengthened through follow-ups from executive members, social media interactions and support from previous beneficiaries.

“It’s not like once their year is over that we forget about them and never talk to them again,” Nguyen said. “We’re trying to get people to connect with these beneficiaries and engage and want to be involved with them.”

As the marketing chairs, Galliani and Nguyen were faced early on with the daunting task of convincing NU students to dedicate 30 hours of their life to the cause, and all on a weekend when end-of-the-quarter exhaustion is kicking in and exam season is in full swing.

Nguyen recalled hearing about the organization at the activities fair when she was a first-year. She thought the idea of dancing for 30 hours straight was “crazy,” which is exactly what compelled her to sign up.

But let’s face it: even without the activities fair, NUDM’s presence on campus is impossible to miss — a view echoed by Communication sophomore Billy Loveman, who will dance in the tent for the first time this year.

Loveman, who transferred to NU from Syracuse University, said he was instantly drawn by the masses of students who cared about the event and its cause. Compared to his previous school, which holds a similar event every year, he said NUDM’s scope is unmatched.

As a local from nearby Northfield, Illinois, Loveman said DM gave him novel reasons to interact with his neighbors back home. To raise money for his page, he went “canning” almost every weekend of winter quarter, submitting himself to doing push-ups or “the worm” to attract the attention — and generosity — of passersby.

“I ended up raising a lot of money each time,” Loveman said. “It’s pretty surprising how people are so caring and charitable for a cause like this.”

As the productions co-chair, SESP senior Meredith Mackey is in charge of making the experience enjoyable for Loveman and his fellow dancers. From reaching out to celebrities for shoutout videos to finalizing the 10 blocks’ themes, Mackey hopes to make the event unforgettable for all involved.

Last year, American treasures like former vice president Joe Biden and actor Nick Offerman sent dancers into a frenzy with their pop-up support videos. Mackey said that while the process of touching base with these high-profile celebrities can be tedious, it’s ultimately very rewarding for everyone in the tent.

“It’s so worth it to see people’s reactions,” Mackey said. “I even had a celebrity personally text me their video and (say) they’re going to tune into the live stream to see when their video is playing, so it really does build connections.”

In the vein of keeping tent morale up, the productions team carefully chooses the block themes to be relevant, keeping with pop culture trends and to the cause. This year, the themes range from Block 3’s “Gimme Gimme Gimme a Block After Midnight,” dedicated to the musical hit “Mamma Mia” and iconic ’70s disco music, to the final block’s “School of Block,” a subtle tribute to CIS Chicago.

Mackey has been on the productions team since her freshman year, and will soon be joining DM’s 120-hour club, which recognizes dancers involved in the organization all four years. She said NUDM has played a key role in shaping her Northwestern experience, from Block 9 adrenaline making her unknowingly tear her Meniscus two years ago, to Block 10’s community and tears of joy ultimately making the sleep deprivation worth it.

At the end of the day, Mackey said NUDM isn’t about dancing in a tent, but rather about contributing to a larger cause.

“We never claim to save the world — we’re just trying to do what we can with what we have,” Mackey said. “Someone on exec last year put it best when he said, ‘If everyone could experience one moment of the magic of Block 10, the world would be a better place.’”