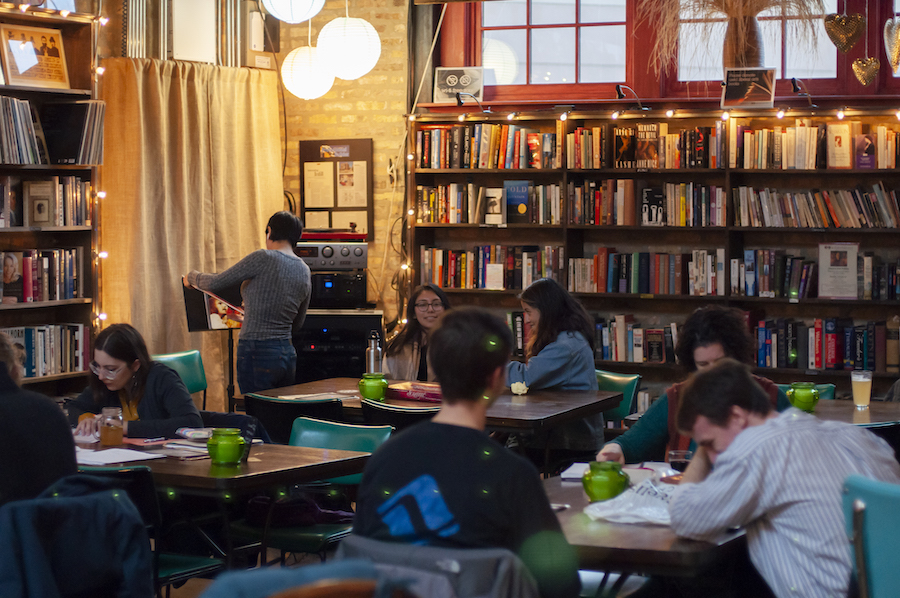 Kibbitznest is a self-described “bookbar” that invites you to “take back control of your humanness.” That means comfy chairs, lots of board games, and — gasp — no WiFi. (Alex Schwartz/Daily Senior Staffer)

Kibbitznest is a self-described “bookbar” that invites you to “take back control of your humanness.” That means comfy chairs, lots of board games, and — gasp — no WiFi.

When most people get dressed for a night out in Chicago, they might pick a festive shirt and some sleek pants, maybe adding a flashy pair of shoes if they’re feeling up to it.

But as some friends and I got ready to head down to Kibbitznest Books, Brews & Blarney in West Lincoln Park, I was rummaging through my closet in search of my most comfortable sweater.

Run by a nonprofit of the same name whose mission is to encourage face-to-face communication, Kibbitznest is a self-described “bookbar” that invites you to “take back control of your humanness.” That means comfy chairs, lots of board games, and — gasp — no WiFi.

Kibbitznest may be the only bar where you can’t rely on your phone during every lull in a conversation. Evidently, the folks behind the space think its “WiFi-Free Zone” will make those conversations more meaningful; after all, the Yiddish word “kibbitz” refers to standing around, talking and making wisecracks.

But if you’re worried about it being awkward, don’t be intimidated by the screen-averse atmosphere — there’s plenty of distractions to pique your interest at Kibbitznest. Walking in, we were greeted by a stand of glossy magazines and newspapers, a wealth of cozy seats, and shelves filled with a plethora of board games. The walls are lined with books, knick knacks and decorations — it evoked a Brooklyn hipster vibe, but not in the pretentious way of an actual Brooklyn bar. Typewriters sat in front of bar stools, and the only screens in sight were a few televisions playing old movies.

We picked up a game of Bananagrams and headed to a room in the back where classic rock records spun and colorful paper lanterns hung from the ceiling. After claiming a table and skimming the menu, we went to the bar to order some conversation fuel.

But beware: Opening up a menu at Kibbitznest might remind you of anxiously confronting Caesar during registration.

The “Economics” section includes marinated olives, spiced marcona almonds and dried fruit. “The Classics” offer a jumbo Chicago-style hot dog along with a selection of decadent cheese plates. “Poetry” is for those with a sweet tooth: local, homemade Bobtail ice cream, cookies, brownies and their relevant combinations. There’s also gourmet tea and coffee courtesy of “The Natural Sciences.” Non-alcoholic beverages are — no-brainer — listed under “Religious Studies.” By the end of the night, you just might leave Kibbitznest having ordered a full class schedule’s worth of items.

The cocktail tab features Kibbitznest’s takes on the classics as well as their own concoctions. My friends ordered a “1941 Moscow Mule” (made with small-batch vodka) and “Don Pedro’s Paloma” (a dangerously fruity mix of blanca tequila, grapefruit juice, lime, and blood orange juice). I went with a pot of rich, fragrant hibiscus tea (had I felt more adventurous, they also offer it spiked).

To complement our drinks, we split a cheese plate that arrived blooming with apples, grapes, crackers, jam, honey and bread. Yes, it was $21, but let me tell you: It was some really good cheese.

With our drinks and cheese in hand, we sat down for a high-spirited game of Bananagrams (which I lost, per usual). Soon, and after switching to the less-competitive Taboo, we had a hankering for dessert and ordered an ice cream sundae: scoops of cookies and cream, cookie dough, and salted caramel pretzel drizzled in chocolate sauce and topped with real whipped cream and a cherry.

It may have been partially due to the rain outside that evening, but I couldn’t help but cozy up in the hygge haven that Kibbitznest offers. And while the bar asks its visitors to divorce from their phones for the evening, it doesn’t feel like stepping back into the past. Instead, it shows us an alternative for the present — one where we take the time every so often to disconnect, eat, drink and be a little more human.