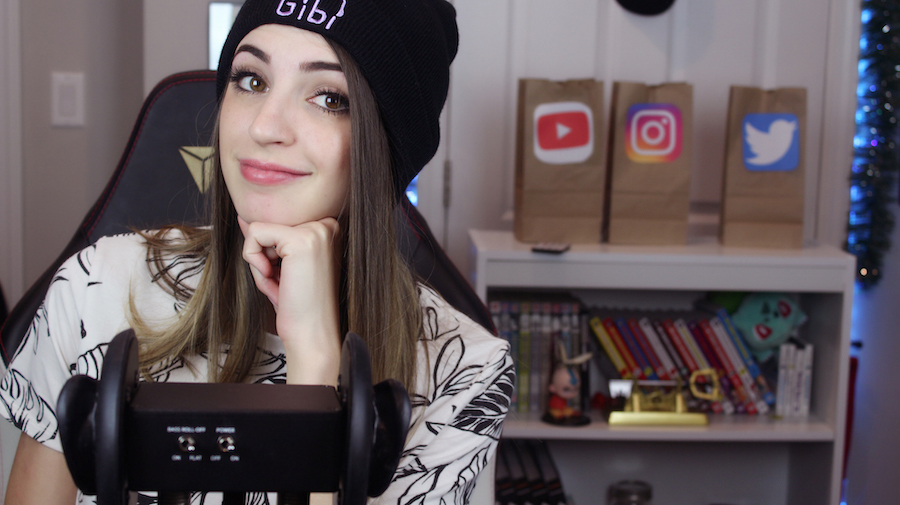 As the ASMR sensation grows online, a Northwestern alumna finds her place among the whispers

The YouTube video opens on a smiling young woman facing the camera. She makes soft fluttering noises with her fingers, moving them from side to side as she slowly and delicately whispers into a highly-sensitive microphone. Her cadences crackle like gentle rain on a windowsill: “Good evening. My name is Gibi. Welcome to my channel.”

There’s not an all-caps clickbaity title or an incessant plea for subscribers in sight, no trace of Logan Paul, Miranda Sings or a Vine compilation. This is another side of YouTube, where relaxation takes priority over vlogs and pranks and funny cat videos. It’s the world of ASMR, and Gibi (Communication ’17) is riding a wave of whispers straight to the top.

The term “ASMR” was coined in 2010 by Jennifer Allen, one of the first people to push research on what was then a tiny community of people furtively whispering into their webcams, just trying to help each other fall asleep.

The pseudoscientific acronym describes the pleasurable feeling some people — including Gibi, who asked that her real name not be revealed for privacy concerns — experience when they hear certain sounds or voices, look at satisfying videos or pictures or experience physical touch through haircuts or massages. Members of the ASMR community — ASMRtists, if you will — often refer to this sensation as “tingles,” elicited by different triggers like crinkling paper, playing with slime or simply whispering in a soothing voice.

Nearly 10 years later, YouTube has a catalogue of tens of millions of ASMR videos from thousands of channels. The phenomenon has its own subreddit with over 150,000 members and too many Facebook groups to count. It’s attracted celebrities like Jimmy Kimmel, Sarah Silverman and Cardi B, and was even featured in a 2019 Super Bowl ad.

As ASMR has become mainstream, so has Gibi. In the two years since she went full-time with her channel, she’s about to hit 1.7 million subscribers. Her videos — ranging from her tapping on a piece of cork to cosplaying as Linda from “Bob’s Burgers” — have been collectively viewed over 400 million times.

Gibi said she started watching ASMR videos during high school when she went down a “YouTube rabbit hole” and began using them regularly to fall asleep and deal with anxiety related to sleeplessness. They were still a big help to her once she got to Northwestern — she’d even play them in the background when writing essays in the Fisk Hall basement computer lab where she worked.

Her fiance, Ben (McCormick ’15), who she met at NU, said he has yet to watch a full ASMR video. He was surprised when he found out early on in their relationship that Gibi watched them to fall asleep.

“I’m a very scheduled person,” Ben said, “so I was just like, why the hell do you need to watch something to fall asleep? Just go to bed at the same time every day.”

Gibi said she had wanted to start making her own ASMR videos for a while, but it wasn’t until the summer before her senior year at NU that she finally decided to take the leap.

“If I wanted to have the free time to start a channel, it had to be now.”

By January 2017, Gibi had already reached 100,000 subscribers. That year’s reduction in School of Communication requirements, along with credits she’d racked up taking summer classes, meant that she could take that Winter Quarter off to focus on creating videos full-time.

As her channel took off, Gibi said she began asking her film friends at NU for technical advice, though she still remained “shy” about her budding career on YouTube. She said she remembers having to film at night while her roommates were all out at bars to minimize outside noise, and that her video quality was “heinous.”

By the time Gibi graduated from NU, her channel had over 350,000 subscribers. Just a year later, that number reached one million.

Now, Ben manages the business side of Gibi’s channel, answering emails, tracking online metrics and setting up product sponsorships. For him, it’s a way to apply his business training from NU in addition to working a corporate job — he described the ASMR community as a business “playground.”

While standing in front of a camera for hours may seem daunting to some, Gibi said her background in theatre and film prepared her well for it.

“When I talk to a camera, I’m very aware that people are going to see it,” she said. “So I really do feel like I’m talking to somebody…. It definitely makes me radiate positivity from the inside.”

After having uploaded more than 370 videos, Gibi likes to think that she’s gotten the hang of it. However, having such a huge following on the internet has meant that not all of Gibi’s viewers are her friends.

“You’ll have the haters … they’re jealous. They just don’t like you,” she said. “And then you’ll have the people who are in love with you, which are honestly more scary.”

While she was still a student, Gibi said she received messages from people who were trying to find out where she lived, so she filed several preemptive reports with campus police explaining the situation in case an incident were to occur.

Gibi said she, like all other famous YouTubers, had to become much more savvy of her online presence since creating her channel, and that she keeps her “private life very private,” going through cyber security lockdowns and not releasing her real name to the public.

But, for the most part, the ASMR community has been much more welcoming and positive than other communities on YouTube, Gibi said. She’s received countless messages and comments from people who say her videos help them with insomnia, anxiety and even PTSD. She attributes this to the positivity and relaxation that ASMR videos provide, because she’s been on the other side of it too.

“I watched ASMR because I had terrible anxiety at night, because I couldn’t sleep, so I get it,” she said. “You’re just so grateful that somebody is making this content that you can fall asleep to, that you can relax to and everything, but it’s still mind-blowing when somebody comes to me and says that I can do that for them.”