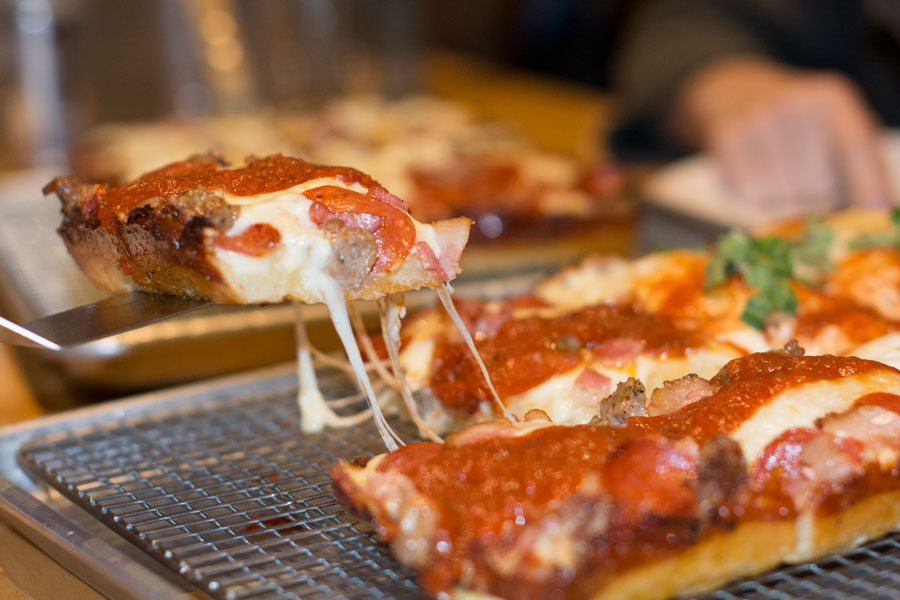 Move over, deep dish. Union Squared is serving up a better Midwestern-style pizza in town

There’s a different kind of pizza in town that’s been flying under the radar, and it just might be better than the Chicago-style deep dish all Midwesterners are bred to love.

Union Squared, located at 1307 Chicago Ave., serves authentic Detroit-style pizza in a small but cozy space that is worth the walk from campus to the Main-Dempster Mile. The restaurant has thrived in Evanston since opening in 2016, and has gained some buzz in the Chicago food scene after opening up a stall in Revival Food Hall that same year and then a new restaurant in Wrigleyville in 2018.

I’ll admit that I, a New York-native, never fully got on board with deep dish. I am required to defend the New York slice I grew up eating, and deep dish always feels more like a demanding project than a meal. I will enjoy it from time to time, but not without putting on stretchy pants and taking a food coma-induced nap afterwards (and, of course, insisting to everyone around me that deep dish is not real pizza).

Union Squared’s pies, while certainly decadent, felt more like real pizza and I didn’t need to unbutton my jeans after eating. The square slices remind me of the thick, fluffy Sicilian-style pizzas found in most New York pizzerias and, similar to deep dish, they have a crispy and caramelized crust. It is a happy and delicious medium between thin crust and deep dish.

Some friends and I sat down at one of the large wooden tables in the compact space, eagerly perusing the menu while an eclectic playlist (think everything from Elton John to Kansas) played in the background at just the right volume.

To help first-timers like me, Union Squared advertises the anatomy of a Detroit slice on one wall: the thick crust (baked in square pans made in Michigan) is topped with melted brick cheese — a cheese from Wisconsin similar to cheddar but softer and typically shaped like a brick. The pie is then layered with toppings before and after a “Detroit-sized helping” of red sauce.

The menu is small, featuring a few salads and about a dozen pies. The drink menu has a strong selection of canned beers, wines and cocktails, but we quickly bypassed the drinks and salads to get straight to the pizza.

The pies range from classic — burrata margherita and four cheese and pepperoni — to some more unconventional flavor combinations. We went with a mix of both, ordering the burrata, pepperoni, the Godfather (sausage, pancetta and pepperoni) and the Detroit Michoacan (chorizo, pineapple, red onion and roasted jalapeno cream), all at the recommendation of our waiter.

While the burrata was indistinguishable from the brick cheese used on the rest of the pies, it is a solid option for those who prefer just cheese and tomato. The pepperoni was similarly simple and satisfying, but the real star and big surprise was the Detroit Michoacan.

I was hesitant to order a pizza that had pineapple on it, but the server pointed it out as a staff favorite and the promise of a spicy kick from the jalapeno and chorizo drew me in. The pie gets its name from a play on words: Michoacàn is a state in Mexico that also recalls the pizza’s origin’s in Michigan.

Everyone at the table was pleasantly surprised by the pineapple-topped pizza — one of my friends insisted she would only have a bite but then went back to finish a whole slice.

The pizza will admittedly cost you more than Dominos (around $25 each), but each pie can be made half-and-half so you can try a variety of options and some are also available as “quarter-pies” for less than $10.

Perhaps the only real downfall to Union Squared is the tiny space, which is particularly cramped in the winter months when the outdoor beer garden is closed. However, I am willing to forgo some of my personal space to indulge in the crispy, layered, better-than-deep dish square pies, and I bet you might, too.