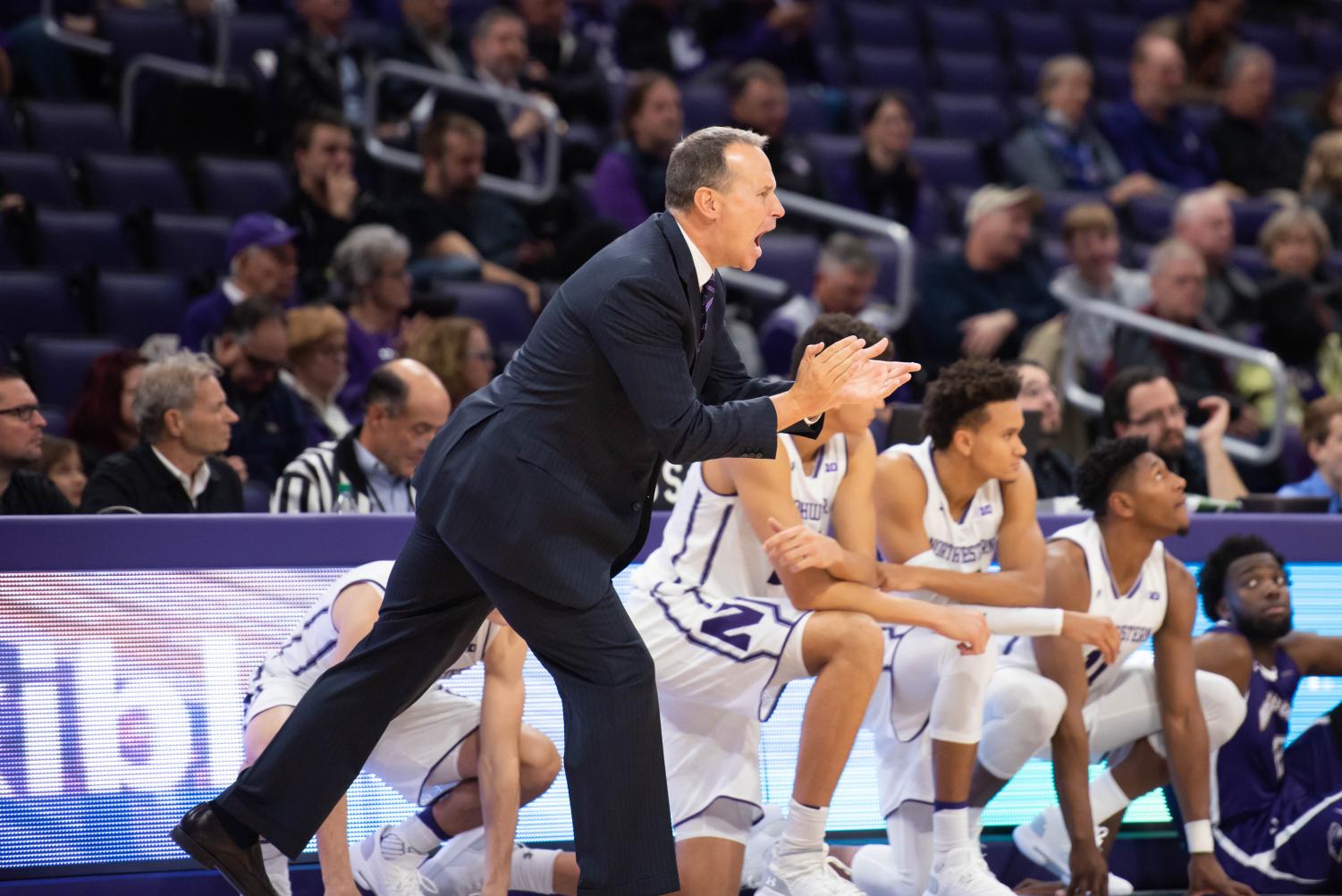 At the end of his team’s win against Indiana last week, Chris Collins made his way to the opposite bench to shake hands with Hoosiers coach Archie Miller. He didn’t even know that he had just become the quickest coach in program history to collect 100 wins.

The 73-66 victory over Indiana gained Collins admittance into a club with only two other members: Bill Carmody, who won 192 games and made four trips to the NIT between 2000 and 2013 at NU; and the program’s winningest coach, Arthur Lonborg, who between 1927 to 1950 tallied 236 wins, two Big Ten titles and an unofficial national title in 1931.

It was a milestone victory in Collins’ career with the Cats, but it was also his 427th career win as a coach in college basketball. Collins spent his pre-NU career learning from two of the sport’s most acclaimed — Harvard coach Tommy Amaker and Duke coach Mike Krzyzewski. Collins worked on Amaker’s staff — who has amassed 659 career wins at three schools — at Seton Hall from 1998 to 2000 before taking a job at his alma mater under the legendary Krzyzewski — the winningest coach of all time, with 1,117 wins — for 13 seasons.

The Daily sat down with Collins on the heels of his 100th win and talked through some of his biggest wins at NU during his five and a half seasons in Evanston. 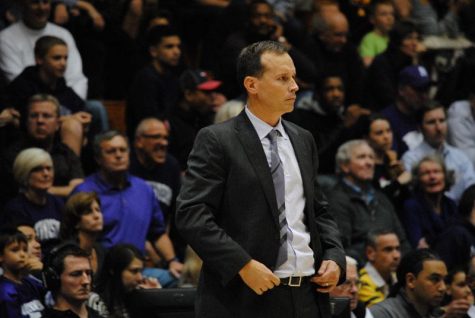 It wasn’t the prettiest of games — NU air balled four of its shots in the first half — but Drew Crawford scored 25 points and collected 11 rebounds to give the Cats their first win of the Chris Collins era. It was also a good omen for what would come ahead: Collins’ two predecessors Carmody and Kevin O’Neill had both lost their career openers.

What Collins says now: “(I remember) how nervous I was. Just the unknown of what was ahead … It’s your first game. You always remember that, walking out and being out here in Welsh-Ryan. I remember the nerves, and so badly wanting to get that first win. It was a good night. We got off to a little bit of a slow start, it was a low-scoring game, but I remember winning and how excited we all were because it was the start of a new journey.”

This was Collins’ first big-time win with the Cats. NU hadn’t beaten Wisconsin on the road since 1996, and had never won in the Badgers’ Kohl Center, but Crawford scored 30 points, and the Cats forced current NBA players Sam Dekker and Frank Kaminsky to shoot 5-for-18 from the floor. That Wisconsin team would advance to the season’s Final Four.

What Collins says now: “That was a really special night. For me, that was kind of the first sense of, ‘You know what, we might be able to do this.’ The first time we’d played Wisconsin was a month earlier, and that was my first Big Ten game. And we were losing 40-14 at halftime. I remember that being a really low moment … because part of me was unsure about what was going to lie ahead. All of a sudden, you’re getting killed and you understand what the tough road is going to be ahead of you. And then a month later, to go there with that same group of guys, and to win in the Kohl Center, against a Final Four team. I still, to this day, have a picture of those five guys that were on the floor at the end of the game above my desk. That’s something that I’m going to carry, because to me that was one of the most special nights.”

The Cats entered this one on a ten-game losing streak, and when Iowa hit a buzzer-beater to send the game to overtime, it seemed like the streak might stretch to 11. The NU defense — which finished with 12 blocks — held steady in overtime. And with help from then-freshman guard Bryant McIntosh, who scored 18, the Cats picked up a memorable win.

What Collins says now: “Going through that 10-game losing streak was probably the hardest time of my six years, just because we had a really young group of guys that were working really hard and we weren’t seeing any rewards. We had gone through a stretch, we lost a lot of games, really close games at the end, and we were consistently coming every day and practicing and we weren’t winning. We were 1-10 (in the Big Ten), we had lost 10 in a row. We played Iowa and I remember we went to a zone defense, we hadn’t played zone the whole year, and we changed our whole defense. It was working, and they actually hit a 3-pointer at the end of regulation to tie the game and to send it into overtime, and I’m like ‘Oh my gosh, here we go again.’ We were able to prevail in overtime and win. That led to us winning five of our last seven. That was really important, for that group … McIntosh, (Vic) Law, (Scottie) Lindsey, they were all freshmen, so that was obviously another memorable win towards the growth of our program.” 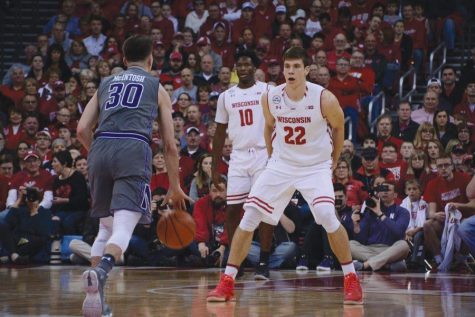 The Badgers were ranked No. 7 in the country at this point in the 2016-17 season, and NU had to face them without its leading scorer, Scottie Lindsey, who was sidelined for three games. That wouldn’t stop the Cats, though; McIntosh scored 25 and NU defeated a top-7 team for the first time since 2012.

What Collins says now: “That was a big night because we had just lost Scottie Lindsey to mono. We knew we were in position for the postseason. We had played really well when we lost Scottie, we were 7-2 in the league, 18-4 (overall) and we knew we were going to be without him. And then all of a sudden, you’re on the road against a Top 10 team in one of the toughest places to play. And to win that game without Scottie that night, and the way everyone stepped up was another huge win towards us making the NCAA Tournament that year.” 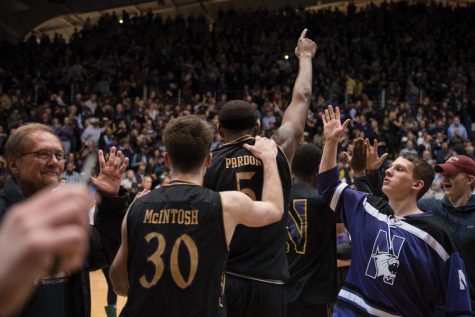 The Pass. The Shot. The Game. This win will live on in NU folklore for the rest of Collins’ coaching career. Nathan Taphorn launched a full-court inbounds pass to Dererk Pardon, who laid it in under the basket, and the Cats essentially solidified their place in that season’s NCAA Tournament.

What Collins says now: “It’ll always be special. To me, that was kind of the storybook finish to the movie. It was the team that had never gotten to the tournament, and you go through and you’re playing great and you lose one of your star players for a month, you lose some games and now it’s in doubt. I mean, we still might have gone, but we knew we needed one more marquee win in order to go to the tournament. So to be at home in front of a sellout crowd, to have it come down to the last second, full court pass, big drama, it was almost too good to be true. What I remember is just sharing, after that, the time in the locker room with those guys. The tears of joy, the raw emotion of what we had just accomplished not only for that group but also the fans and the people that follow the program that we’re finally going to see a Northwestern team play in the NCAA Tournament, was a pretty good feeling. 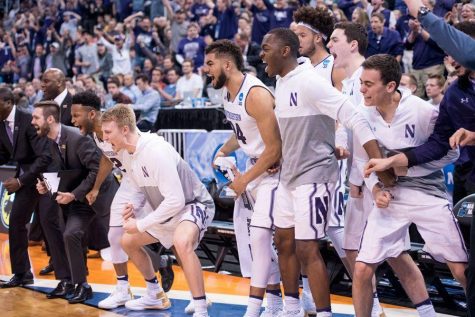 Collins knew what the feeling of the NCAA Tournament was like — three seasons before he’d arrived in Evanston, he’d been on the court as the confetti fell and as Duke accepted its national championship trophy. He knew that it was important not just for his team to get to the dance, but to make themselves known at the party. With 25 points and a pair of late-game free throws from McIntosh, that’s just what the Cats did.

What Collins says now: “The experience of being in the tournament was great, but I think it was really important for us to not just be there. We wanted to show that we truly belonged and to do that, you’ve got to win. It was a hard-fought game, went back and forth. We were winning, they came back and took the lead, the foul at the end of the game to put Bryant to the line, we make the two free throws, we get a stop. I think it stamped what that team had accomplished. They had so many firsts that they did, they got to the semifinals of the Big Ten Tournament, they went to the NCAA Tournament for the first time, I think we won six consecutive league games for the first time ever. To go to the NCAA Tournament, to not only be there but then advance to the next round, I think it was a special victory.” 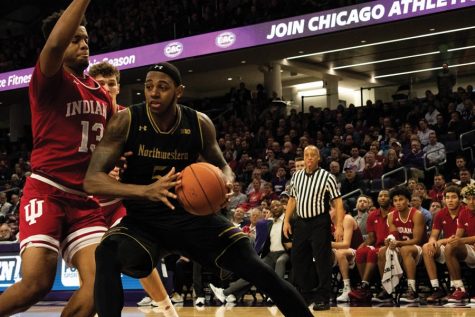 It was a momentous evening all around — redshirt junior forward Aaron Falzon dropped a career-high 21 points and Pardon scored his 1,000th career point — as Collins finally entered the triple digits last week and the Cats collected their third conference win of the season.

What Collins says now: “I really didn’t know when it happened. They told me after the game. I get so locked into the present and what we’re doing the next game but anytime you reflect on things like that you kind of go back to the beginning. And to hear from a lot of the former players afterwards, especially the guys that were here in the beginning, Alex Olah, Drew Crawford, Sanjay Lumpkin, guys like that, I think everyone takes pride in a number like that. Any time coaching accomplishments are talked about, they’re really a program accomplishment. I’m not out there playing, so in order for us to win the players (have) got to do it. To be here for five-plus years, to be able to get a 100 wins is something that we’re all proud of. Hopefully the next 100 come a little bit sooner.”