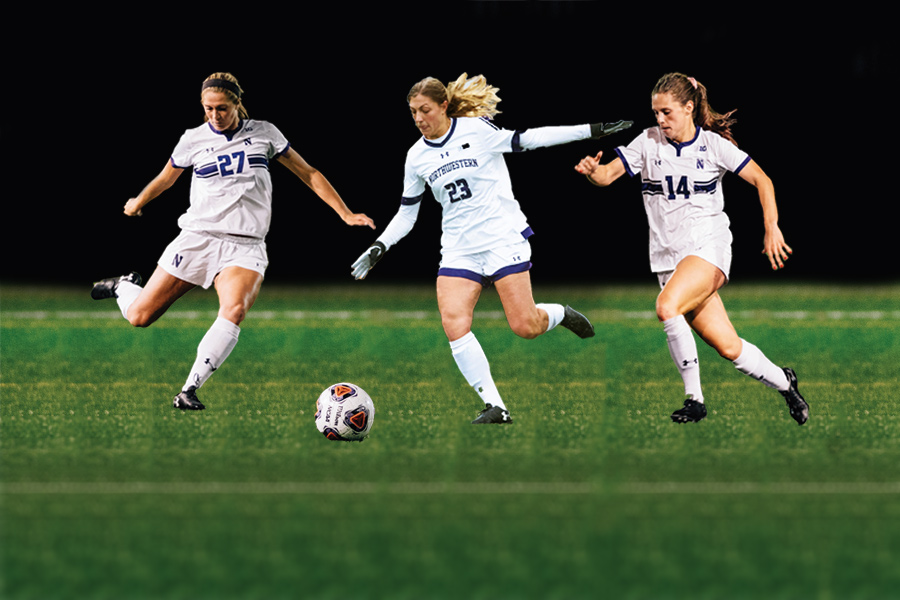 Kayla Sharples, Hannah Davison and Marisa Viggiano. All three were selected in the 2019 NWSL Draft. (Graphic by Evan Robinson-Johnson)

Kayla Sharples, Hannah Davison and Marisa Viggiano. All three were selected in the 2019 NWSL Draft.

When coach Michael Moynihan was recruiting Kayla Sharples, Hannah Davison and Marisa Viggiano, he was selling a program without a history of success, the best facilities in the conference or any track record of placing players in the world’s premier women’s soccer league after graduation.

Then there were slow changes. Ever since Sharples’ game-winning header that won the Big Ten in Nov. 2016, Northwestern’s reputation has risen as fast as any program in the country, as the team made four consecutive postseason tournaments and evolved into one of the best defensive teams in the NCAA.

And now the trio that led the winningest class in Wildcats history and paved the way will be playing at the highest level in the sport.

In Thursday’s National Women’s Soccer League Draft, Sharples and Davison were selected by the Chicago Red Stars and Viggiano was chosen by the Orlando Pride. Sharples was the first NU player to ever be selected into the NWSL, and by the end of the hour the other two had been tabbed to play in a league that features many of the top international stars in women’s soccer.

“The groundwork has been laid for establishing the platform for this program,” Moynihan said. “They’ve put in an awful lot of hard work in to raise our program to a pretty high level in a pretty short time.”

In her collegiate career, Sharples started every game and scored six game-winning goals, earning the center back two Third-Team All-American recognitions. She was able to share the backfield with Davison, who has known Sharples long before their time in Evanston.

Sharples and Davison were teammates on Chicago’s Eclipse Select Soccer Club, a premier high school club team that finished second in the nation during their senior year of high school. And the coach who put them in the backfield together years ago will be coaching them again in the NWSL.

Chicago Red Stars head coach Rory Dames doubles as the director of coaching and player development for Eclipse Select, and he told The Daily his prior relationships with Sharples and Davison factored into their selection. Dames said he’s known the two center backs since they were in sixth grade — much longer than Moynihan has — and he’s excited to see how they fare in a league filled with the best players in the world.

“The last time I was around them, they were young kids, and now they’re young women,” Dames said. “They’ve each added different aspects to their game. Both of them always possessed elite athleticism, and I think their ability to read the game and make passes out of the back has become much technically cleaner.”

The transition from college to professional soccer will be more difficult than any on-field challenge Sharples, Davison and Viggiano have faced, but a quirk in this year’s NWSL schedule will give them more opportunity than usual, Moynihan said.

With the FIFA Women’s World Cup taking place this summer in France, most of the league’s top talent will miss a significant portion of the season to play for their country. Because Dames has been through trying moments, like a national championship match, with Sharples and Davison, he said they’ll have the opportunity to make an impact early on in their careers.

“With the World Cup (this) year, having players that you’re familiar with, that you know their games, that you trust on the field, is so important,” Dames said. “Players that know the culture and know what the expectations and demands are, I think those are huge assets to have during a World Cup year because it opens up a lot of opportunities that aren’t there in a normal year.”

With another reunion for Sharples and Davison in their home city of Chicago, the NU seniors will be able to fit their class schedules around team practice and graduate on time, according to Dames.

And, for the first time ever, the Wildcats will be represented among the best in the sport.