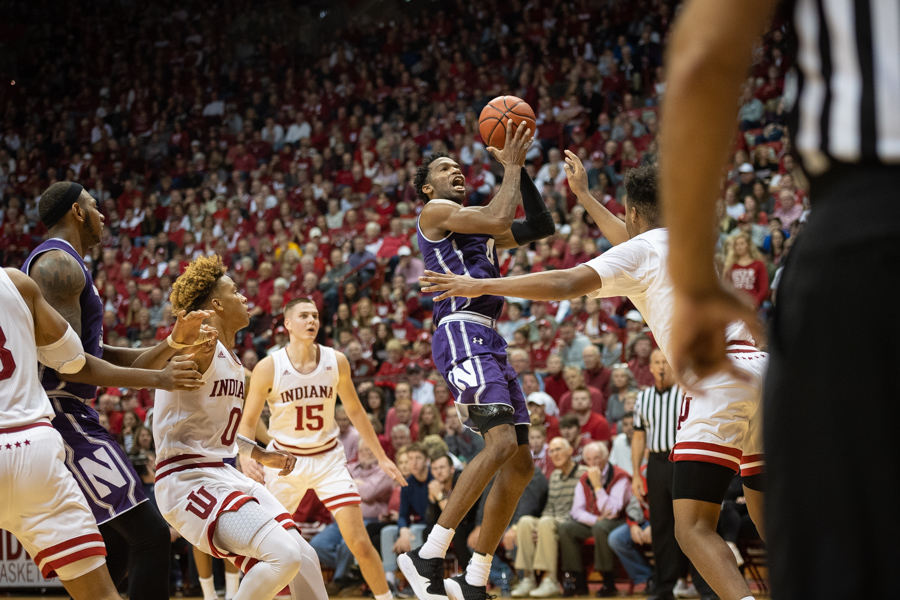 Vic Law is surrounded by Indiana defenders. Law and the Wildcats struggled in the final moments on Saturday. (Noah Frick-Alofs/Daily Senior Staffer)

Vic Law is surrounded by Indiana defenders. Law and the Wildcats struggled in the final moments on Saturday.

Dererk Pardon’s 24 points were not enough to overcome the onslaught of buckets from the Hoosiers (6-2, 1-0 Big Ten), who shot 55 percent from the field. Forward Juwan Morgan and five-star freshman guard Romeo Langford combined for 37 points as they caused repeated breakdowns in the Wildcats’ (6-2, 0-1 Big Ten) normally stout defense.

“We played pretty well. We can sit here and talk about all the things we didn’t do, but sometimes you have to credit Indiana too,” coach Chris Collins said. “They’re a good team. It was a dogfight and it went down to the last possession, and they made a shot and beat us.”

With Morgan out due to a late-game injury, Langford put the Hoosiers ahead for good on a floater with 39 seconds left. After a timeout, Langford deflected a pass intended for Vic Law off the senior forward’s hands, leaving the Cats down 2 points with 32 seconds left and without the ball.

Hoosiers coach Archie Miller credited the visitors’ effort and said he was happy to outduel a tricky opponent.

“They have some really, really tough concepts to defend, and they do a great job of playing with Pardon not only in the high post but the low post as well,” Miller said. “They can control the game without it being sped up. They did a great job coming in here and battling us.”

Pardon led the way, but the Cats also got solid contributions throughout the lineup. Law had 16 points, Taylor chipped in 9 and junior forward A.J. Turner, who fouled out at the end of the game, added 9 more.

On the other side, Langford was the star of the show. His 20 points came on just 13 shots, with a breakaway dunk and stepback three-pointer among the makes. The do-it-all guard also iced the game both offensively with the floater and defensively with the deflection.

“It’s a hard shot. He’s a good player,” Collins said of the floater. “We did a good job on him most of the night. … He made a leaning 14-foot shot under pressure. That’s what really good players do.”

The first conference game was a step in the right direction for the Cats, who lost by 20 points on this floor to an inferior Indiana team last season.

However, the Big Ten is also much improved this season, and NU may look back on this as a missed opportunity to snag a crucial conference win.

“I feel badly for my guys, because I thought our effort was worthy of winning today,” Collins said. “We did everything we could do to put ourselves in a position to win. We just didn’t finish the deal.”