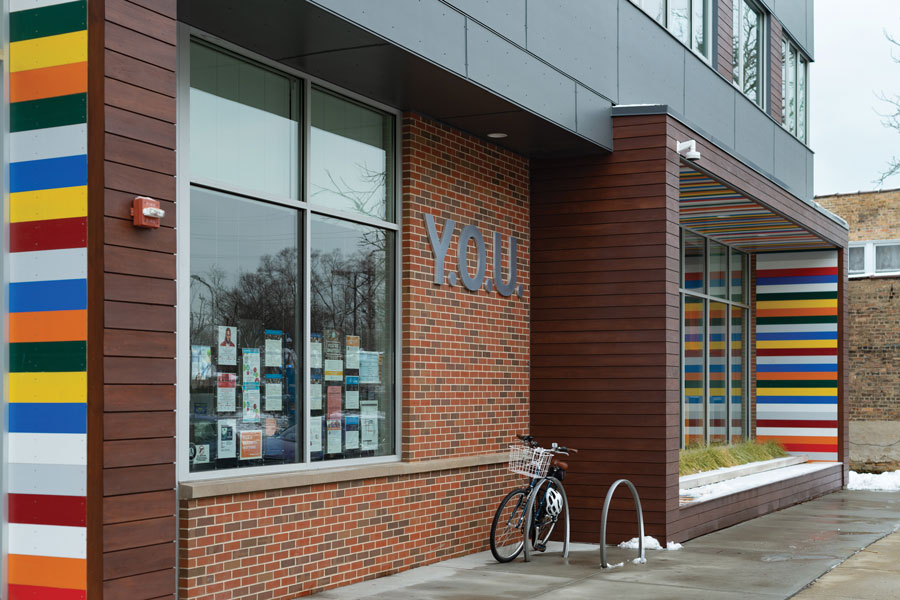 The Youth & Opportunity United building. Y.O.U works with youth from third to 12th grade to close the opportunity gap by stressing academic, social and emotional learning.

Simone Hampton was first exposed to Youth & Opportunity United in middle school, when it was just a drop-in center at the church across the street.

Many of her peers at Chute Middle School went through Y.O.U. programming, as did her younger sister years later. By the time Hampton graduated from college, she knew she wanted to work closely with children and teenagers.

“It’s really this after-school space that allows youth to kind of explore their identity, their interests, with safe and caring adults,” Hampton said. “I kind of took a stab at it. I was just really excited to be able to take my passions and interests and fuse them into the program’s structure.”

Hampton became involved with Y.O.U. nine years ago and has been the after-school program director of its Dawes Elementary School center for the past four years.

Y.O.U. was founded in 1971 as a drop-in center at Nichols Middle School, and the organization has since expanded into 11 different schools throughout Evanston, Skokie and Morton Grove. Y.O.U. operates offices within each of the schools, except for Evanston Township High School, which is serviced by the organization’s center located across the street.

Y.O.U. serves more than 1,600 students from third through 12th grade, striving to close the opportunity gap — the disparity in access to resources needed to have post-secondary and life success — and prepare them for post-secondary success. Its board president, Cindy Wilson, said it emphasizes social, emotional and academic growth to help them succeed regardless of factors like race, income and sexual orientation.

“Evanston schools have this wonderful mix of different ages and ethnicities and race, but also, there’s a big issue,” Wilson said. “There’s a lot of white privilege that happens in Evanston. There’s a lot of really big income swings in Evanston. It’s nice to see an organization that is trying to tackle and make sure that every child in Evanston gets equal opportunity in success and life experience.”

Each Y.O.U. site has its own staff consisting of a program manager, clinicians, AmeriCorps workers, part-time staff and volunteers who conduct age-specific programming to enhance youth education.

“Eighty percent of the kids’ time is spent out of school, so that time is really important,” she said.

At Dawes Elementary School, Hampton and her programming team incorporate social and emotional learning into the students’ lives through Pixar movies.

After watching 10 minutes of a Pixar movie, students complete a follow-up activity analyzing themes, such as facing adversity or being different from others, that correspond with important social and emotional skills.

“That’s kind of one component of our social-emotional learning that we try to integrate into the youth to make it fun for them, but then still relevant to the work we’re trying to do with them,” Hampton said.

Blinn DiNovi said this programming builds confidence and resilience in youth while changing the trajectory of their post-secondary lives.

Y.O.U. works closely with parents of the students, giving them a better understanding of the participants’ backgrounds, Blinn DiNovi said.

“Without the parental buy-in, you can’t get anywhere,” she said. “We’re very transparent with parents about what might have happened in program today. Having a strong relationship with the parents just helps us do our work better.”

Support from community groups also helps enrich the program’s curriculum. Partners include Northwestern University’s Block Museum of Art, EvanSTEM — which seeks to improve STEM access to Evanston students who have previously underperformed or been underrepresented in STEM programs — and The Talking Farm, which teaches sustainability and urban farming.

“The plethora of opportunities that we’re able to offer is really unique, so youth can be a part of Y.O.U. but they can engage in STEM programming,” Orleans said. “They can engage in an artists-in-residence program. They can do all of that within the same week or throughout the entire course of the year.”

These opportunities continue into the summer, when partnerships are central to Y.O.U.’s summer program as well, Blinn DiNovi said. The summer consists of eight weeks of programming to help reduce summer learning loss while also offering engaging and fun enrichment opportunities, she said.

Each year, high school students in Y.O.U. choose a theme connecting Martin Luther King, Jr.’s legacy to their own students’ lives. The 2019 theme is “Because of them, I can.”

“It’s youths tapping into historical figures, people that have meant a lot in their lives, people they look up to as role models,” she said. “We really want to make sure that we’re connecting meaning with action for youth. It’s also a call for action to the community.”

Events like this, coupled with regular programming, help youth build confidence in who they are as they explore their identities, Hampton said.

“Just seeing the kids matriculate through my program and go through other Y.O.U. programs, hearing and seeing the impact that I had and that the program had in their lives, is really powerful,” Hampton said.