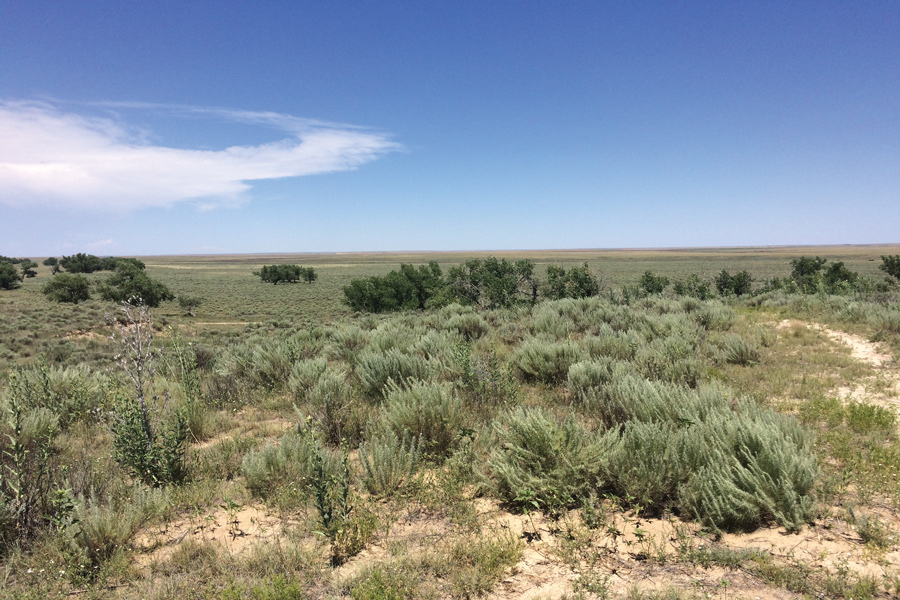 Karen Little Coyote returns every year to Sand Creek, the place where her ancestors were massacred over 150 years ago. She finds only sagebrush, sand and heavy silence as she walks down to the waterless creekbed, imagining the bloodshed that occured in such a quiet corner of the world.

“(A woman) was laying on the ground, and she was telling the people, ‘go on, go on,’ and she was holding up her hands,’” Little Coyote said after an annual on-campus commemoration earlier this month, recalling stories passed down to her. “She said, ‘don’t forget us. Don’t forget us.’”

On November 29, 1864, the 1st and 3rd Colorado Regiment, commanded by Colonel John Chivington, attacked the peaceful Native American village of the Cheyenne and Arapaho at Sand Creek. Under the tribe’s white flag, the soldiers slaughtered over 200 men, women and children and mutilated their bodies.

John Evans, a founder of Northwestern, Evanston and the University of Denver, was the territorial governor of Colorado and the state superintendent of Indian affairs at the time of the massacre.

One hundred and fifty four years later, students, administrators and faculty at Northwestern continue to grapple with the impact of the massacre and the role Evans played in it.

A pair of 2014 reports commissioned by NU and the University of Denver ended with conflicting conclusions but found that Evans fostered an environment that made the massacre possible and refused to acknowledge it ever took place. While Northwestern hasn’t taken the stance of DU’s report that Evans was “deeply culpable” for the massacre, it has launched a broader effort to strengthen its relationship with Native American communities, even acknowledging for the first time at commencement this year that it sits on indigenous land.

At the commemoration event, Gurneau highlighted the creation of a new documentary from Northwestern that premiered. She said the film “added color to the story.” According to Little Coyote, it turned out “really good.”

Finally, this past weekend, three Northwestern students travelled to Colorado to see the massacre site and participate in the 20th annual Sand Creek Massacre Spiritual Healing Run/Walk. Gurneau said this was the third year the University has sent students to the run.

In 2012, students and faculty began to raise questions about Evans and his role in the massacre. Students asked the University to remove Evans’ name from all University buildings and started an information campaign to spread awareness about NU’s ties to the incident. Administrators formed committees to investigate Evans’ role and make recommendations to reconcile this past.

Makasha Copeland, a NAISA member and Communication junior, said many commemorative efforts at NU, including the John Evans Study Committee that released the report in 2014 and the annual commemoration, were “directly because of student activism.”

She emphasized how grateful and honored she is to carry on the work of “NAISA past, present and future.”

Though knowledge about the massacre has improved since she started at NU three years ago, Copeland thinks her classmates still don’t know much about the Sand Creek Massacre. Students need to seek out information, but they often don’t know where to start, she said.

“It’s important that Northwestern staff, students, alumni and professors come to (the commemoration), so they can hear about how the massacre affected and affects us today and how we all benefit from John Evans’ legacy and how can we move forward that history in a way that is beneficial to the Cheyenne and Arapaho nations,” Copeland said. “One of the most important things that NAISA can do on campus is to spread this awareness.”

But beyond NAISA, Copeland would like to see the University encourage all students to reconcile with Sand Creek and John Evans through a mandatory course or programming during Wildcat Welcome.

Ari Kelman — a history professor at the University of California, Davis and author of A Misplaced Massacre: Struggling Over the Memory of Sand Creek — said people in Colorado and at the University of Denver have a more “immediate, day-to-day connection with Sand Creek.” Even though Northwestern is 1,000 miles away from the site of the massacre, he said students must realize they all live and learn on indigenous land.

“It’s useful to understand what happened at Sand Creek as part of a much larger, longer story of violent dispossession of native peoples in the United States,” Kelman said. “Sand Creek is one among many examples — a particularly horrifying, ugly example — of a process of dispossession and land-theft that is a critical part of United States history.”

In the process of creating relationships with the Cheyenne and the Arapaho through the documentary, Gurneau said the University has taken “extra steps” to make sure they approve of the final version. She said she and associate provost and chief diversity officer Jabbar Bennett visited the annual consultation at the Sand Creek Massacre National Historic Site to present the documentary.

The four tribes affected by Sand Creek — the Southern Cheyenne, Northern Cheyenne, Southern Arapaho and Northern Arapaho — are all sovereign nations with their own legal systems, Gurneau said. All four have official representatives of Sand Creek Massacre descendants, and the University welcomed them like any important governmental guest, Gurneau said.

Gurneau added that they have different connections with tribal representatives in the Great Lakes region, including an economic relationship. At the opening of the newly-renovated Welsh-Ryan Arena this fall, University officials honored leaders from the Menominee Nation, whose lumber was used to build the basketball court.

“Tribal nations are very diverse — diverse peoples with different languages, cultural practices and even the political legal structures,” Gurneau said. “Learning specifically about the four tribes within the Cheyenne and Arapaho and how they approach healing from this massacre…(has) been a learning experience for me, spending time and listening. I feel so honored that despite our history with our founder, these folks have been willing to come and share to educate us about what happened and how we can learn from it.”

Kelman said University of Denver and NU as institutions try to reconcile themselves with the actions of John Evans, but tribes themselves have not experienced reconciliation with the government. In particular, he highlighted the 1865 Treaty of Little Arkansas which promised land and reparations in the aftermath of the Sand Creek Massacre — promises the federal government never delivered.

“I think (the tribes are) very concerned about making sure that future generations will understand what happened at Sand Creek,” Kelman said. “I think they’re very concerned that people should understand that they’re still alive, that despite what happened at Sand Creek, they’ve persisted, that they’re still national entities, that they still have intact traditions, and that they’ve maintained their sovereignty.”

For Little Coyote, reconciling with Sand Creek means taking time every year to tell the story of her ancestors, participating in the healing run/walk and reminding her family that they must be proud of who they are and where they came from.

Little Coyote tells her family that her great, great-grandfather Black Kettle was a peace chief. He put up a white flag of surrender, but American troops attacked him and his people anyway. He survived but was killed almost exactly four years later by US soldiers at the Washita Massacre.

“I’m grateful to be his descendant and to be able to tell what happened to our people,” Little Coyote said. “If it wasn’t for our ancestors, we wouldn’t be here today. I’m thankful to the people who invite us to talk about our ancestors, that they want to find out more history and let more people know so they’re not forgotten.”