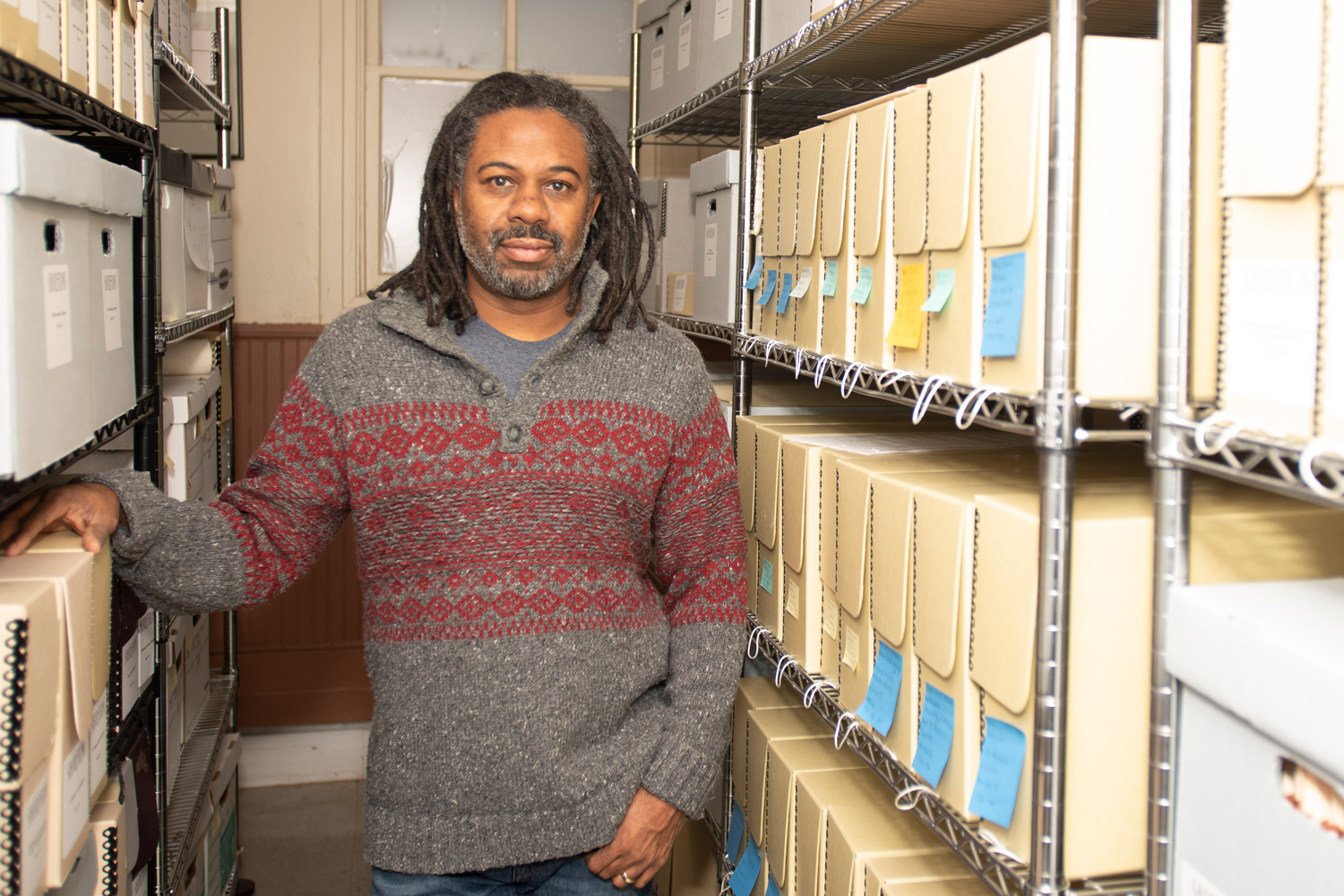 Shorefront founder Dino Robinson stands among archives. The city will honorarily name a portion of Church St. after Robinson for his work preserving Black history in the North Shore. (Colin Boyle/Daily Senior Staffer)

Shorefront founder Dino Robinson stands among archives. The city will honorarily name a portion of Church St. after Robinson for his work preserving Black history in the North Shore.

Evanston Organizes: Evanston’s black community lacked recognition for decades. Shorefront Legacy Center aims to give it to them.

“I thought, ‘Yeah, we can do this a little better here,’” said Robinson, shaking his head and laughing incredulously at the memory. “So I started doing my own kind of just asking queries. Asking questions.”

At first, Evanston’s older black community was wary of Robinson, who — though black himself — was then a “newcomer.” Robinson understood. But the more he spoke with people, the more stories he uncovered and the more names he learned, the more others treated him as if he’d grown up with them.

In 2002, Robinson and a team of other locals established Shorefront Legacy Center: the North Shore’s only community archives for black history.

First quartered in Robinson’s home, then in the former Foster School building, the nonprofit center now operates from the basement of Sherman United Methodist Church, 2214 Ridge Ave. The room would be spacious were it not filled with bookshelves and tables, each piled high with volumes of records, photographs and other items.

The collections have gone from three file folders labeled “Color” to more than 250 linear feet of archival material.Still, even with all the work the staff puts in, some community members said Shorefront does not get the respect it deserves city-wide.

Yes, the center has recently gained more name recognition: It was involved in the fight for landmark status for the Foster School building and produced the documentary on late ex-mayor Lorraine Morton. But former 5th Ward alderman Delores Holmes said at the very least, Evanston schools should make trips to Shorefront part of the required curriculum.

“Good things happened in this community with African American people, and their contributions helped make Evanston what it is,” she said. “You don’t hear that a lot, but it’s there and people need to know that.”

Collect. Preserve. Educate. Those are the tenets of Shorefront’s mission statement.

Robinson said the mission is realized almost every day. Not one person, even people who have lived in Evanston for decades, leaves the center without saying, “Dino, I can’t believe I didn’t know” this or that.

Holmes has lived in Evanston for roughly 80 years. She grew up in the 5th Ward — a ward that has for generations had a thriving black community, and a ward she represented on City Council.

“Before, you only sort of had that history passed along orally through family and community people,” Holmes said. “That kind of history was passed through the church and through the Foster School. It wasn’t at all taught widely.”

Ald. Robin Rue Simmons (5th) said Robinson is her partner in preserving black history — a key campaign promise of hers in her bid for office.

“I’ve always called Dino first when I had a question about how did we get here, or where should we be going making sure great history is honored and unfortunate history doesn’t repeat itself,” she said.

The nonprofit center has published and printed journals that share old anecdotes, from blurbs on great jazz musicians to blurbs on social clubs for women and children. It has also unearthed new accounts, including that of the McGaw YMCA at 1000 Grove St.

Much of the early dialogue around the YMCA’s history was how two wealthy, white philanthropists saw the need to service the black community “and blah blah blah,” Robinson said. But with the help of the YMCA staff, Robinson got his hands on the organization’s minutes and — using that and other research — pieced together a different narrative.

Rev. James Talley came to Evanston in 1907 and was barred from the YMCA because of his race. So, he started his own programming, which embarrassed the YMCA and led the branch to hire Talley to build a separate, segregated facility for the black community.

By the 1940s, the national organization began pushing for integration. Years later, after observing other branches, the Evanston location combined its facilities. But until recently, much of the local black community had not felt welcome in the McGaw YMCA, Robinson said.

Beginning in 2006 and to improve relations, Robinson said YMCA staff renamed the recreation room after Talley, put out a public apology, created a grant program and asked Shorefront to help educate board members about the branch’s history.

Nabors, a pastor at Second Baptist Church, moved to Evanston in 2015. Because of his previous leadership experience with the NAACP, he was installed as the Evanston/North Shore chapter’s president two years later. He said he gave Shorefront a current copy of his CV and contributed to a project documenting the past 10 years of NAACP presidents and board members.

“I can tell great stories and include it in a sermon, but Dino and Shorefront are the ones with the details,” he said. “It’s not as utilized as much as it should be.”

For example, “we celebrate Frances Willard, but not many people know Ida B. Wells — who lived in Chicago — regularly visited Evanston,” Nabors added. “And the two were contemporaries, but they rarely crossed paths because, well, Frances was … a little prejudiced.”

With just a $30,000 budget each year, the center’s board is strapped a little tight.

Thanks to consistent private donations, some grant money and the Sherman Methodist United Church’s affordable rental rate, Shorefront is able to keep its doors open — not 24/7 like board members would like, but at least on Saturdays from 9 a.m. to 2 p.m. and on weekdays by appointment.

Shorefront is also looking to build an endowment, Robinson said.

“If we had 0.01 percent of what Northwestern had, I think we’d be riding high,” he joked.

Northwestern recently contributed to the Lorraine Morton documentary Shorefront produced, and the center has worked with other universities: The Black Metropolis Research Consortium — an association of archival organizations based at the University of Chicago — adopted Shorefront as a member, Harvard University digitized some of Shorefront’s archives and Dominican University sends over interns.

Would Shorefront like to see more interest, partnerships and money from the City of Evanston or Northwestern? Absolutely, Robinson said. But not at the cost of the center’s independence.

Often, when big institutions attempt to partner with community-based organizations, the relationship isn’t equitable and the archives — which end up being stored in the big institution — become less accessible to the public, Robinson said.

“It’s usually the community entity that has to follow the rules of the bigger one,” he said. “And let’s say Northwestern wants to host our archives in their library. People will have to navigate to get on campus, obtain a parking permit and park blocks away … and God forbid that you come on exam day.”

Andrea Jackson, the Black Metropolis Research Consortium’s executive director, said Shorefront is one of just three member-archival organizations that are community or faith-based — the rest are associated with large institutions.

Even more unique, she added, is that Shorefront is also one of very few archival organizations based in a suburban area.

“There are lots of places where, instead of developing a whole archive for the suburban area, they end up putting archives into the larger city archives,” she said. “Evanston and North Shore communities are closely related to Chicago, but they do feel empowered to say, ‘This is who we are, and we’ve developed our own way of living.’”

But running Shorefront at a community-level does mean sacrificing big money as well as losing grants that prefer institutional archives.

Robinson said Shorefront’s nontraditional board — which has 24 members at three different levels — is made up of an amalgam of teachers, government officials, bankers, designers and others who have unique skill sets. None of them have archival degrees, but they learned from hands-on practice.

“We know what we’re doing, but the way the grants are structured … you have all these barriers. You have to have a Ph.D in local history. No one has a Ph.D in local history here in Evanston or in the black community,” Robinson said. “Those are barriers that are fabricated to prevent people from controlling their own narrative.”

Still, locals prefer this model, and Robinson believes Shorefront’s design could serve as a framework for other communities in Evanston looking to create their own archival organizations.

He and other board members are preoccupied with all the work that’s left for Shorefront itself. There are two entire collections that need to be digitized, which takes a lot of bandwidth and money. And there are still hundreds of videos, photos and other archival material to process.

Shorefront is also trying to expand its reach. Over the last two years the center has been offering tours to incoming Northwestern freshmen. Robinson has visited campus and classes for speaking engagements.

Ideally, the center will transition from being tucked away in a church basement to having its own building in the 5th Ward, Rue Simmons said. Both she and Holmes had initially hoped to anchor Shorefront in the Gibbs-Morrison Cultural Center, but due to funding issues and the programming and operational changes, the idea fell through.

As for Robinson, he has a specific building idea in mind: something roughly twice the size of the church’s basement and made of steel, concrete and glass — complete with solar panels, LED lighting, a nice garden or sculpture and a thermal heating and cooling system.

“This is everybody’s history,” he said, glancing around at vast archival materials surrounding him. “I make a point to say that, too. We’re not a subset of American History. We are American history.”