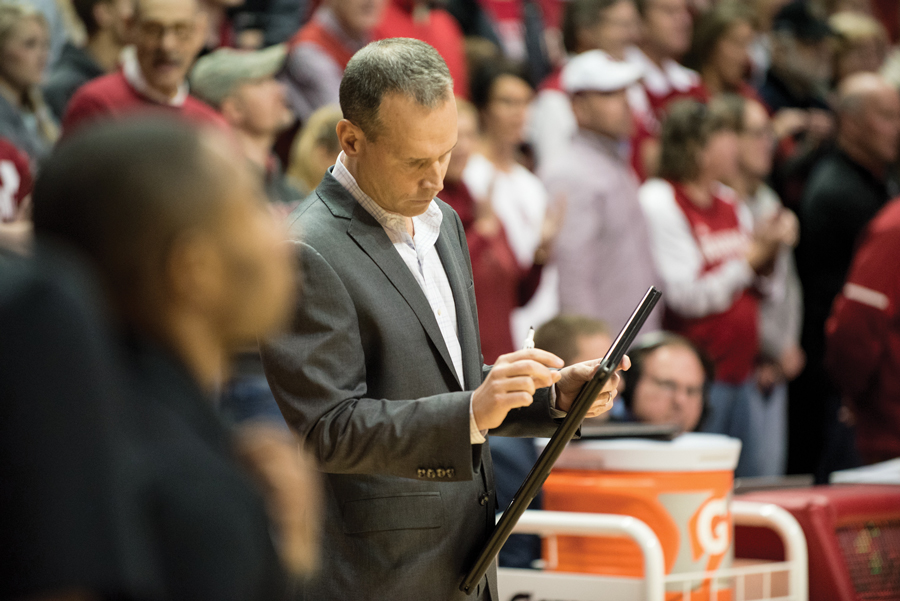 Chris Collins draws up a play. The sixth year coach was heavily influenced by Tex Winter when he was around the Bulls in the 80s. (Daily File Photo by Colin Boyle)

Chris Collins draws up a play. The sixth year coach was heavily influenced by Tex Winter when he was around the Bulls in the 80s.

Chris Collins has sat in thousands of coaches meetings in his career, but after thirty years, he can still vividly remember that assistant who seemingly knew everything about the game.

Time after time, Collins learned from Tex Winter, who led five college programs including Northwestern before transitioning to the professional game and working for the Bulls with Chris’ father, Doug.

The inventor of the triangle offense and Collins — the eager son of the head coach — formed an unlikely bond around the Bulls in the 80s.

“I was very attentive at practices, I would watch the coaches coach,” Collins said. “I would sit in staff meetings with the guys as a kid and I would listen to (Winter). We knew right away, whether you agreed or disagreed with the way he felt the game should be played, he had a great knowledge of it.”

After the Bulls fired Doug in 1989, Winter remained on the staff, and his impact as an offensive tactician was often overshadowed by the starpower of Jordan, Scottie Pippen and new head coach Phil Jackson. He worked under Jackson again with the Lakers in the early 2000s, where he reimagined his triangle offense to better fit Kobe Bryant and Shaquille O’Neal.

Winter, who retired from coaching in 2004, died on Oct. 10 at 96 years old. In his career, he connected with dozens of the greatest NBA players and hundreds of coaches across the country who run systems similar to the one he created.

“He’s a guy that some of the greatest coaches that have ever coached this game went to for advice,” Illinois coach Brad Underwood told The Daily. “He saw a system that won at the highest levels, yet he was a guy that was great being in the background… He had as much respect as anyone in the game of basketball.”

Collins does not remember Winter mentioning the challenges he faced when he coached the Wildcats from 1973 to 1978, but he’s uncertain if Winter was able to reach his full potential in the Big Ten.

That’s the biggest difference between him and this mentor.

Throughout Winter’s career, according to Collins, he was motivated to see basketball played at its highest form. That’s why he was satisfied seeing Jordan, Bryant and Jackson receive most of the credit for two of the greatest dynasties in NBA history.

“It’s cool when a coach like (Winter), with everything he meant to the game, he can be a part of those championship teams,” Collins said. “But the guys along the way were just as important.”

On the other hand, Collins is solely focused on NU. He’s about to begin his sixth year as head coach, and following the Cats’ 2017 NCAA Tournament run with a losing season, he’s been reminding himself that he came here to build a winning culture — something Winter was unable to accomplish.

“I know that I’m not at all the coach I was five years ago,” Collins said. “We started this thing from the ground level, and it’s been fun trying to build it when it’s not always good times. For me, personally, what you hang your hat on most are the relationships you build and the development.”

When he took the job in 2013, Collins said he understood it would be a process taking NU where he wants it to go, and the young Cats went 14-19 in his first regular season before losing to Michigan State in the second round of the Big Ten Tournament.

Now — for the first time in his head coaching career — Collins is anticipating having success without a veteran point guard or much experience at three of the five starting positions.

For the first time since Bryant McIntosh, Scottie Lindsey and Vic Law came to campus as freshmen, Collins has three high-caliber recruits believing they’ll see the floor immediately. This time around, the underclassman are expecting to win right away.

But none of this is as important as the growth Collins hopes to see from himself; he calls himself his “toughest critic.” Collins has already proven that he can lead NU to the NCAA Tournament, and he’s already shown he can recruit top-100 players, but now he has to reach an even higher standard.

It’s a lot of pressure for a 44-year-old, a 180-degree turn from those Bulls’ coaches meetings in the ’80s where his only responsibility was to listen to some of the smartest minds in the game.

“The main thing that great coaches that I’ve been around have taught me about as I’ve been young is that you never have all the answers,” he said. “Even though you can emulate (Mike Krzyzewski), or my dad or a Tex Winter, I’m different than those guys. I have to put my own personality and my own spin on things I’ve learned from them and kind of put my own coaching style.”

“When (Collins) did my in-home visit, from the first time he came and watched me play he came and talked to me for a little bit and I just trusted him,” freshman forward Pete Nance said. “Right away, I just knew there was something between us.”

In June 2017, three months after Collins wrapped up the best season in program history, he received the commitment from Nance, the highest-ranked recruit the school had ever signed. Nance said in January he watched every game of the stretch that season with his father and talked about what the program could become in the future.

Collins has had one focus over the past six years: building a quality program that has enough success to attract top-100 talents like Nance and freshman forward Miller Kopp. If Collins ever accomplishes his ultimate goal — getting Northwestern to the Final Four — he has “absolutely no idea” what his motivations will be after that.

“You don’t know what life’s going to throw at you,” Collins said. “I’m not sure as I get older what that’s going to mean for my career. All I can say is I’d be hard-pressed to think of my life without basketball because it’s been such an important part of me ever since I was a kid… There’s so much unfinished work here that I’m focused on before I know what I’m going to want in the future.”

Of the 14 head coaches in the Big Ten, Collins, Greg Gard and Tom Izzo were the only without any previous head coaching experience when they were hired. But Gard and Izzo were assistants at Wisconsin and Michigan State respectively for over a decade before being promoted all the way to the top.

Since he’s still young, Collins is figuring out what kind of coach he wants to be in the long run. Though he has “no idea” what area of the game he’ll be able to impact most from the sidelines, he hopes he’ll continue to improve as a tactician and a motivator down the line.

Six years in, Collins still believes Northwestern can become one of the best basketball programs in the Big Ten. And he hopes he can do that while impacting the game like the mentors he’s had along the way.