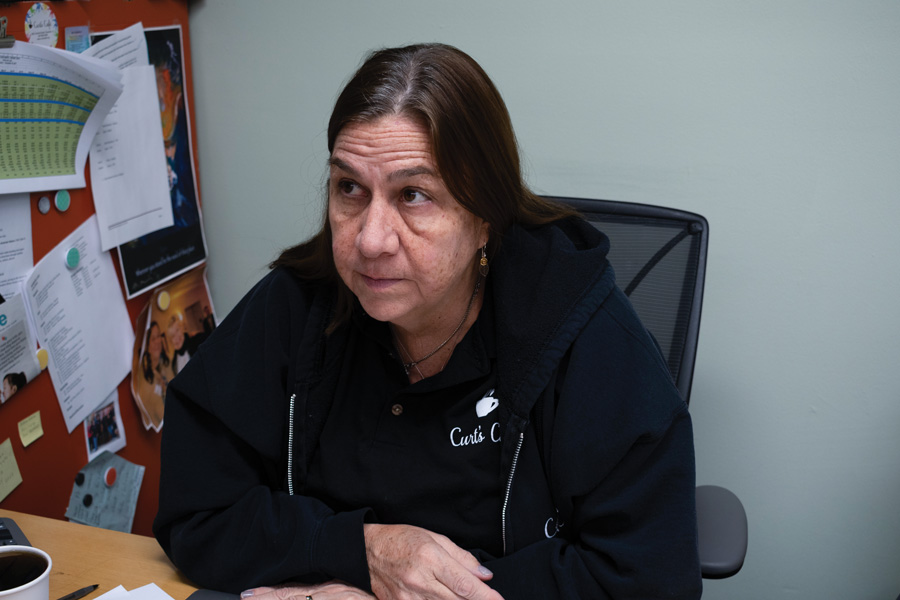 Susan Trieschmann in her office. Since founding Curt’s Cafe in 2012, she reflected on her success and challenges. (Alison Albelda/Daily Senior Staffer)

Susan Trieschmann in her office. Since founding Curt’s Cafe in 2012, she reflected on her success and challenges.

Evanston Organizes: Curt’s Café reflects on success and growth as a staple of the community

Susan Trieschmann always welcomes her graduated students to Curt’s Café to share food at “the kitchen table” — for some of her kids, the community there is the first family they have.

“We have thanksgiving dinner with all past students, current students and family,” Trieschmann said. “It’s a beautiful opportunity.”

Trieschmann said she started Curt’s Café because she was horrified by the high rates of incarceration and recidivism in the justice system. A study of recidivism rates in 30 states by the Bureau of Justice Statistics revealed that within nine years of release, 83 percent of previous offenders were rearrested. At Curt’s, only three students out of almost 300 have gone back to jail — and two of them are currently employed with help from the organization — Trieschmann said.

“We’re just all the same in the core parts of our heart,” she said. “And we’re all trying really, really hard. I would say that to my students as well. Don’t judge.”

Trieschmann has been working in hospitality since she was 13 years old. At 25, she founded the catering company Food for Thought with her sister Nance and brother-in-law Curt.

Curt passed away from lung cancer at age 53, and Trieschmann said she turned his name into an acronym — Cultivating Unique Restaurant Training. It’s now the name of her business, and honors his courage and respectfulness, qualities she seeks in her students.

In a 2016 video on the Curt’s Café website, ‘Craig’ — a graduate of the program whose name has been changed for safety — said he can’t go back to where he grew up among gangs and domestic violence. He said he battled homelessness and addiction before coming to Curt’s.

“Society puts an ‘X’ on youth at a young age and pretty much just knock them out of the race of life,” Craig said. “(At Curt’s), they say there is no ‘X’. You come here, we help you, you help us. In the end, you’re going to be prepared.”

Trieschmann said Craig currently works in sales in Chicago and hopes to go back to school to study social work. He currently mentors other Curt’s students.

Trieschmann said the program at Curt’s centers around workforce training, from learning how to make a latte to anger management. She said there are full-time social services providers at both locations.

Curt’s Café selects students who are highest at risk and employs them in a three month program, Trieschmann said. After they graduate, Curt’s continues to support them as they find work and adjust to their new independence, she added.

Trieschmann said on paper, her program’s success is measured by where her students are now. But she shies away from this simple definition, saying none of her students could fail her and she is always there to help them.

“To have them come over here and give one more white woman a chance to stand with them, I think that’s pretty damn good … to hear their stories, to help them them to walk through their stories,” Trieschmann said. “Even if they royally screw up, I still don’t see them as failures.”

Curt’s Café Board president Rick Marsh got involved with Curt’s as a mentor four years ago. He acknowledged Trieschmann’s success and saw how he could contribute his skills and expertise as a longtime mentor to young African American men. He said he loves the Curt’s model and serves as an “uncle” for his students.

‘A hybrid of a nonprofit’

Marsh described Curt’s Café as a “hybrid of a nonprofit,” relying heavily on grants and donations but also raising funds through the cafe. Marsh, who worked for over 30 years at DuPont, a company that develops polymers, said his corporate background has helped him codify the Curt’s program for expansion.

“(We’re developing) some strategic planning around what does a new venture look like,” Marsh said. “What’s the criteria? What does it need to be in another location in a different city?”

Curt’s Café is currently in the process of expanding to Highland Park. Trieschmann said they are looking for a match grant to fund the expansion and will soon start looking for a space.

Trieschmann said the greatest challenge she faces in her work is constantly having to fundraise. With her background in restaurants and “shy” disposition, she said she struggles with the fundraising aspects of nonprofit work.

“Maybe we’d be a different organization if I was more of a social advocate,” Trieschmann said. “I lead from behind.”

Curt’s Café gets 46 percent of its funds from its two Evanston locations, Trieschmann said. She added the Evanston community provides a huge support system for the business, but emphasized that she would love to see more customers from Northwestern — whether that be students visiting or NU events using their catering.

When Marsh thinks back on his time at Curt’s so far, he said he remembers one student who came in “with a real serious edge.” When the student was able to come in to the cafe, he changed and grew, learning to let his guard down.

“(He was) Mr. Tough Guy coming in, and he cried like a baby when he graduated,” Marsh said.

“Now I’m getting choked up.”