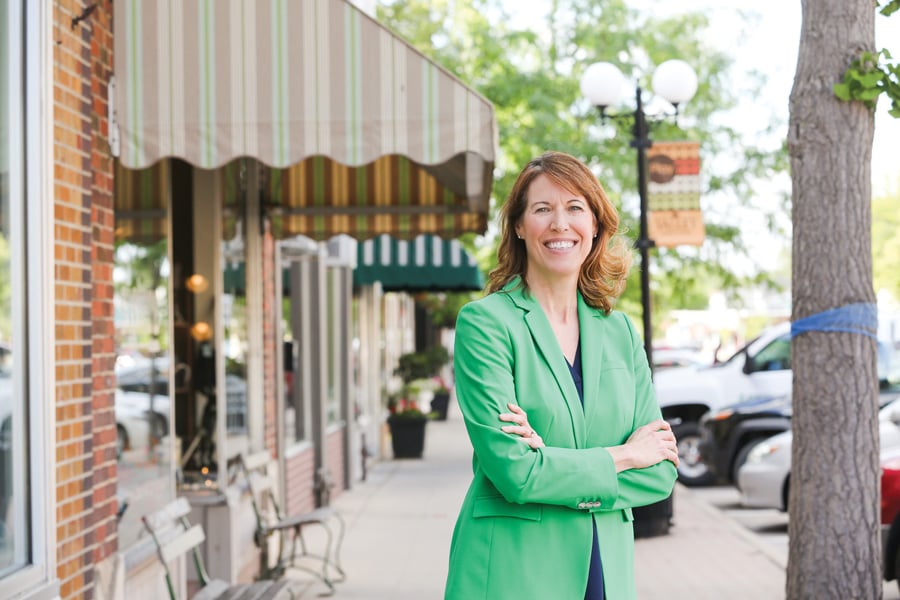 On November 9, 2016, Cindy Axne (Kellogg ‘02), afflicted by pneumonia and concern for the country, stepped out of her West Des Moines, Iowa house to go for a walk.

She started by attending local Democratic Party meetings and talking with other motivated Iowans who were considering running for office. Invigorated by helping with members’ potential campaigns, Axne recalled a lesson she had learned at Northwestern’s Kellogg School of Management: if an opportunity compels you, take it.

In 2017, she made the decision to run as a Democrat for Congress in Iowa’s 3rd district, challenging U.S. Rep. David Young (R-Iowa).

A foundation in education

Axne, a fifth-generation Iowan, worked for the Iowa state government from 2005 to 2014, overseeing strategy and implementing organizational initiatives for three departments over three administrations before leaving to own and develop a digital design company.

Though Axne was not very politically engaged while at Kellogg — she worked full-time and was pregnant with her first child — she was introduced to Iowa community activism when her child started school. Upon finding out that eligibility for full-day kindergarten was determined via lottery, she put together reports on the inequity of that system and presented it to the school board.

“It took about eight months trying to get that pushed through, but in the end, I’ve got pretty sharp elbows when it comes to doing what’s right,” Axne said.

Since that moment, education became a top priority for Axne. She said she believes public school should be “the great equalizer.” To that end, she said she will advocate for increased Pell Grants, a reinvigorated student loan forgiveness program, lowering student loan interest rates to 2 percent or below and ensuring everyone has an opportunity for post-secondary education — between trade schools, apprenticeship programs, two-year colleges or four-year colleges.

Who run the world?

Samuel Maude, a Medill junior from Clive, Iowa, said though economic concerns are important to him, he mostly votes based on social issues.

Axne is a member of what some have deemed ‘The Year of the Woman.’ 2018 has seen record numbers of female candidates and female primary winners; if Axne were to win, she would be the first female Iowa has ever sent to the House of Representatives.

Growth in female political ambition was only a matter of time, Axne said. Women, she said, have historically been the ones advocating in and for their communities. This year, with so many women possessing smart policy ideas, collaborative approaches, an ability to achieve results and a desire to improve others’ lives, they decided to step up and run.

She said women have not seen their interests represented in Congress, and support of her campaign is a signal that qualified women are wanted everywhere — from politics to C-Suites.

“Women, notoriously, are the ones that really stand up for communities,” Axne said. “I think that I’m going to be able to be that for the people here in Iowa and be very proud to represent it, and hopefully be a good role model for our girls in this district as well.”

Another potential trend Axne could join is the expected Democratic ‘blue wave’. For her party to take back the House, Axne said her race is a “must-win.”

Iowa’s third district can be considered a bellwether for the country in many respects — the district voted for President Obama in 2012 but President Trump in 2016, and the state has long been considered a gauge of the nation’s political leanings.

FiveThirtyEight currently classifies the district as a toss-up in some forecasts and a “lean Democrat” district in others. The site gives Axne a nearly 60 percent chance of winning, and expects her to receive 48.8 percent of the vote share. Young, a two-term incumbent, won in 2016 by 13.7 percentage points.

Axne said Iowans in her district are looking for a champion who will defend their agricultural sector, health care and job opportunities — something she believes she can be, and something they mistakenly saw in Trump.

“When Iowans are presented with choices, and they really study them, they can make a really good decision,” Axne said. “Iowans were trying to see a change, I believe, in this last election. They were hoping that, by voting for Trump, that that would happen. It didn’t. It’s unfortunately hurting Iowa.”

Republicans are clearly worried about Axne’s chances of flipping the district — Vice President Mike Pence and Speaker of the House Paul Ryan have both gone to Iowa to campaign for her opponent this month.

‘I love the fact that she’s out there’

In Iowa, Axne said she was raised to believe that helping strangers — not just neighbors and friends — makes communities strong. At Kellogg, she learned the value of collaboration and bringing those from different backgrounds and skill sets together. And as a representative, she hopes to fuse those lessons and ensure Iowans have a voice in Washington.

Nishea Clark (Kellogg ‘02), a business school classmate of Axne’s, said she was impressed by her willingness to step up and advocate for those principles. Remembering Axne as someone who was outgoing, intelligent and passionate, Clark donated to the campaign after a call from her old friend.

“I love the fact that she’s out there and that she’s doing so well,” Clark said. “I really hope that she gets elected. Too bad you can’t vote in other states!”