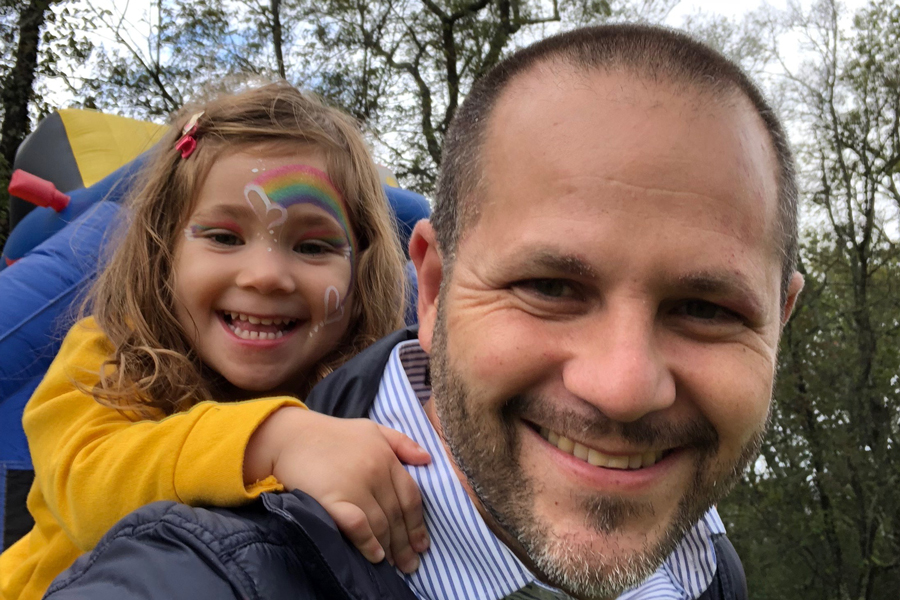 Justin Kanew (Weinberg ’01) carries his daughter. Kanew, who is running for Congress, said he hopes to advocate for young people like her through supporting climate change and gun control legislation. ((Source: Justin Kanew))

Justin Kanew (Weinberg ’01) carries his daughter. Kanew, who is running for Congress, said he hopes to advocate for young people like her through supporting climate change and gun control legislation.

Justin Kanew (Weinberg ’01) never set out to run for Congress.

Kanew, 39, has been many things — history major, writer, producer and contestant on “The Amazing Race” are among the multi-hyphenate’s many titles — but he had never considered politics. After the 2016 election, Kanew, who lives in College Grove, Tenn., decided he needed to step up and act to keep the country on the right path. He sought out the Democratic challenger running against longtime incumbent U.S. Rep. Marsha Blackburn (R-Tenn.) hoping to offer his help.

“I went looking for whoever was going to run against her,” Kanew said. “I couldn’t find that person, so I became that person. It’s really not much more complicated than that. So, this was not something that I set out to do, but with everything going on in this country, it feels like we’re better off when we have options. So, I’m just the guy that stepped forward.”

Now just weeks away from the 2018 midterm election, Kanew has been campaigning for over a year as a Democrat to represent Tennessee’s 7th district, a longtime conservative stronghold that stretches from the wealthy suburbs of Nashville to the rural counties east of Memphis. Blackburn vacated her seat to run for Senate in October 2017, so Kanew, having won his primary, is now facing Republican State Sen. Mark Green.

Though Kanew had never considered running before, politics was always a topic of conversation among his friends in college.

Justin Wine (Weinberg ’01), Kanew’s fraternity brother in Delta Tau Delta and longtime friend, said Kanew and other liberal friends would always argue with the conservative members of the friend group. Both Wine and Kanew recall the 2000 presidential election between George W. Bush and Al Gore as being a particularly volatile time — Kanew was so engrossed by the recount that he turned in an essay on his fascination with the vote rather than writing it on the preassigned topic.

Wine said he had never envisioned Kanew running for Congress, but he was not surprised when his old friend announced his candidacy. During the 2016 campaign, Wine said Kanew became increasingly vocal about his frustrations, even starting a podcast called “Get It. Got It. Good.” where he discussed current events.

“It seemed like an obvious reaction for somebody like Justin to decide to throw his hat in the ring,” Wine said.

Kanew — who often says the “D” next to his name “stands for decency more than anything else” — emphasizes civility and accountability in his campaign. He said he sees himself as a bridge-builder who stands with constituents against special interest groups, rather than a partisan drawing lines between the parties. To that end, he has refused to take any special interest or political action committee money.

Mark Green, Kanew’s opponent, is running on a platform of security, stability and safety through small government. Kanew said Green is “even too extreme” for the Trump administration, citing Green’s withdrawal of his nomination to be Secretary of the Army after inciting controversy through anti-Muslim and anti-LGBTQ statements.

Kanew, who has a 2-year old daughter, said his platform is beneficial to younger constituents such as college students. Climate change, gun safety legislation, access to health care and raising the minimum wage are all issues he hopes to work on in Congress.

He also said advocating for diversity and inclusion is foundational to his worldview — something he learned at Northwestern.

Kanew knows he is facing an uphill battle, but said he is “cautiously optimistic.” His campaign has raised $440,000 in grassroots donations — more than the past seven Democrats combined, he said — and has over 1300 volunteers. He attributes some of the lopsided voting margins in the past to Democratic lethargy.

“We haven’t really put up a fight here in a long time,” he said. “I think there’s a bit of a mea culpa to be had by the Democrats to say: we just haven’t shown up. We’ve given up on districts like this.”

Kanew’s campaign has attracted celebrity attention too. John Oates, of the rock-and-roll duo Hall and Oates, performed at a fundraiser for him on October 18 and teen show TV sensations Adam Brody (“The O.C.”) and Leighton Meester (“Gossip Girl”) have publicly endorsed him.

The couple also participated in a phone bank for Kanew’s campaign and have used their social media platforms to promote him.

“My dear friend (Justin) will be a true public servant — not for sale, not corruptible, on the right side of political and human issues,” Meester wrote in an Instagram post in July. “He’s compassionate and one of the good ones.”

Even with the star power, the campaign is a longshot. FiveThirtyEight currently classifies the district as “solid Republican,” and projects Kanew to receive 31.1 percent of the vote.

Kanew said he could have been more politically active when he was in college, preferring intramural sports and going to football games rather than extracurricular activities. Current Northwestern students interested in politics should get involved earlier than he did, he said.

He advised Northwestern students interested in politics to get involved with campaigns they believe in and run for something once they can, whether it’s Congress, as he did, or a local election.

Inspiring young people is one of the motivations that fueled his decision to run, he said, regardless of the result of the election.

“Even if we don’t shock the world and win, I hope that our campaign can inspire some people who may not have otherwise thought that running was in the spectrum of possibilities for them to do it,” Kanew said. “I think we need good, young people running for office all across this country for all kinds of offices.”

And so, with less than three weeks until Election Day, and facing statistically near-impossible odds, Kanew is as committed as ever to interacting with constituents and encouraging others to step up as he did.

Zev Glassenberg, a long-time best friend who competed with Kanew on “The Amazing Race,” said Kanew has been genuine on the campaign trail, and his positive qualities should convince others of what Glassenberg already knows.

“He’s been running this campaign for over a year in the 7th district of Tennessee and he showed every day that he’s smart, caring, compassionate, honest,” Glassenberg said. “He listens. He has heart and he just wants to help the people where he lives and do what’s right.”