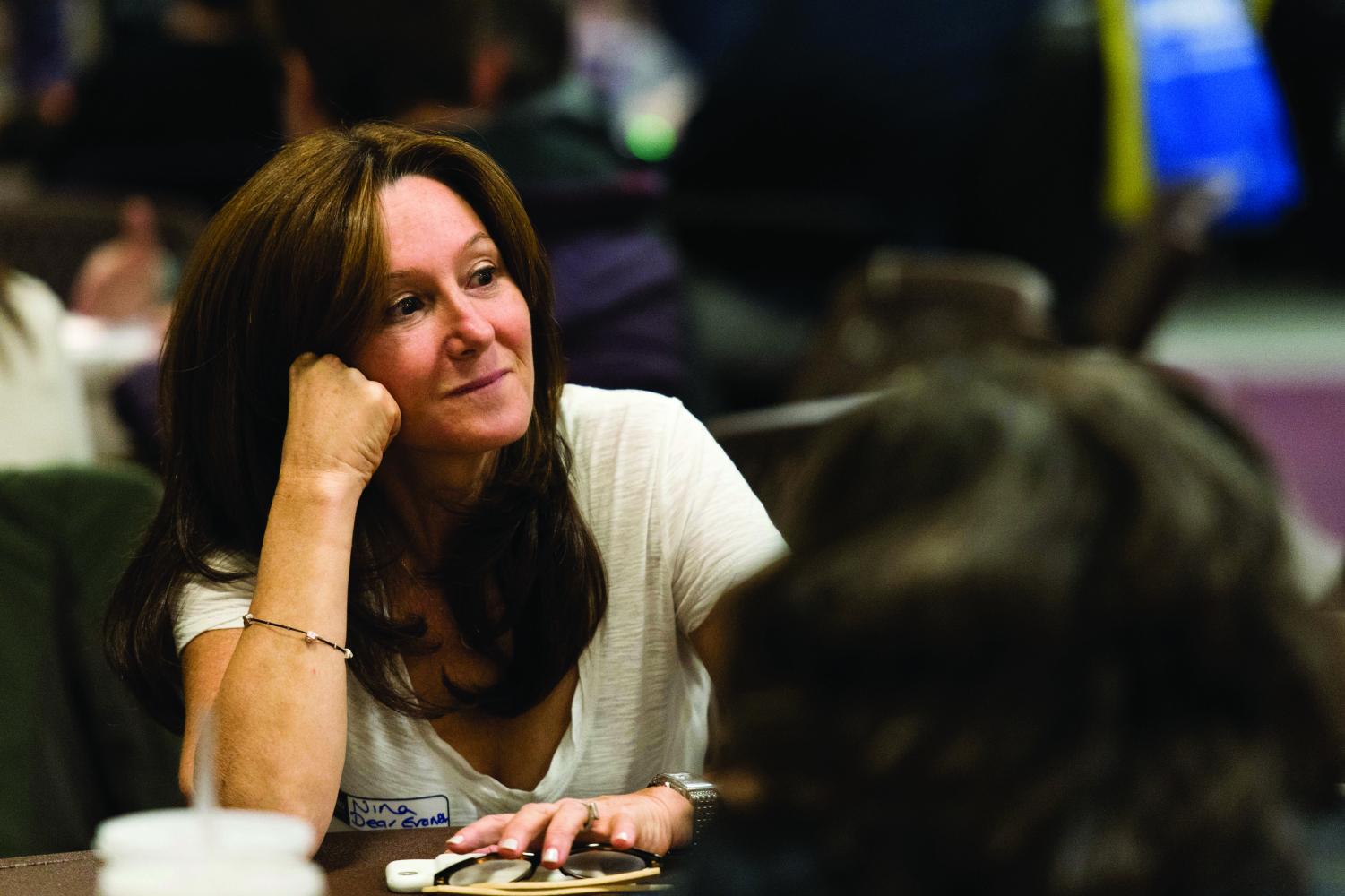 Nina Kavin attends a meeting. Kavin is the co-founder of the community activism group Dear Evanston.

She estimates there are currently 20 to 25 files stuck in cyber purgatory, waiting to be posted on Dear Evanston — Kavin’s local activism website — as she flies around the city organizing, attending and volunteering at events to make a difference in her community.

“I realized I couldn’t just tell stories over and over again,” Kavin said. “The stories in and of themselves are valuable and beautiful and powerful, but if you don’t follow stories up with action, then they’re just stories.”

Dear Evanston launched as a social media campaign out of the Evanston Community Foundation’s “Leadership Evanston” program in 2016, where Kavin worked alongside five other community members to investigate youth gun violence in Evanston. The project was only designed to last three months, Kavin said, but after it officially ended, she began running Dear Evanston on her own.

Almost three years later, Kavin has single-handedly grown the project into a trusted community source for news, events and discussions around central city issues. Dear Evanston’s Facebook page has over 8,000 likes, and Kavin recently revamped the website on her own — a challenge for the self-described “technologically incompetent” social media organizer.

She grew her network by interviewing people and telling their stories in new ways, giving them a platform to share them on their own terms.

“My passion is people and their stories, and compelling people to action through emotion,” Kavin said. “I think that that’s what people maybe get from Dear Evanston is that they feel my passion about the people in Evanston and about the issues in Evanston. It’s sort of like ‘I’m not a reporter, I’m just a person reporting what I feel and the people that I’ve met.’”

While Dear Evanston began as a platform to share stories about gun violence and provide actionable steps to combat it, Kavin said its scope widened organically when she realized she also needed to talk about the issues that were the underlying causes of the violence. As she listened to people tell their stories, she learned a lot about the history of injustice and inequity in Evanston and was motivated to become more of an activist in the community.

Though Kavin is not the first to tell these stories in Evanston, she is one of the first to have social media at her disposal and be able to share them with a broader audience.

She said Shorefront Legacy Center — an Evanston organization founded by Dino Robinson which focuses on preserving the North Shore’s black history — is one of the first places to gather similar stories from the community, and that she wants to help spotlight the work they and other organizations do.

Kevin Brown, the city’s community service manager, has worked with Kavin while managing Evanston’s Youth and Young Adult Division. He said Kavin is highly intelligent, thoughtful and passionate. Brown praised Kavin for being a “real truth teller in the community” and for highlighting that everybody — regardless of background — deserves an opportunity to succeed.

“She is really a community leader of a movement, she is very progressive in her thinking, she believes that people deserve an opportunity,” Brown said. “She is a stalwart fighting against injustice, highlighting examples of racism, sexism, I guess all of the isms that are out there. I think her platform is utilized to really try to bring people together, and that’s what I really love about what she does.”

Dear Evanston has brought people together in big ways over the past few years. Kavin has helped organize groups to attend major events like the 2017 Women’s March on Washington, a gun control advocacy event with the state legislature and a rally at Fountain Square to celebrate the lives of those killed by gun violence.

Kavin, who hails from Johannesburg, South Africa, said the United States’ history with gun violence and its passion for guns is incomprehensible to her, and that she doesn’t want to let it continue as the status quo. Because of this, she feels compelled to fight against the “epidemic” in every way she can.

“Whether it’s street violence, or mass shootings at schools and mass shooting at churches, and police shooting young black men, it’s just something that you don’t see anywhere else,” she said. “There are a lot of people in Evanston who struggle silently, (and) I think youth gun violence in Evanston is very much tied to… historical inequity in Evanston and in the country.”

Brown said Kavin has always had an interest in the development of young people, and praised Dear Evanston for providing a “sincere portrait” of those who are striving to be productive community members.

“I think that she has belief in her own heart that she’s called to this work and she’s called to sort of be a voice for those people who might be voiceless,” Brown said. “She’s been great at vocalizing for young people their needs, their desires, their wants, and I think that’s given people information that maybe they wouldn’t have gotten elsewhere.”

Pamela Cytrynbaum (Medill ’88) first became acquainted with Kavin on Facebook long before the two met in person. Cytrynbaum, a restorative justice coordinator for the James B. Moran Center for Youth Advocacy, said she began to see Kavin’s posts as a playbook for what she needed to keep track of in Evanston.

Cytrynbaum finally met Kavin at a march for gun reform in July that shut down the Dan Ryan Expressway in Chicago. Since then, they’ve run into one another frequently at community events.

The more Cytrynbaum has interacted with Kavin, the more she’s thought of her as someone who is really plugged into parts of Evanston, has accurate information and responds quickly.

“If I couldn’t trust her, then it wouldn’t have worked, even though it’s new-fangled social media,” Cytrynbaum said. “She has old school values which are: She wants to get it right, she wants to be accurate and she’s trying to tell the truth as she sees it…. That connected me and helped me trust her.”

Just as important, Cytrynbaum said, is that Kavin is active in the community; she isn’t just posting outrage on Facebook from her basement.

Over two years in, and hundreds of Facebook posts later, Kavin finds herself at a crossroads.

She is still unsure of whether she wants to find more people to help her grow the organization and keep up with the widening range of issues it covers, or if she will scale the group’s focus back down to create a more manageable workload for her one-woman crew.

She said it’s easy to lose the nuance among posts, shares and likes.

For Kavin and her computer full of interviews, there are never enough hours in the day.