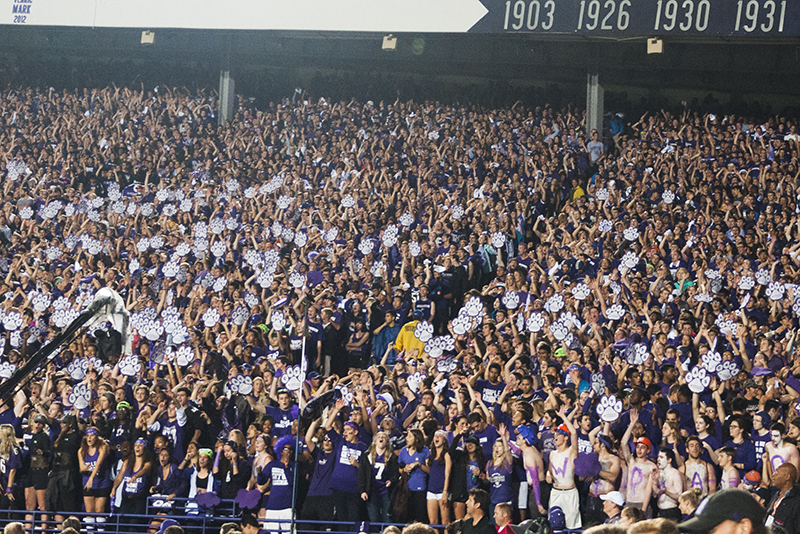 Northwestern had just lost a 40-30 heartbreaker to No. 4 Ohio State. The Wildcats had come within five-plus minutes of their first top-5 win since 1959, but fell short as their golden opportunity to make a statement to the Big Ten — and the rest of the country — slipped away.

Fitzgerald’s measured demeanor was a contrast to the raucous feelings of hope and excitement that had overtaken campus earlier that day. ESPN’s “College GameDay” had broadcast live from the Lakefill for the first time since 1995 to 1.69 million viewers that morning, and later that night, an audience of 7.36 million tuned in to watch the actual game.

No. 16 NU entered the game in the top 20 of the AP Poll during the regular season for the first time since 2001. The Cats had finished the 2012 season with 10 wins and their first bowl victory in 64 years, and were off to a 4-0 start to the 2013 campaign. But after losing to the Buckeyes, NU lost six of its final seven games and failed to reach bowl eligibility.

On that night — Homecoming five seasons ago — the college football world turned its eyes to Evanston, and the perennial, under-the-radar underdogs sat on the brink of not just national recognition, but national validation as a program that could compete in and potentially win big games.

“I was on campus that weekend and I had never seen the campus quite like that, in terms of the level of excitement, the energy, the anticipation,” Christine Brennan, (Medill ’80, ’81) a USA Today sports columnist and former Daily managing editor, told The Daily. “It’s hard to believe it’s five years ago, (but) I think everything has kind of come from that moment and grown from that moment.”

It took time — and another losing season in 2014 — but five years, 63 games and two bowl wins later, the Cats seem to be crawling out of the hole they fell into after that night. It’s an ongoing process, one that focuses on investing in and playing the game off the field as earnestly as the one on it.

James Prather watched the “GameDay” game from his living room in Memphis, Tennessee. At the time, he was a two-star linebacker without a Power Five offer who had never heard much about NU before tuning into the primetime game on ABC that October night.

“I saw how hard Northwestern played and how good of a game it was, so I was like, ‘Northwestern, great academics, and they should’ve beaten Ohio State out there on national television,” Prather said. “I’d have never heard of Northwestern if I hadn’t watched that game.”

Three months later, Prather committed to the Cats, becoming the final member of the class of 2014. The now-senior superback exemplifies how that national spotlight has helped draw players to Evanston.

That Class of 2014, which featured players like quarterback Clayton Thorson and Justin Jackson, was ranked No. 47 in the country by 247Sports — tied with the Class of 2007 for the highest a Cats class has been positioned since 2001.

Though that number has oscillated since 2014, the class of 2019 currently sits at No. 48 in the nation, a placing that doesn’t factor in the addition of Clemson transfer Hunter Johnson, a former five-star recruit who will be eligible to play for the Cats next season. The program’s ranking has not fallen below its pre-Class of 2014 average of No. 63. 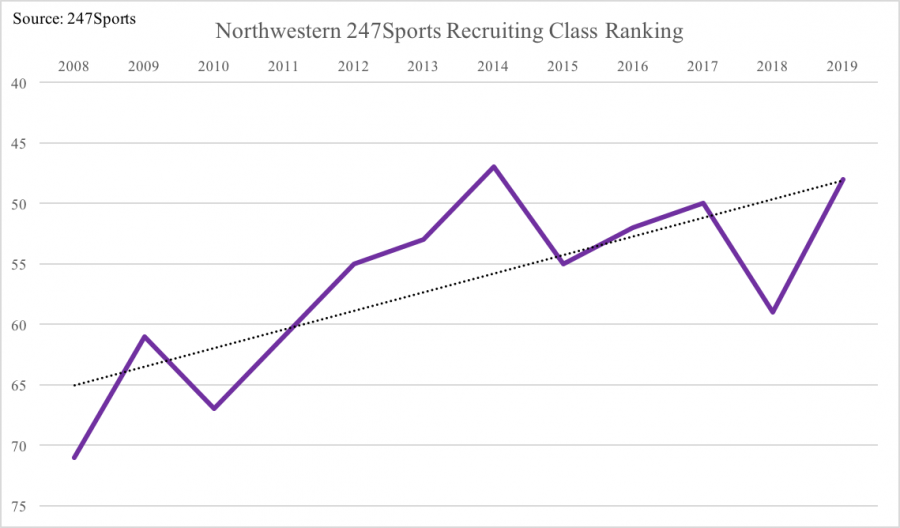 Matt MacPherson, NU’s recruiting coordinator at the time, noted that high-profile games and media attention have added another dimension to the NU recruiting pitch.

“When you can point to College GameDay, that’s being part of a big game. And now, you can keep throwing that in the mix of the city of Chicago, an elite education, big-time football, big-time media exposure,” said MacPherson, now the defensive backs coach. “There’s a lot that goes into that package.”

For many years, NU sat at the bottom of the Big Ten in more than just the standings. Attendance numbers fluctuated — Fitzgerald this week noted that there was no season ticket sales team when he was named head coach in 2006 — and NU’s off-campus facilities didn’t measure up to others in the conference.

But the opening of the $270-million Ryan Fieldhouse and Walter Athletics Center gave the program a state-of-the-art home on campus and embodied a commitment to Fitzgerald’s vision for the future of the program. The project, which had been announced in September 2012 and was officially completed this summer, was entirely donor-funded and brought NU back into the national headlines.

Northwestern is also earning more revenue than ever before. The Big Ten’s most recent media rights deal, signed in the summer of 2017 for $2.64 billion, is projected to bring a payout of more than $50 million per school in fiscal year 2018, according to Forbes. That’s a rise from $38.5 million in 2017 and now the highest amongst Power Five conferences.

Rising media contracts have directly benefited the program: the most recently available data from the Department of Education showed a $7 million increase in NU’s football revenue from 2013 to 2016, and a $23.7 million increase since 2003.

NU no longer lacks the resources that once kept it on the outskirts of the conference and even the country, Stewart Mandel (Medill ’98), who covers college football for The Athletic, told The Daily.

Like Prather, defensive back Jared McGee was a late NU recruit who hadn’t been too familiar with the program before he received his offer. The Mansfield, Texas, native had seen the Cats on a few televised games while in high school, but said the program hadn’t been on his radar until he met Fitzgerald.

“When I had committed (and was) telling people I was going to Northwestern, they’d think I was talking about Northwestern State in Louisiana,” McGee said. “It was definitely a small name.”

McGee said perception of NU has changed in the five seasons he’s spent with the Cats. The senior noted that the frequency of games on national channels rather than only on the Big Ten Network, the conference-owned network that reaches an estimated 60 million households, would likely make a high school football player in 2018 more familiar with Northwestern than one five years ago. 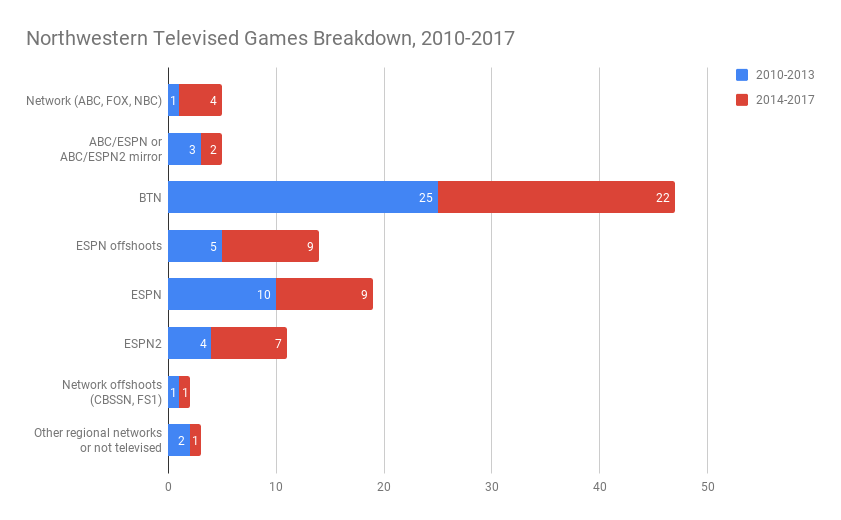 Though NU is rarely seen as the primary draw for national television audiences, the publicity the Cats have received through wider television coverage hasn’t hurt. Including the Sept. 29 game against Michigan — broadcast on Fox — and Saturday’s game against Nebraska — which will air on ABC — NU will have played in front of a national network audience six times in five seasons; the Ohio State game in 2013 was the first time the Cats had done so since 2006.

Ratings have correlated with that increased exposure. 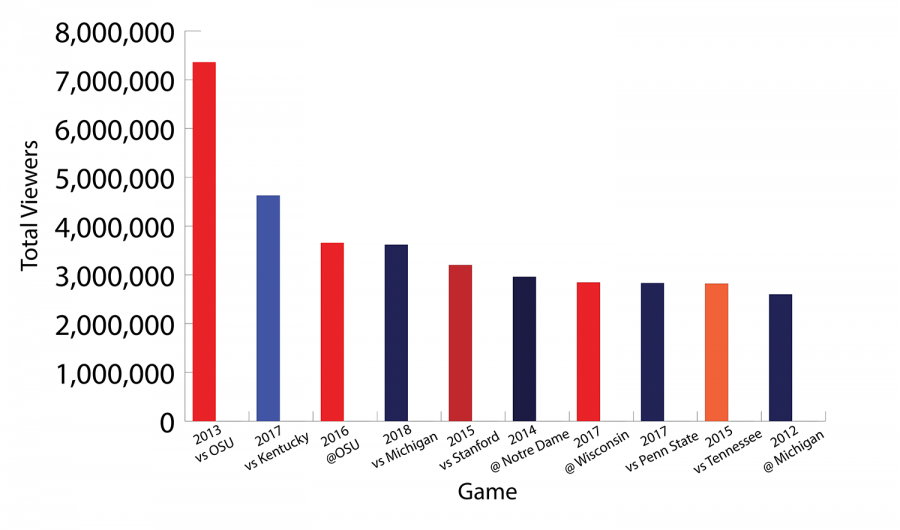 The likelihood of that national reach continuing to grow is high, both for this season and the future. The Nov. 3 home matchup against Notre Dame has already been chosen to air on either ABC, ESPN or ESPN2.

“The longer Pat Fitzgerald has been there, and at this point he’s one of the coaches around the country who’s been at their school the longest, they’ve just completely reinvented their brand,” Mandel said. “While they haven’t had another GameDay-type game like that since then, they’ve created a positive perception of that program.”

Hosting “GameDay” and almost upsetting one of the country’s perennial powerhouses isn’t like winning a bowl game or making it to a championship game. It doesn’t leave a trophy in the case, commemorating that it happened; it packs up and moves on to another school for another show and another story.

Many times, it doesn’t even leave the happiest memories. Ask a former student or a fan about the “GameDay” game and they’ll tell you about the atmosphere. Ask a coach or a player about the same event, and they’ll cite the score.

The memories of “GameDay.” The numbers that show improvement over the years. Even the arguments that Kain Colter did convert that fourth-down quarterback sneak late in the fourth quarter. None of those change the simple fact: In many ways, the game has been remembered more for what it could’ve been than what it was.

“That was the opportunity to say, ‘Hey, we’re actually capable on a national scale, capable of maybe winning a Big Ten championship every once in a while,’” said Rodger Sherman, (Medill ’12) who ran the NU-centric blog Sippin’ on Purple at the time and now writes for The Ringer. “And instead, they lost, and (then) they lost seven games in a row, and there hasn’t been anything close to that moment since.”

There’s no way to know how long it will be before NU plays in another game like that. But Fitzgerald and his program are still pushing — with bigger investments and better recruits and efforts to build and grow awareness in the stands and on television screens — so that when the time comes, they can break down that door.