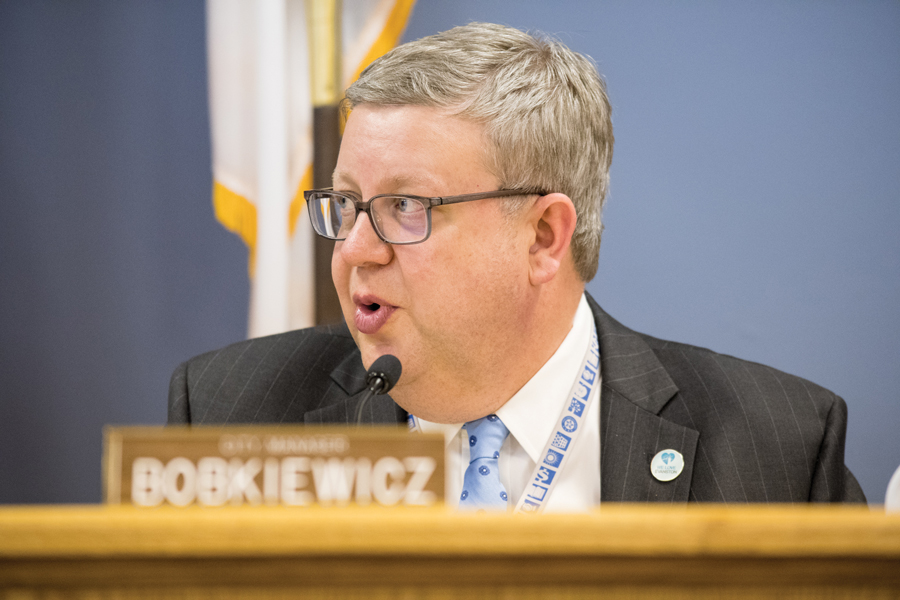 City manager Wally Bobkiewicz at a meeting. Staff proposed a Fiscal Year 2019 budget Friday that included a $7.4 million deficit, as a result of a general fund shortfall and expenditures. (Daily file photo by Colin Boyle)

City manager Wally Bobkiewicz at a meeting. Staff proposed a Fiscal Year 2019 budget Friday that included a $7.4 million deficit, as a result of a general fund shortfall and expenditures.

City staff has proposed department restructuring, staff layoffs and fee increases to fill next year’s budget deficit, a $7.4 million hole that has resulted from a combination of general fund shortfalls and new expenditures.

The city’s proposed budget, published Friday evening, is approximately $319 million, down about $19 million from last year’s numbers. City manager Wally Bobkiewicz said the deficit is a combination of three things: a $4.9 million general fund shortfall, a $1.5 million replenishment of recently depleted reserve funds, and plans for the new Robert Crown Center, which will require an extra $1 million for debt service on borrowed money.

“We’re trying to mirror revenues with expenses,” Bobkiewicz said to reporters on Thursday. “In order to better align revenues and expenses, we have to make reductions. … None of this is easy.”

To solve the deficit, Bobkiewicz said staff is suggesting decreasing expenditures by an additional $4.3 million and increasing revenue by $3.3 million.

Bobkiewicz said city staff is proposing to reduce funding to certain departments and restructure others, while implementing staff reductions throughout.

Many of the positions the city is looking to eliminate are already vacant, Bobkiewicz said, and others will be replaced by new staff performing the same type of work in a modified role. One of the vacant positions that is proposed for elimination is a video records clerk in the police department; the city created the position in 2018 to monitor footage from body and dashboard cameras, though it was never filled.

In total, city staff are proposing the reduction of three part-time and 16 full-time filled staff positions and the elimination of 21 vacant positions.

Bobkiewicz also said staff is proposing a $250,000 reduction in funding to the city’s Mental Health Board, as well as restructuring throughout the Department of Health and Human Services. He added that the Mental Health Board fund reductions are being suggested partially because the board receives funding from other sources outside of the city.

In addition, the proposed budget eliminates three Human Services Advocate positions — two of which are currently filled. To make up for the reductions, the budget proposes entering a contract with the Evanston YWCA to provide around-the-clock crisis response for domestic violence crimes.

The proposed budget also includes plans to close Evanston Fire Department Station 4 in the 2nd Ward, which would eliminate one filled and eight vacant positions in the department. Bobkiewicz said the area currently served by the station can be assigned to others across the city.

In addition to lowering expenses, the city is proposing to raise $3.3 million in additional revenue, a significant portion of which would come from fee increases.

Bobkiewicz said at a meeting in September that the reason for the fee increases and service cuts is partially a response to last year’s $14.5 million Evanston/Skokie School District 65 referendum, which raised property taxes across Evanston.

Following the referendum, many residents expressed concerns with a possible rate increase. Bobkiewicz emphasized on Thursday that this year’s proposed budget does not propose raising the property tax rate.

The city is expecting a combined $1 million increase in property tax revenues from the closure of a tax increment finance district at the end of the year.

The budget also proposes that the city stop operating the Gibbs-Morrison Cultural Center, at 1823 Church St., in the next year. Bobkiewicz said ceasing programming there would have “the least impact city-wide,” but that the building — and the First Slice Pie Café within it — would remain open and city officials will start a discussion about future plans for the space.

Other increases in revenue to balance the budget may include an increased fee on rideshare trips which begin or end in Evanston, a higher cost for vacation rental permits, and a parking meter rate increase — from $1 to $2.

Budget discussions have gone on all throughout 2018, since the city began employing a system of priority-based budgeting. The practice was focused on gathering resident input on which programs and services they deem important and which ones could be eliminated or funded less.

The results of the survey, which was taken by 3,299 residents, showed mental health and the Youth and Young Adult Division as high priorities for residents, while services like Divvy Bike racks and vacation rental permits rank highest on the list for possible elimination.

Bobkiewicz said on Thursday that staff will be further using the results of the survey as they continue to analyze different areas of the city and the services provided within.

“One of the things we learned is that everything is a priority,” he said. “We will not have enough information to act on it in this budget.”

Bobkiewicz said that as a result of the survey, deputy city manager Kimberly Richardson will be looking at social services throughout the city over the next two years, employing a two-pronged process.

She said the majority of social services in Evanston are currently being provided by departments like Health and Human Services, Parks and Recreation, as well as Community Development. Richardson said she will be looking for “a common mission and purpose” among the department and then considering their structure to “see if there’s better ways to provide the same resources and maybe more resources if we realign either all or some in one department.”

“The goal is not to look at it from an elimination standpoint but from a service-delivery standpoint,” Richardson said.

The budget proposal will be formally presented to members of City Council on Oct. 22, and the city will host a public hearing on the budget on Oct. 27. Until then, residents can submit their own version of a balanced budget and provide feedback through an online tool available on the city website.