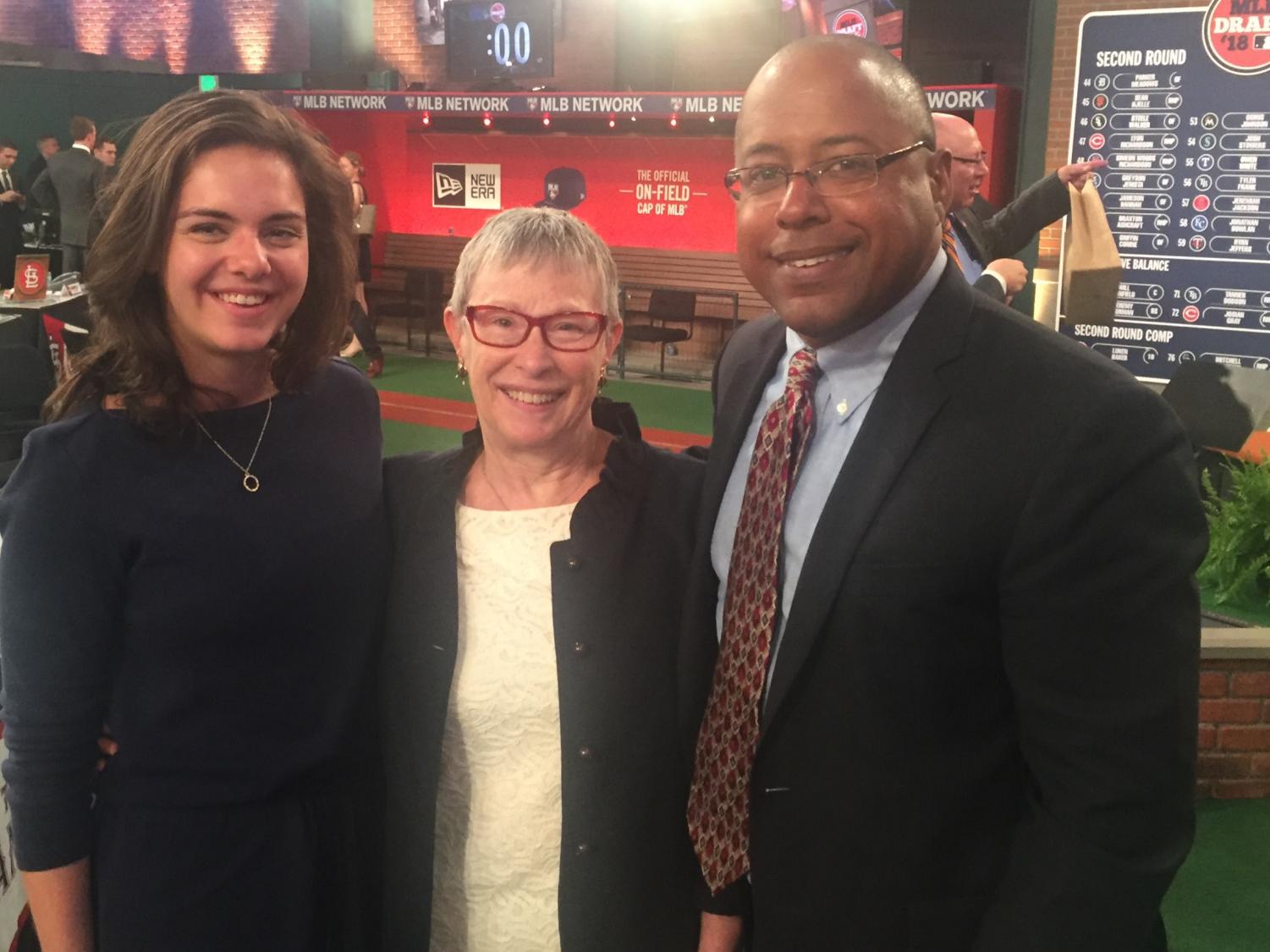 Katie Krall (left) poses for a picture on her first day of work at the 2018 MLB First Year Player Draft. Krall joined the three-year MLB Inaugural Fellowship program this summer.

Billy Beane. Theo Epstein. Dave Dombrowski. They’re the names that come to mind when you think of Major League Baseball general managers, architects of teams that have competed for World Series championships year in and year out.

They also all happen to be men.

Katie Krall (Weinberg ’18) hopes to change that one day. Krall graduated from Northwestern this June in just three years, and is now working in the office of MLB Commissioner Rob Manfred as part of MLB’s inaugural Diversity Fellowship program. Her ultimate goal is to become MLB’s first female general manager.

“Just having that one person who’s putting a tiny chink in that glass ceiling is so powerful, to have a physical representative of what’s possible,” Krall said. “I don’t think being a woman hinders me at all in this game. If anything, it brings a unique perspective.”

Krall grew up in Park Ridge, Illinois, about a half hour’s drive from the NU campus and was drawn to baseball from a young age. Her godfather, Rick Stelmaszek, was the bullpen coach for the Minnesota Twins for 32 years, and her mother was on the board of the Illinois Sports Facility Authority, which oversees Guaranteed Rate Field, home of the Chicago White Sox.

She was also a promising young athlete herself. Krall and her twin sister Annie, who is also an NU student, had offers to play college golf at Yale, Georgetown, Carnegie Mellon and Washington University in St. Louis. They both ultimately chose to attend NU, where Katie majored in history, in order to focus on their studies.

“What I knew Northwestern would provide me, especially with the world-renowned department and faculty, is the critical thinking and the analytical skills that I wanted,” Krall said. “Liberal arts, what it trains you for, is the ability to look at a situation and problem-solve.”

Krall was very involved in baseball during her time at NU. She interned with Culloton Strategies, a crisis management firm in Chicago, beginning in August 2016. Culloton’s clients include the Ricketts family, owners of the Chicago Cubs.

When the Cubs ended their 108-year championship drought by winning the World Series that fall, the team wanted a way to make their long-awaited championship more accessible to their large fan base. Krall served as a coordinator for the World Series Trophy Tour as the trophy made its way to various locations throughout the Midwest.

“Everybody at the team was very impressed with the work that she did,” said Dennis Culloton, president and chief executive officer of Culloton Strategies.“She had all the enthusiasm and all the attention to detail. In my mind, I opened the door to a future Theo Epstein.”

Krall got her first experience with baseball operations last summer, interning for the Hyannis Harbor Hawks of the Cape Cod Baseball League. She wrote scouting reports, monitored new-age statistics such as exit velocity and spin rates and worked with players regarding the implementation of defensive shifts.

Harbor Hawks General Manager Tino DiGiovanni said he was very impressed with Krall’s work and never knew that she was just 19 during their summer working together.

“She had talent, there’s no question about that,” DiGiovanni said. “She might be a ways from (becoming an MLB general manager) only by perception of the men in baseball that have to accept it, but once they realize (her potential), she’ll make out fine.”

Krall had initially wanted to attend NU’s Kellogg School of Management after graduation, but English Prof. Bill Savage sent her the information about the MLB Diversity Fellowship program, designed to promote women and people of color into front office executive roles.

For Krall, the opportunity was too good to pass up. Just 22 out of 1,300 applicants were selected to be a part of the program – an acceptance rate of less than 2 percent.

“It really became something that I knew would be a once in a lifetime opportunity if I were fortunate enough to be selected,” Krall said. “It was definitely a shock but without a doubt one of the most incredible honors I’ve ever received in my life.”

During the fellowship, which lasts three years, Krall will work in the baseball operations, labor relations and umpiring, and on-field regulations departments in New York. She will then be placed with one of MLB’s 30 clubs based on need and compatibility, she said.

Krall is hoping that this program is just a first step, however. She strives to be a role model for other women in MLB front offices and to inspire them to follow their dreams.

“I had assumed because of my gender that I would never be taken seriously in the departments that I wanted to be in long term,” Krall said. “(The fellowship) would just take me right away based on my abilities. It was so unheard of and I’m so blessed and so fortunate that the timing worked out because just three or four years ago, I don’t think this would have been possible.”