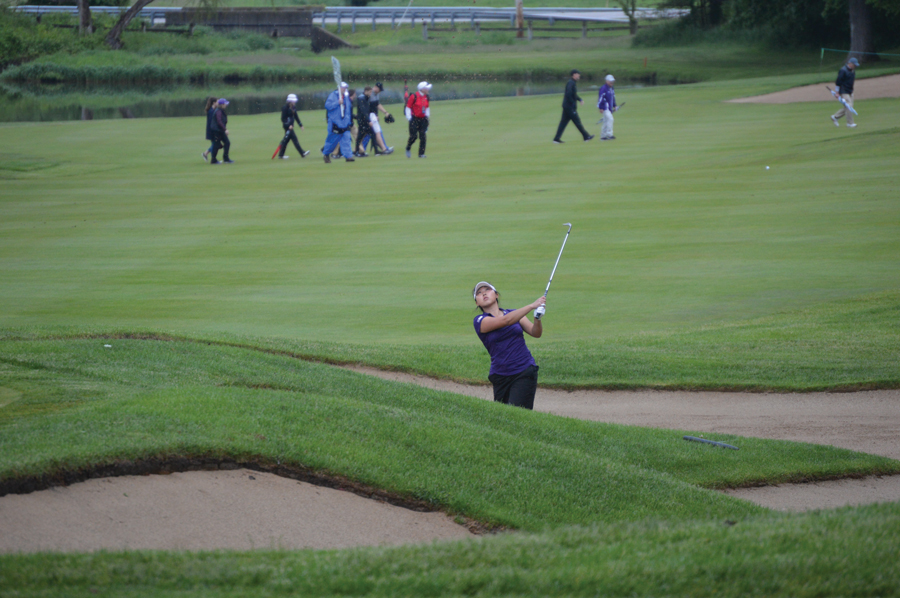 In their four years at Northwestern, Hannah Kim and Sarah Cho were part of the four best finishes in the history of the women’s golf program, including a second-place finish at the 2017 NCAA National Championships. Here, they tell their own story of why they came to Northwestern, how they helped build one of the best programs in the country and the fun they had along the way.

Kim: Both of us wanted to go to Stanford, USC, UCLA. Maybe I’m just speaking for myself, but I did. But I wasn’t getting any offers from them. And I honestly wanted to get out of my San Diego bubble. I wanted to experience something outside of California, and I think Northwestern really offered that opportunity to me.

Cho: I only got a few offers, so it wasn’t like I was getting offers left and right. Our class wasn’t necessarily the strongest class. … I was looking more toward the Midwest, and then maybe one or two schools in California. But I knew I kind of wanted to get away from California.

Cho: A lot of people overlook that just because you come in together as freshmen doesn’t mean you’re instantly going to be buddy-buddy. It’s a process, but I think that’s OK if you don’t click right away. As long as you guys grow together and sit back and realize, “OK, we’re two different people.” But being able to be on the same team and be friends, that’s part of the journey at Northwestern.

In addition to their friendship, both Kim and Cho found early success, with Kim finishing third in her first collegiate tournament and Cho winning the Big Ten Tournament as a freshman.

Kim: I would never say I’m good because I finish. It was more, “Woah! I finished top-3! I can’t believe it! What just happened?” As a freshman, you don’t really expect much. You’re kind of thrown into the water and expected to learn how to swim. Freshman year is the most refreshing year because no one has expectations for you.

Cho: Not to go too deep in the past, but Kaitlin (Park) and (Suchaya Tangkamolprasert), who graduated two years ago, were really, really good about taking care of underclassmen. It may not consciously implement those things in us, but it does. We know what it feels like, and someone else has done it for us, so we just want to pass it on.

Kim: Freshman year, obviously, we were just kind of figuring out what the team dynamic was like. They were all older than us. We were pretty intimidated. Sophomore year, we had freshmen to take care of, so we have a sense of leadership in that. And then I don’t know if it came naturally, or it’s something that happens to every player that goes through the Northwestern team, but our team has gotten closer and closer every year.

Kim: We definitely have a really good balance.

Cho: Yeah, if we were all like, “I don’t care,” (and) always happy, that would never bring us any success. But then on the opposite end, if we’re always really super serious and down about a bad round…

Kim: (Then) I don’t think any of us would even be friends.

Cho: And I don’t think we’d even do the best that we could. Having that balance is really nice.

The culmination of those efforts came at the 2017 National Championships at Rich Harvest Farms, just a short drive from Evanston in Sugar Grove, Illinois.

Kim: I will never forget Rich Harvest. Rich Harvest is by far the best experience I’ll ever have (in college). I think that was the epitome of college golf. Having a sea of purple out there, being able to play in our home state and just having that camaraderie of Northwestern athletics all together, it was really special. And being runner-ups, that’s a really big accomplishment.

Cho: It was really different. I think that’s why we really loved it. Everyone came out, and everyone was just super into it. It got really loud, just hearing people cheer for every putt, every stroke. That was just really fun. And the way we came off of it was after we lost in our finals, I think that was my favorite moment of all time. And obviously, yes, it sucks to lose, but it just reminded me of how much we support each other.

Kim: That’s the beauty of our team. When it comes to golf, we can grind it out, put our heads down and play the best golf that we can. But outside of the golf course, we separate golf and our own individual personalities from that, and I think that’s where we find the joy in it. We really love the small things, and we take it so personally to our heart.

In 2018, the team lost in the quarterfinal round of the National Championships. With her collegiate career complete, Kim plans to play golf professionally on the LPGA.

Kim: It’s definitely a different type of pressure now. In college, it’s like even if I do play bad, I’m still going to keep my scholarship, I’m not going to get kicked off the team. I feel like there’s a level of comfort with that. With (professional) golf, it’s like, if I have one bad round … I mean, this is an extremity, but like I might not be able to eat.

Kim: I’m just saying I’ve got to put food on the table and a roof over my head. (Golf is) my sole income now, so there’s a different pressure in that. But there’s also some excitement and enjoyment because, woah, this is something I’m doing for a living.

Cho: This year really opened my eyes, because it was the aftermath of a really good year we had last year, not only golf-wise but really as a team. You really appreciate the really hard practices, the long trips. Even though it’s hard, you find the fun in it. You’re not going to be able to do this again, so you really appreciate it, you enjoy it.

Kim: We had a lot of fun these past four years. And if we were asked if we would do it all over again, I know I would. I would do Northwestern all over again.

Cho: It doesn’t seem like our impact is that much, or I don’t feel that anyway. I feel when everyone is there together, that’s when we thrive at our best. But then this year, everyone tells us, “Oh we’re going to miss you guys. You guys mean so much.”

Kim: “It’s going to be so different without you guys next year,” (they said).

Cho: I think that’s special to hear, as a senior especially — to know you did contribute something in that way.