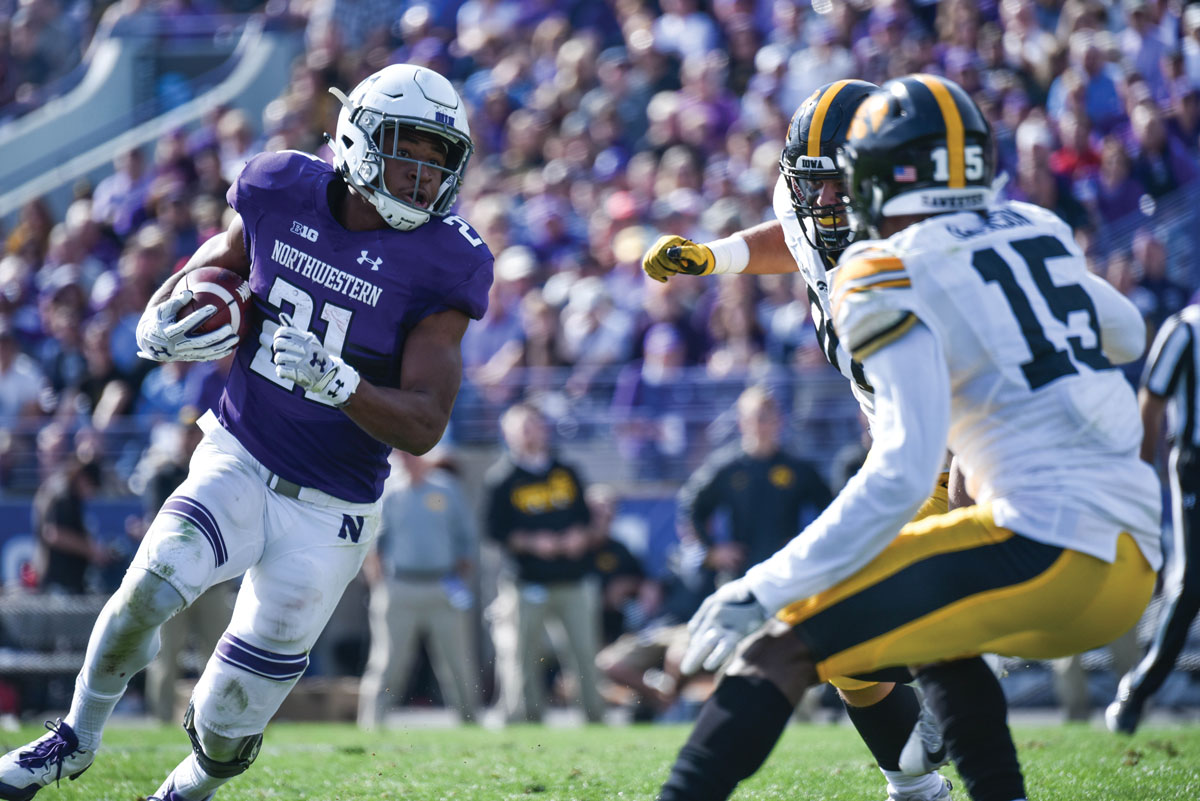 The Daily’s Sports Staff examines the past year in Northwestern sports in our annual end-of-year review. 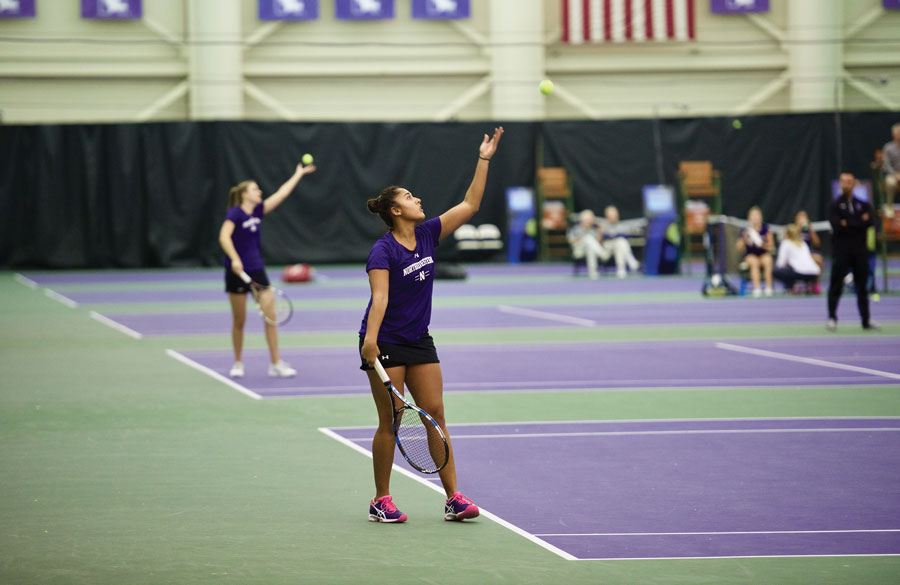 Team of the Year: Women’s Tennis

A perennially excellent program throughout coach Claire Pollard’s nearly two-decade run at the helm, Northwestern women’s tennis had suffered a slight dip in recent years. In 2018, however, a trio of dominant seniors — Erin Larner, Maddie Lipp and Alex Chatt — brought the Wildcats back to the top.

Individually, Larner went 17-2 in singles, Lipp went 18-5 and Chatt went 16-8; in doubles, moreover, Larner and Lipp tallied a 19-4 record and rose to the very top of the NCAA doubles-pair rankings. Their collective supremacy helped NU survive a mediocre 3-3 start and establish its contender status with wins over three teams ranked in the top 10 at the time: Vanderbilt, Illinois and Georgia Tech.

The Cats ultimately rolled through their conference schedule, with dramatic 4-3 road wins at Michigan State and Michigan in early April proving to be the only near-road bumps en route to a perfect 11-0 Big Ten record. Despite being upset by the same Wolverines in the Big Ten Tournament final, NU still hosted an NCAA Regional and defended home court by sweeping both Buffalo and Kansas State.

Although a loss to Duke in the tournament’s round of 16 ended the postseason run, the Cats still finished with their most wins (23) since 2009.

Runner-up: Lacrosse. Another long-term dominant program coming off a few down years, a fast-paced offense spearheaded by Selena Lasota and Sheila Nesselbush propelled the Wildcats to a 15-6 record and an Elite Eight appearance. 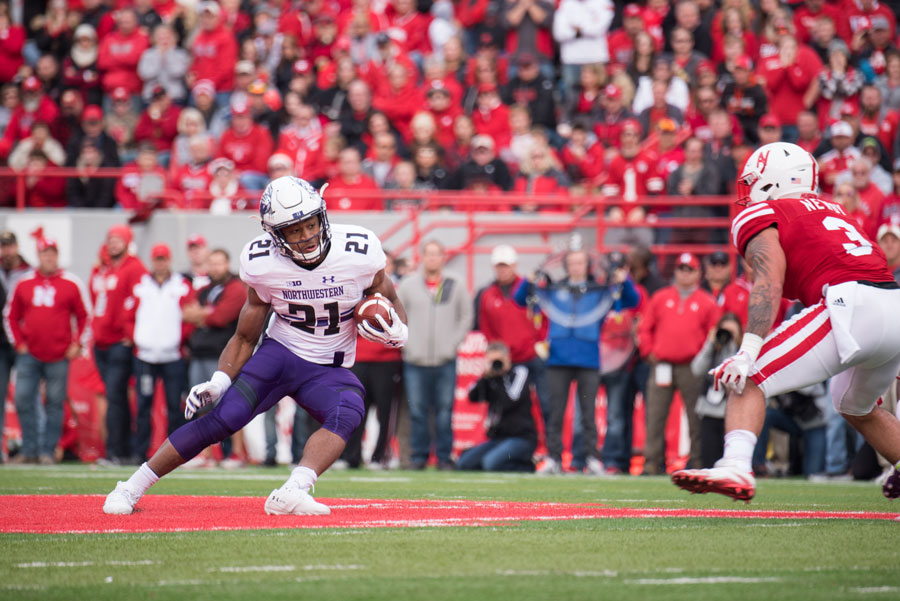 Winning this category for the second consecutive year, Justin Jackson remained the indisputable face of Northwestern athletics in 2017-18 and cemented his place as one of the most accomplished players in football team history.

The undersized but quick and physical running back ran for 1,311 yards and 11 touchdowns. Although those numbers were down slightly from his unstoppable 2016 campaign, he did set a career high with 276 receiving yards.

Jackson, who was drafted by the Los Angeles Chargers in this spring’s NFL Draft, finished his career as a four-year starter with 1,142 rushing attempts for 5,440 yards and 41 touchdowns. He now tops the NU record books in all three categories and stands as just the ninth player in FBS history to rush for more than 1,000 yards in four different seasons.

Numbers alone, however, cannot fully describe the impact that Jackson had on both the football team and the University as a whole. As well-known among the student body as perhaps any other figure in Evanston, Jackson’s humble, soft-spoken personality and resilient, unflappable playing style exemplified the team culture that coach Pat Fitzgerald has spent his entire tenure seeking to develop.

He leaves NU as arguably one of the most respected and renowned athletes in school history.

Runner-up: Dylan Wu, men’s golf. Wu concluded his career with the second-lowest stroke average in Northwestern men’s golf history and led the 2018 team to its first NCAA Championships since 2011. 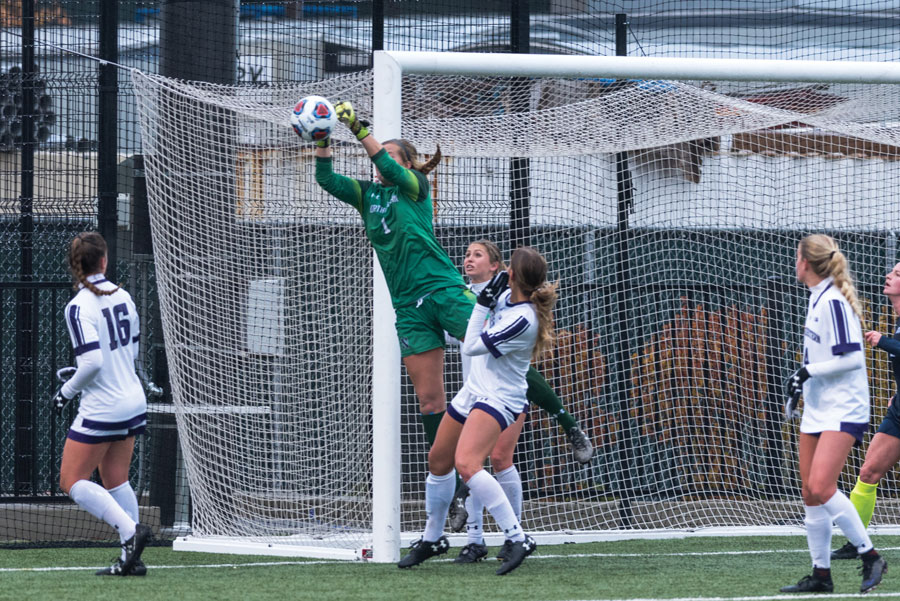 Lauren Clem’s absolute mastery of the goalkeeper position cannot be more clearly stated than by the following statistic: Her career goals-against average, 0.64, is the best in program history. The second-best mark, set by 2002 graduate Susie McCreery, is 1.23 — by comparison, astronomical.

Clem finished her career also topping the NU record book in minutes played and the Big Ten record book in career shutouts, with 49. Her 0.78 goals-against average and 11 shutouts in 2017 would have been the best in NU history if not for Clem’s equally jaw-dropping 2015 and 2016 campaigns.

She saved her best form of the season for its final stages, too. The senior recorded four straight clean sheets to close the regular season and helped the Wildcats advance to the Big Ten Tournament championship game. Then, in the NCAA Tournament, she stopped three consecutive penalty kicks in a first-round win over Butler, then made a season-best 12 saves in the second round against UCLA, keeping NU alive for 92 minutes despite being out-shot 28-2.

The clear leader and biggest star of one of the Cats’ fastest-rising athletics programs, Clem’s shoes will be difficult to fill next fall. 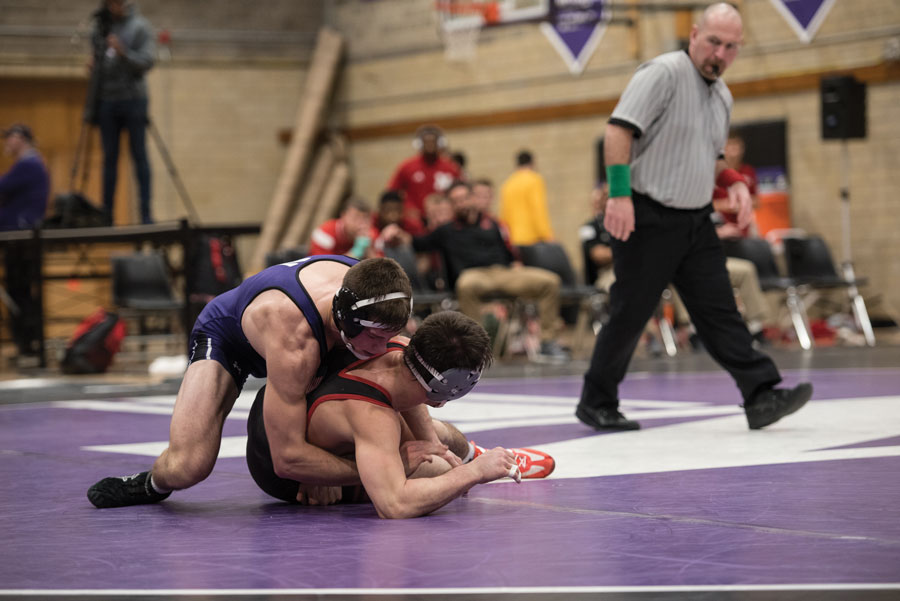 Officially competing for NU for the first time in 2017-18 — he wrestled “unattached” in 2016-17 while technically redshirting — Ryan Deakin was one of the major reasons the Wildcats experienced a surprising breakthrough as a team.

The Colorado native posted a 32-7 overall record on the season, including a 14-1 mark in dual matches (the only ones which count in the team’s record), in the 149-pound weight class. Although he was not the only star freshman on the roster — 125-pounder Sebastian Rivera posted an almost-as-impressive 12-2 record in dual matches — Deakin led the Cats in both wins and falls.

Deakin’s star status was cemented Jan. 28 when he pinned Benjamin Brancale of 14th-ranked Minnesota in less than three minutes, giving NU a dramatic 2018 statement victory over the Golden Gophers. His momentum continued into the postseason, culminating with two wins at the NCAA Championships in March. 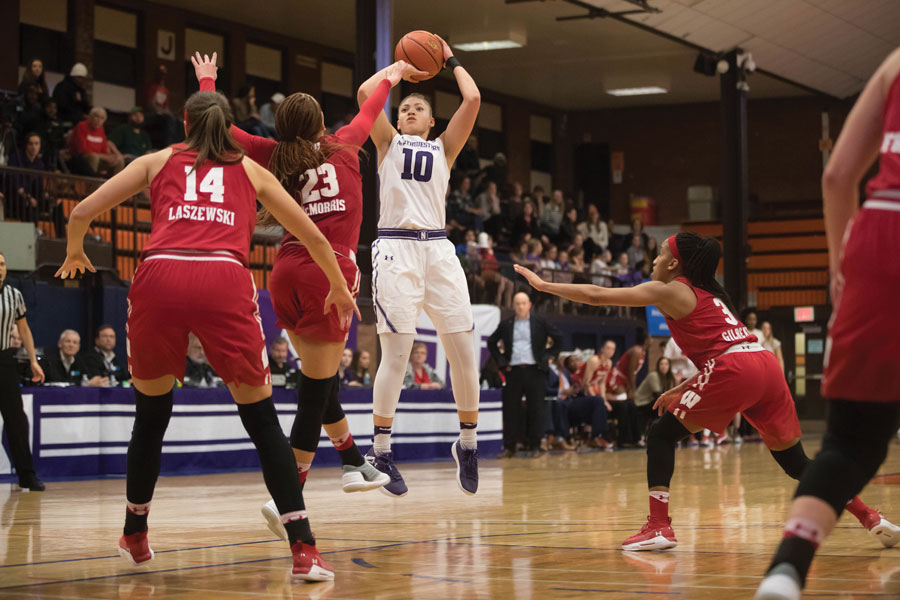 On a remarkably young NU women’s basketball team, a small but overwhelmingly poised and confident freshman provided the biggest reason for future optimism.

Lindsey Pulliam, a 5-foot-10 point guard from Silver Spring, Maryland, made it clear at the start of the season that this Cats team was her team. Pulliam scored 18 points in a season-opening win over Chicago State and never looked back, eventually leading all Big Ten freshmen in scoring with 15 points per game.

Pulliam saved many of her best performances for the biggest stages. In a marquee nonconference road trip to Syracuse, Pulliam erupted for 29 points on 13-of-20 shooting as NU nearly pulled off the upset. In her first-ever Big Ten game, Dec. 28 against Minnesota, Pulliam tallied 22 points. In an early-February visit to Indiana, she exploded for 33 points to help the Cats shockingly force overtime. In a win over Wisconsin in the first round of the Big Ten Tournament, Pulliam was a very efficient 9-for-15 for 24 points.

Storniolo, a part of the Cats’ coaching staff since 2009, was unexpectedly thrust in charge when former coach Drew Pariano left shortly before the 2015-16 season. The program’s disorganization and a string of injuries cursed Storniolo’s team to a dreadful 2-13 record that year.

But the former Penn State wrestler righted the ship with a respectable 7-8 campaign last year, then transformed his team into the biggest breakout on campus this past winter.

Storniolo’s squad made waves by upsetting No. 16 Wisconsin and No. 14 Minnesota in January shortly after a 6-0 start to the season, then closed the regular season with a three-match win streak over No. 22 Purdue, Indiana and Southern Illinois-Edwardsville. NU eventually placed 24th nationally at the NCAA Championships.

With almost his entire roster returning in 2018-19, Storniolo’s program is likely to only ascend further moving forward.

Runner-up: Kate Drohan, softball. Drohan overcame a season-ending injury to veteran pitcher Kaley Winegarner in the second weekend of the season to guide the Cats to a 38-19 record — a 13-win improvement over 2017 — and an NCAA Regionals appearance. 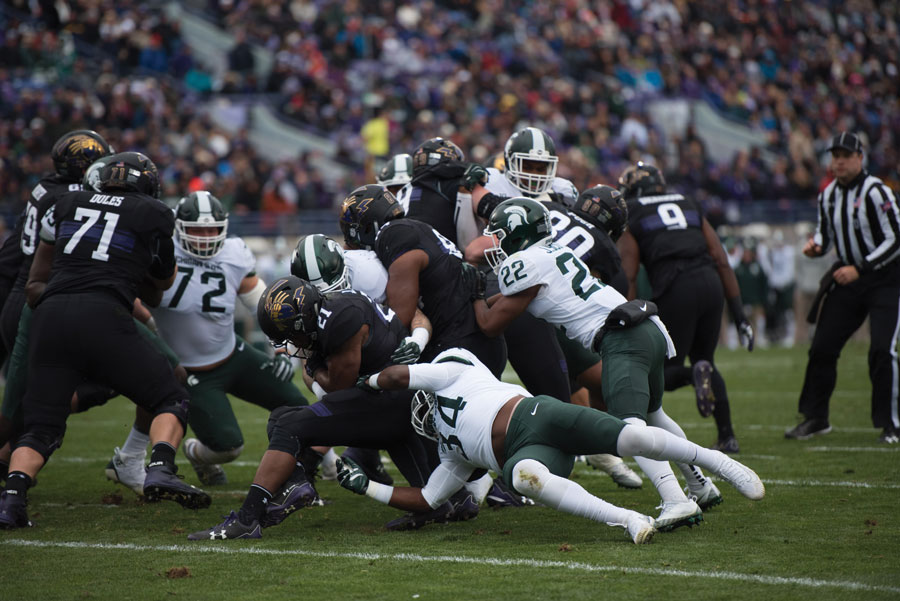 Game of the Year: Football vs. Michigan State

For much of the damp afternoon of Oct. 28, NU looked like it would pull off an upset of No. 16 Michigan State in the most stereotypically Pat Fitzgerald-esque style ever: slow, ugly and boring, yet effective nonetheless.

Then, as the afternoon turned to evening, the classic Big Ten slugfest suddenly erupted into a dramatic, back-and-forth, triple-overtime shootout that will go down as one of the most memorable games in recent Ryan Field history.

The Cats took a 17-10 lead with 10 minutes to play on a halfback pass from Justin Jackson to receiver Ben Skowronek, but the Spartans tied the game with a miraculous 13-yard touchdown catch with 25 seconds left. Then, in both overtime and double overtime, both offenses scored touchdowns to keep the game going.

Though unquestionably less mind-blowing than the men’s basketball buzzer-beating win over Michigan in March 2017 — last year’s winner of this award — the absurd game and ensuing field-storming made a memory that few of the 39,369 in attendance will ever forget.

Runner-up: Softball vs. California. In a loser-goes-home game in the NCAA Regionals, the Cats trailed 3-1 and were one out from elimination when Rachel Lewis doubled in two game-tying runs; soon after, she scored on a wild pitch to walk it off, 4-3.