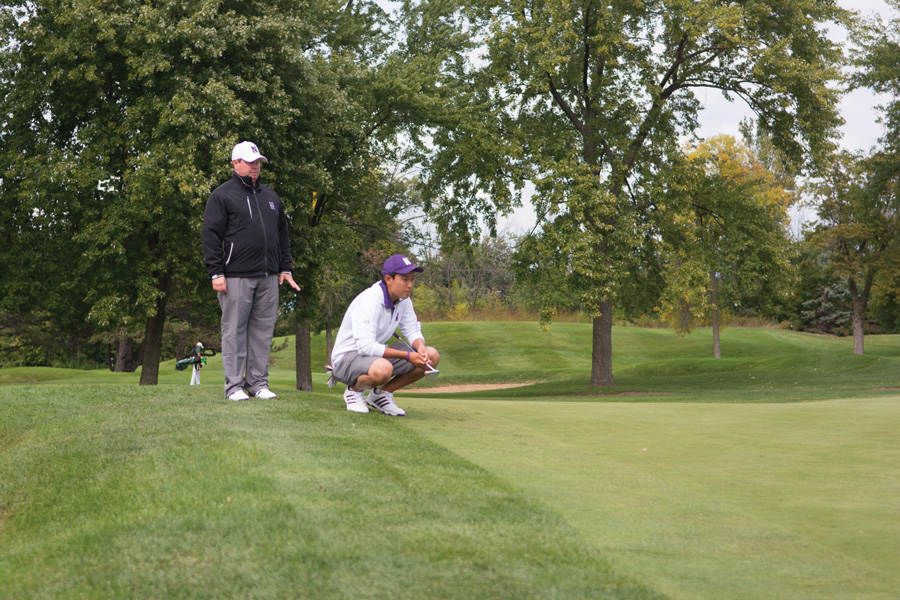 Dylan Wu taps a putt. The golfer completed his accomplished Northwestern career at the NCAA Championships on May 27. (Daily file photo by Lauren Duquette)

Dylan Wu taps a putt. The golfer completed his accomplished Northwestern career at the NCAA Championships on May 27.

He was only a freshman playing in his fourth-ever collegiate tournament, but Wu was leading the competitive Gifford Collegiate heading into the 15th hole of the final round. Then Wu hit an approach shot into the top of a bunker and double bogeyed the hole, dropping him from a stroke up to a stroke behind UCLA’s Jake Knapp.

Wu “lost his mind” after that hole, coach David Inglis said. And after a rough tee shot on 16, it went from bad to worse.

“He hit a bad shot and lost his temper again, starts muttering under his breath, getting mad and I ended up just hugging him,” Inglis said. “I just grabbed him and just wouldn’t let him go until he got it out of his system.”

Wu calmed down. He managed to save par on 16 and put himself in a position on 18 to win. After Knapp bogeyed the hole to finish 8-under for the tournament, Wu sunk a birdie putt to finish the tournament at 9-under and secure the individual championship.

That day is one of the most significant in Wu’s golf career.

“There’s just a lot of things from that day I look back to,” Wu said. “I know that when I’m playing my best golf that I can play against the best players in the country, but the biggest thing for me to do that on a day-to-day basis is to really have that emotional toughness and mental control over my game and over my mind.”

Wu’s competitive fire was always one of his most defining characteristics on the golf course.

“The big thing that stuck out to us about Dylan (while recruiting him) was just his competitiveness and desire to be a great player,” director of golf and player development Pat Goss said.

Growing up in Oregon, Wu was the oldest child in a family of golfers. Wu’s father, Kevin, picked up golf when Dylan was born and then became a pretty good golfer himself, Wu said. His younger brothers — twins Jeremy and Josh — golf for Valparaiso and Air Force, respectively, and each won an individual state title (Dylan won two). His younger sister, Kaylee, has finished in the top five at the Oregon high school state championships the past three years.

Wu said he realized his love for the sport when he beat his father for the first time at a tournament at the age of 12 or 13.

He loves golf for a few reasons. Wu is connected with his family through the game. He is drawn to its solitary nature, in which only the athlete is responsible for the performance. He is motivated by the impossibility of perfection.

“We knew that we were getting somebody that was hyper-competitive, loved golf and loved competition,” Inglis said. “If you have somebody like that, you’ve got them hooked. … He’s just really taken it to the next level with his work ethic every day and his willingness to really push himself to be the best he can be.”

Inglis added that Wu’s competitiveness was also valuable for his teammates and that Wu’s desire and passion made all of the golfers on the team better.

And despite his love of the individuality of golf, Wu — who is set to make his professional debut Thursday at the Freedom 55 Financial Open — said he will miss the team aspect of college golf.

“If you’re going to play professional golf the rest of your life, you’re never going to experience really anything like college golf,” Wu said. “Having that unique experience where you combine that individual game with a team atmosphere is something I’m really going to miss.”

Only a select few golfers in Northwestern history can go toe-to-toe with Wu’s level of success.

In addition to being a two-time All-Big Ten first-team member and second team All-American last spring, Wu owns the second-best stroke average in school history. The only Wildcat ahead of him is 1999 NCAA Champion and former No. 1 ranked golfer Luke Donald. Wu also has four of the top-15 single-season stroke averages in school history.

He had 33 top-25 finishes, including 12 in the top 5 and three individual titles. Wu was also a major reason the team improved from missing an NCAA Regional in 2015 — his freshman year — to making the NCAA Championships this spring, the first time since 2011.

But it was not just his achievements on the links that stuck out in the minds of his coaches. Off the course, Wu excelled at just as high of a level.

“He is the best student-athlete combination we’ve ever had,” Goss said. “To achieve what he’s achieved academically while majoring in economics with the minor and the certificate is really impressive. It’s such a high level of success.”

Outside of school and golf, Wu was active as well. He enjoyed following the run of the basketball team in 2017 and attending football games, being a member of Greek life, making friends with non-student-athletes and creating bonds with his professors.

But many of his smallest, yet fondest memories, he said, came walking on the Lakefill, looking out at Chicago and Lake Michigan and appreciating how much he truly loved NU.

“I remember thinking my freshman and sophomore year that it was going pretty slow,” Wu said. “But looking back at it now, it goes by fast.”

Now a senior playing in the fourth tournament of his final college campaign, he led the UNCG/Grandover Collegiate after two days of competition. But he started his third round with two bogeys, putting his lead in jeopardy.

Unlike four years prior at Gifford, Wu did not lose his temper. Instead, he keep his cool.

“I never really stressed out there,” Wu said. “I just let them be and never got frustrated. I just told myself, ‘There’s plenty of golf left, I’m playing well,’ and didn’t let any shot get to me.”

Wu birdied three straight shots on holes seven, eight and nine and then added two more birdies on the back nine on his way to a three-day score of 7-under. No other golfer came within four strokes of Wu as he won the tournament.

If Wu had that two-bogey start to begin his day before his freshman campaign, he said it likely would have greatly affected his play. But Wu is a different golfer now, and his mental makeup is just as strong as his physical game.