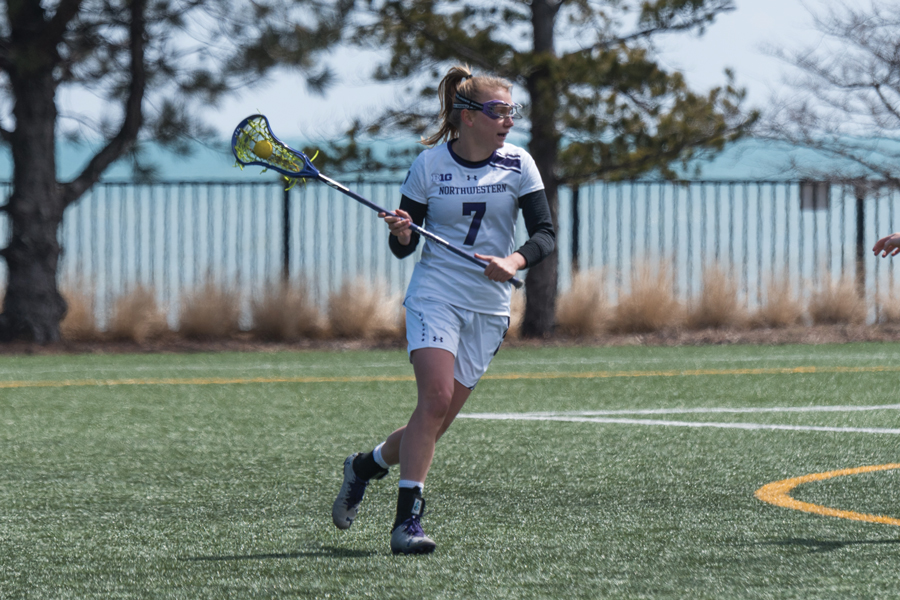 Although a year separates Northwestern lacrosse’s two Nesselbush sisters in age, Shannon Nesselbush said she and her older sister Sheila Nesselbush have always been close.

They shared a room growing up in Penfield, New York. They won a state sectional title for Penfield together in 2013, Sheila’s senior and Shannon’s junior year. And they both went on to play for the Wildcats, not even far apart numerically, with Shannon wearing number six and Sheila number seven.

Shannon pointed to a specific moment when asked how she’s seen Sheila grow since her first year. The younger sister visited Northwestern for a game during the 2014 season, just as Sheila was securing a spot in the starting lineup. Shannon said she watched Sheila give a pregame speech, and remembered coach Kelly Amonte Hiller demanding more enthusiasm and leadership from her then-freshman midfielder.

In the four years since, Shannon said, Sheila has found that voice.

“You wouldn’t even recognize her her fifth year,” said Shannon, a senior defender. “She’s so confident when she speaks, and whenever she speaks, she has such intention. She doesn’t just ramble on. When Sheila’s talking, everyone’s listening.”

Sheila Nesselbush’s path to the Wildcats wasn’t a typical one. The majority of women’s lacrosse players commit to a college very early on in their high school careers. Senior attacker Shelby Fredericks, for example, verbally committed to Northwestern when she was in ninth grade — but Sheila was different.

A four-year starting point guard in high school, she had spent much of her pre-collegiate athletic career focusing on basketball and didn’t seriously consider playing college lacrosse until her junior year, when she finished with 39 goals and 17 assists, leading Penfield to the state sectional finals. Her mother, Marlene, was making a highlight tape for Shannon, then a sophomore, in October 2012, and decided to put together one for Sheila too.

The tape was mailed out to a number of schools, but Northwestern responded immediately, Shannon said. The Wildcats had a partial scholarship available, and after a visit in late October, Sheila announced her commitment in November.

More than five years later, she acknowledged how her life could have been different if that tape hadn’t reached Northwestern at the right time, or if it hadn’t even been sent out in the first place.

“I probably wouldn’t be an athlete if it wasn’t for Northwestern,” Sheila said. “I’m very thankful.”

Amonte Hiller said Sheila’s story of arriving at Northwestern is part of the beauty of the program.

“Not every kid comes to us with the same background or the same path,” the coach said. “However they get here, we embrace them.”

Sheila said she didn’t come to Evanston with an expectation to make a difference as a freshman, but that changed on day one. Her first career start came in a 13-12 win against Virginia, and she started all of the rest of the games that season, including postseason matchups against Florida and Maryland.

That immediate success showed her promise and her potential.

“They both had had an impact on the program right away in their freshman year,” Amonte Hiller said of Sheila and Fredericks, who also started the majority of the team’s games her freshman year. “Any time you get a chance to impact right away and you get that experience, it’s a huge advantage.”

After a strong sophomore year, Sheila was forced to redshirt in 2016 after an injury knocked her out four games into the campaign. While the injury was a setback then, it produced a positive: She was granted another year of eligibility that made her 2018 breakout season possible.

Sheila set her personal career-high records in points, assists and goals in the 2018 campaign, finishing with 14 multi-goal games and two Big Ten Offensive Player of the Week honors. She saved her best performance of the year — and of her career — for one of the biggest stages, scoring 14 total goals in the Cats’ first- and second-round matchups of the NCAA Tournament.

High school senior Sheila probably wouldn’t have predicted that redshirt senior Sheila would end up here: In the record books of one of the most accomplished programs in women’s lacrosse history.

Her athletic career and college experience could have been completely different, if not for one game, or one injury or even one email. Perhaps it’s that awareness that led her to say that the biggest lesson she learned from the Northwestern program is to treasure the everyday.

“On this team, it gets hard and you have to push yourself, and sometimes you forget to appreciate those moments, (because) you’re looking forward to the game or the next week,” Nesselbush said. “This program does a really good job of helping us focus on the process and enjoying that while it lasts.”