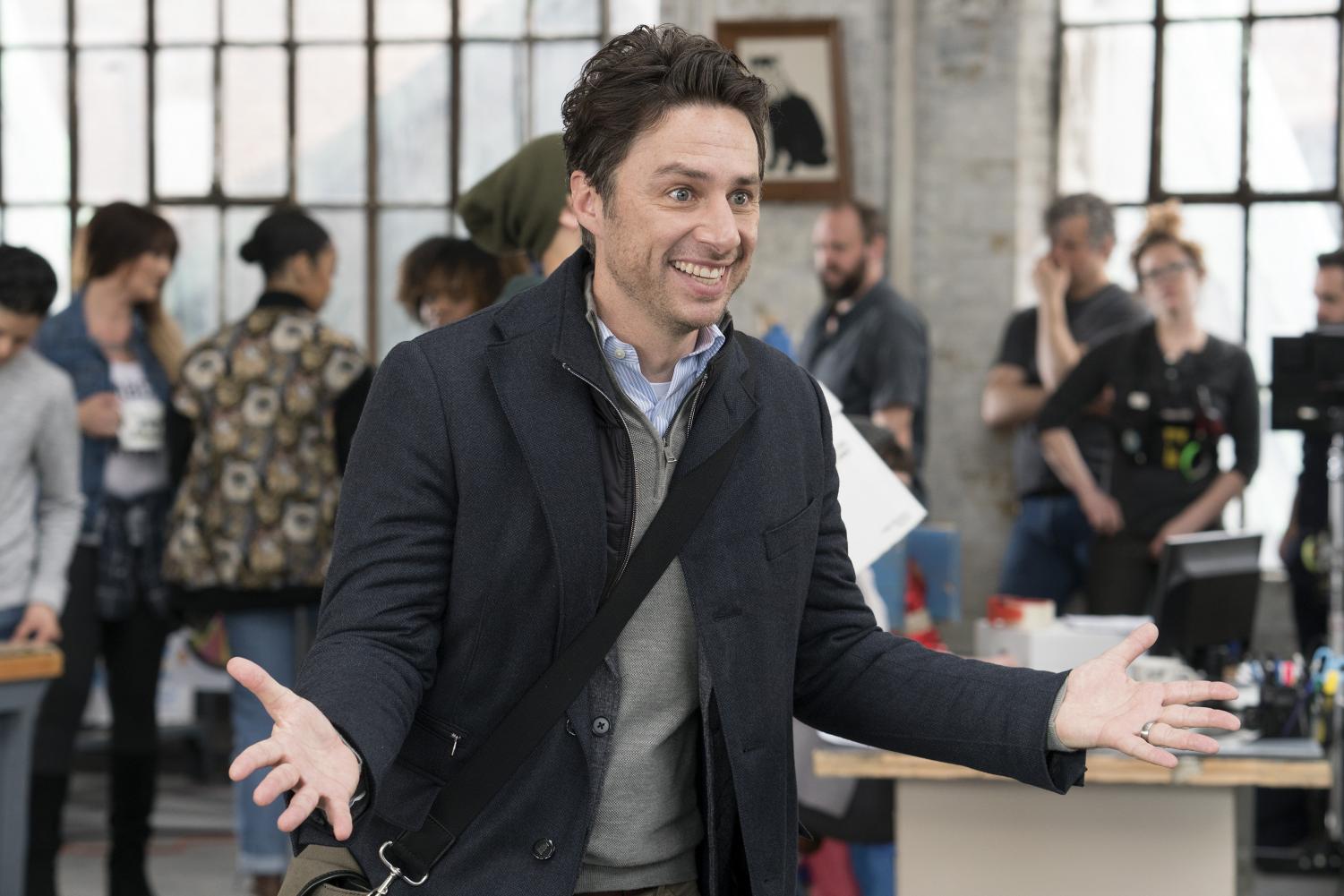 Zach Braff. The former star of “Scrubs” will return to television in his new sitcom, “Alex, Inc.” (Elizabeth Fischer/ABC)

Zach Braff. The former star of “Scrubs” will return to television in his new sitcom, “Alex, Inc.”

Zach Braff (Communication ’97) is one of Northwestern’s most notable alumni, made famous by portraying the hapless J.D. on the classic sitcom “Scrubs.” However, what they say is true: Stars, they’re just like us.

Braff was charming and humorous when interviewed over the phone, even accidentally dropping the call when he butt dialed his mother. His passion and excitement for his new project — a sitcom called “Alex, Inc.” — shone through.

After being conspicuously absent from the small screen for eight years, Braff will make his return March 28 on ABC when the series premieres. He stars as Alex Schuman, a radio journalist who quits his job to begin his own podcasting company. Hilarity ensues as he learns to juggle his budding business and life at home with his wife and two children.

Tiya Sircar, known for “The Good Place,” plays Braff’s wife on the show. Sircar said in a press release to Deadline Hollywood that she was excited to play a strong female role.

“I like that this character is not just a mom and a wife, although those are admirable jobs in themselves, but I like that she’s also a badass public defender,” Sircar said.

The show is inspired by a podcast called “StartUp” — created by Alex Blumberg of “This American Life” — that follows the stories of burgeoning businesses.

Braff said when he heard the idea of basing a series off the podcast, he was compelled by the unique subject matter within a family comedy and couldn’t resist the pull to get back into television. By that point, he said, he had begun to miss the comedic and social atmosphere of working on a television set.

Braff will be directing and executive producing the show, skills he said he honed at NU as a radio, television, film major.

Torn between majoring in theater or RTVF, Braff said he settled on RTVF because he wanted “to make movies more than anything.” He became involved in Studio 22 Productions — a student group that provides undergraduates with funding and support to produce their own films — and could be found working on student film sets almost every weekend.

Braff said he also wanted to take acting classes in the theatre department, but found this difficult to achieve as the classes filled up quickly. Luckily, one of his friends, Richie Keen (Communication ’96), convinced Communication Prof. David Downs to meet with Braff one-on-one to plead his case.

Downs said he was so impressed by Braff’s talents he let him into the class. It was the beginning of a relationship that would last through Braff’s NU career and beyond. Downs said he taught Braff in multiple classes, and even starred in one of Braff’s student films, despite having a general policy of not collaborating in students’ works.

“He was talented and he was smart, and he was interesting, and funny, and all those things, and then he had that quality where he could just get people to go along with his projects somehow,” he said.

Downs said he has stayed friends with Braff and even made a cameo in the 100th episode of “Scrubs,” which Braff directed.

Braff said Downs was a quintessential part of his NU experience.

“I credit so much of my accomplishments to David Downs,” Braff said. “He was one of the best teachers I ever had, probably the best teacher I ever had. … He just opened my world to another level of acting and understanding theater.”

In addition to working on film sets and theater, Braff was also part of the Phi Kappa Psi fraternity. He discovered the group as a freshman while living in Bobb Hall, which he said was the wrong dorm for him. He recounted times when he would go into the bathrooms and the urinals were pulled off the wall or there was vomit in the hallways. Braff said he wanted to be social, but Bobb wasn’t his scene.

However, Bobb was next to the quad where some of the Phi Psi brothers would play frisbee. It was from watching the brothers interact that Braff said he knew he wanted to be a part of their organization.

“They just looked more like my kind of folks; they just were arty and a little hippie and smoking tons of weed and playing frisbee, and I was like, ‘I want to be with those guys,’” Braff said. “When I joined Phi Psi I found a really great group of friends, and I just really enjoyed the fraternity experience.”

It was there that Braff met Keen — who introduced Braff to Downs — a fraternity brother who would remain a lifelong friend. Keen even directed an episode of “Alex, Inc.”

Ten episodes have been created for “Alex, Inc.” thus far, and Braff said he hopes “Scrubs” fans will enjoy the new sitcom’s similar style of humor.

“It’s kind of an in for people who grew up on ‘Scrubs’ and now have kids, they can appreciate the same humor,” Braff said. “Whereas ‘Scrubs’ is pretty risque and not something you would want to watch with a kid.”

Braff said he values the subject matter of his show since — unlike internet staples like viral videos and tweets — podcasts embrace a long-form style. He said he appreciated how people follow podcasts or will listen to them over a few car rides, in a similar manner to how people take the time to read a good book.

Storytelling has always been the prime objective for Braff as a filmmaker, he said. With all of its humor and heart, Braff said, “Alex, Inc.” is, first and foremost, a great story which he thinks will make the show a success.

“It all comes down to a good story,” he said. “It can be a small story, it can be a short film — like one would make at Northwestern — or it can be the arc of a comedy, like a show on ABC. It doesn’t matter what your budget is, if you have a great story that keeps people and they want to know more, that’s what matters most.”

Showing his purple pride, Braff ended the conversation like any true Northwestern student.