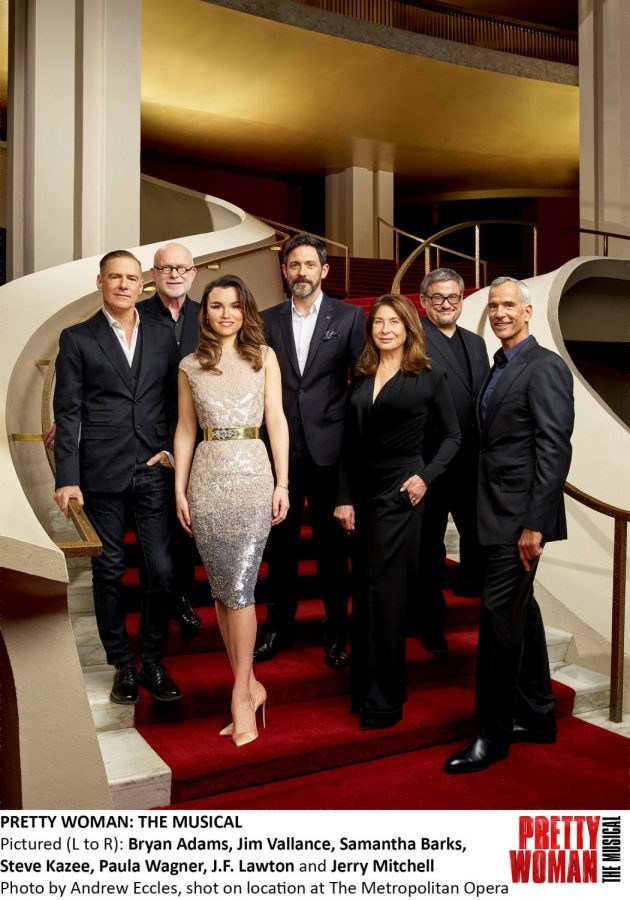 Cast and creative from “Pretty Woman: The Musical.” Samantha Barks and Steve Kazee star as Vivian and Edward.

If you’re trying to take a movie-musical to Broadway, you want Jerry Mitchell on your team.

The star director and choreographer has helped films like “Hairspray,” “Kinky Boots” and “Legally Blonde” make their way from the silver screen to the Great White Way. His newest endeavor: “Pretty Woman: The Musical,” is coming to Chicago this month to have its pre-Broadway tryout at the Oriental Theatre, from March 13 to April 15.

A modern Cinderella story that tells the story of a prostitute with a heart of gold who falls for a lonely, wealthy businessman, Northwestern alum Garry Marshall’s “Pretty Woman” is one of the most iconic movies of the 1990’s. Mitchell faces a challenge in adapting “Pretty Woman” for the stage, as fans of the movie will be coming to the theater with expectations of what it should look like. American Music Theatre Project associate artistic director Ryan Cunningham noted the importance of not just “putting the movie onstage with songs stuck in,” but rather subtly re-inventing the presentation of the story.

“There is a challenge for the creative team to deliver on what people are expecting … while also delivering something new enough that you want to go and say, ‘It’s worth me not just watching it on Netflix,’” he said.

Cunningham cited the stage version of “The Lion King” as a prime example of the wild success that can be achieved when creators get this formula right. While the plot of the stage show follows that of the movie, the artistic presentation is starkly different from the animation. The result: “The Lion King” stage show has grossed more than all new “Star Wars” movies combined.

With Mitchell at the helm, Cunningham has no qualms about “Pretty Woman” pulling this off and being a smash.

“Jerry is a master storyteller, and he’s very good at getting to the essence of what the show is all about. Frequently … the center of gravity thematically is different than what the film is,” he said.

One of the new centers of gravity Mitchell wants to highlight is Vivian finding her own strength, which he felt was important in light of the #MeToo movement. He said he was always compelled by the scene during which Vivian tells Edward she “wants the fairytale,” even adding a preceding musical number where Vivian sings about how much she has changed and can’t go back to the life she led before.

“She was a strong woman and has learned so much about herself in that week,” Mitchell said. “(In that scene) she’s finally learned her value and was able to say ‘no’ to a man that had a lot of money and a lot of power.”

In addition to enhancing this scene, the stage show will have Vivian, not Edward, saving herself from Stuckey’s attempted rape.

Given the serious topics that the show deals with, Mitchell and the creative team had to be careful and purposeful about where and how to insert song and dance into the story.

“Producers are always telling me ‘More dance, more dance!’” Mitchell said. “And I’m like, ‘Chill out, there will be plenty of dancing. It just has to come from an organic place.’”

One of the ways the show achieves this is by turning close-up moments in the movie into musical numbers in the show that explore the character’s inner monologue. A favorite of Mitchell’s is the musical’s re-imagining of the opera scene, which opens with “La Traviata,” then seamlessly flows from Edward singing about his love for Vivian as he watches her, to their first dance at the opera gala, to their first time making love.

Samantha Barks, who plays Vivian, said it is these kinds of revealing, intimate monologues between a character and the audience that makes her love musicals, as “it’s a joy to get to crack open that window to the soul.”

80’s pop star Bryan Adams was tapped to write the music for the show. While this is his first musical, Adams has composed movie scores in the past. J.F. Lawton, who wrote and adapted the “Pretty Woman” screenplay, credited Adams’ experience in both writing pop hits and soundtracks that advance a show’s plot in creating a memorable score for “Pretty Woman.”

“They’re songs that the minute you hear them you think, ‘Oh, that could be on the radio tomorrow,’” he said.

One of the songs Lawton said he is most excited about is “Rodeo Drive,” which is sung by Kit as Vivian explores the eponymous shopping district for the first time. Broadway star Orfeh, who plays Kit, was hand-picked for the show, as Mitchell felt she was the only person who could do the number justice. Orfeh, best known for playing Paulette in “Legally Blonde,” is famous for her showstoppers, and Lawton said this is no exception.

Barks and her co-star Steve Kazee, who plays Edward, have what are likely the toughest parts to play in the musical as they portray the characters iconically originated by Julia Roberts and Richard Gere.

Northwestern alum Kathleen Marshall, daughter of Garry, thinks the two are up to the task, saying she was relieved when they were both cast. Kathleen has overseen the production in the stead of her father, who was working on adapting the musical until his death in 2016.

Kazee was the leading man for the hit musical “Once,” and said he’s used his experience with that “quiet musical” to convey the subtle emotions and nuanced chemistry in “Pretty Woman” to a 2,300-seat audience.

“If you just tell the story in an honest way, that kind of power has the ability to reach the back wall of the theater,” he said.

Barks, for her part, is no stranger to playing strong women after making her film debut reprising the role of Éponine in the movie version of “Les Misérables.” She said she was able to connect to Vivian finding her own voice and self-worth and realizing that she is “worth the fairy tale.”

Equally compelling for Barks was the strength Vivian showed in her relationship with Edward, noting that the two are equals who help each other with their weaknesses.

“It’s all in the line, ‘She rescues him right back,’” she said. “It is a Cinderella story, but it’s not her as a damsel in distress. … He’s lost, she’s lost, they find each other and give each other this amazing, eye-opening experience of being in love.”