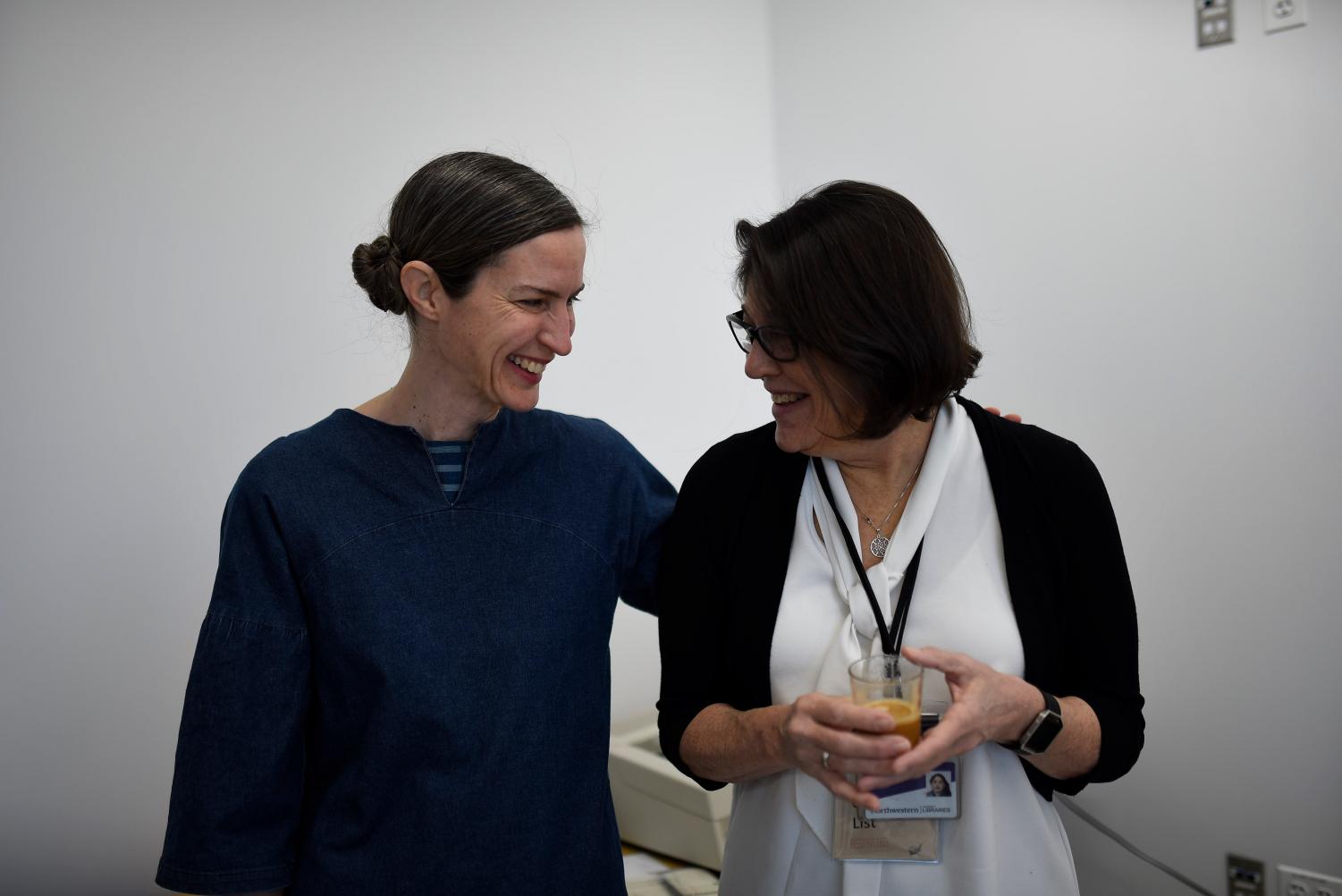 Artist in Residence Jen Bervin at her workshop. Bervin has endeavored to promote interdisciplinary artwork into her residency. (Source: Sean Su)

Artist in Residence Jen Bervin at her workshop. Bervin has endeavored to promote interdisciplinary artwork into her residency.

Still smiling after beginning her 9 a.m. workshop Saturday, Jen Bervin stood in front of participants at the interdisciplinary art workshop she was leading in University Library. She instructed the group to each take one of the various art pieces around the lounge, feel it and write something about it.

Bervin, an Artist in Residence at the Alice Kaplan Institute for the Humanities, has made a career out of experiments. Her latest: the “Read with the Spine” workshop, co-developed by Bervin and Block Museum of Art curator Susy Bielak.

The workshop was open to faculty and students, and marked a major point in Bervin’s residency. Throughout the quarter, Bervin and Bielak compiled materials from library archives and special collections for workshop participants to engage with. Activities ranged from studying concrete poetry collections to writing narration for archival footage of a building’s demolition.

“I really admire Jen’s work and her approach to the environment through engagement with materials and archives,” said Jayme Collins, a third-year Ph.D student studying under Bervin, “particularly through archives that have constituted women’s work, like textiles.”

Bielak first invited Bervin to Northwestern after one of her pieces, “Silk Poems,” a longform poem both published as a book and displayed as a liquified silk biosensor, caught the curator’s attention last spring.

The Block hosted four visiting artists last year in partnership with the McCormick School of Engineering as part of an initiative to explore the connection between art and engineering. Of all the artists, Bervin particularly impressed Bielak.

“During Jen’s visit, the care and sensitivity … and broadened vision I saw in meetings she and I were having were both fun and deeply philosophical,” Bielak said. “As a curator, I saw clearly how wonderful it would be to have her at Northwestern and the kind of value she’d bring here.”

Bervin’s residency is, in itself, experimental. After Bervin’s visit to campus, Bielak applied to the Alice Kaplan Institute for the Humanities’ Artist-in-Residence program, requesting that the Block host the artist for the residency. When the Kaplan Institute agreed to do so, it was the first time the two institutions collaborated on such a residency.

In addition to workshops and classes, the artist has also spent her time at Northwestern finishing her latest project, a hand-sewn silver sequin model of the Mississippi River called “River.” The piece has been in the works for 12 years, and is set to display at the Des Moines Art Center on Oct. 18.

For Bervin, this artwork is not merely an experiment, but rather a piece with personal significance from her childhood. After her father’s death at age 33, his ashes were spread into the Mississippi River. Despite the inspiration for the piece, she called it “the opposite of a memorial.”

“It’s about that moment when grief turns to joy,” Bervin said. “I don’t have a word for that, and I don’t think our culture has a word for that. Grief is unmapped in the American consciousness.”

Bervin further strived to implement interdisciplinary artwork into her residency, which she felt fit well with the student culture at Northwestern. Bervin has taught similar workshops at other institutions, such as Harvard, but said she hasn’t seen the same framework for combining various disciplines that is in place at Northwestern.

Through this approach, Bervin hopes to soften the harsh distinctions between artists and scientists. In her course titled “Advanced Materials,” offered through McCormick and the Weinberg College of Arts and Science’s Department of Art Theory and Practice, students use engineering research as subject matter for the art they create.

Bervin said the partnership between the Block and the Kaplan Institute has allowed her to develop relationships with students and faculty in the process of co-developing her workshop. She also said she has been able to meet with archivists and curators to bring her vision to life.

“There were a lot of moving parts,” Bervin said, “and I feel like at every turn we were met with grace and intelligence and generosity of spirit that moves something like a workshop from interesting to compelling.”

When workshop participants finished reading their texts about the objects they were assigned, Bervin was still smiling. She revealed that three of the art pieces were actually fragments of The Rock, an iconic campus landmark. Bervin relishes this intimate, tactile interaction with art.

“It’s a beautiful thing,” she said, “to see an object caressed and explored.”