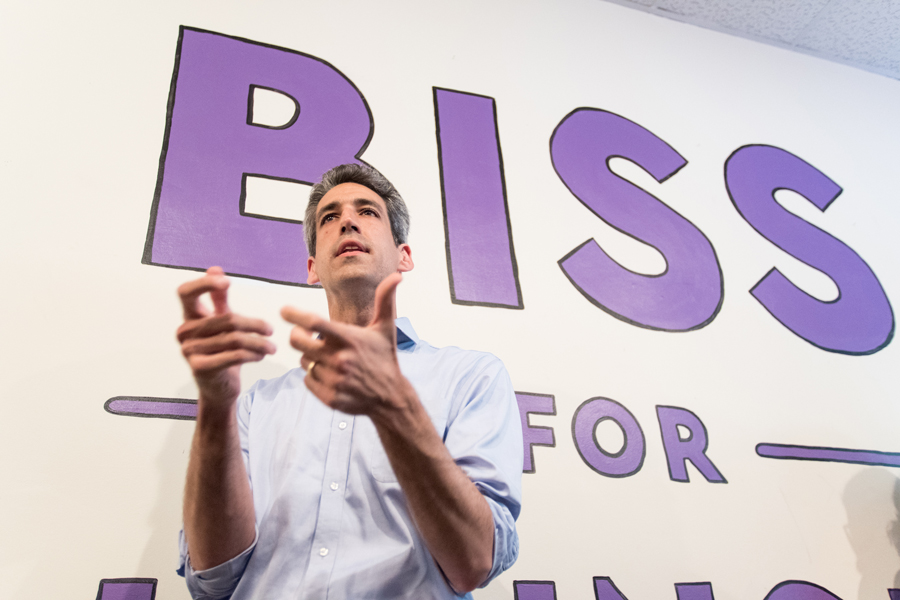 After activism, legislating, Evanston’s Daniel Biss hopes to take next step as governor

State Sen. Daniel Biss (D-Evanston) came to Chicago in 2002 when he accepted a job as a mathematics professor at the University of Chicago. At first, he said, it was his “dream job,” and he didn’t want to do anything else.

At some point, Biss changed his mind. Sixteen years after starting at UChicago, Biss is running for governor, touting his record as a progressive in the General Assembly in the race against main opponents J.B. Pritzker and Chris Kennedy. The campaign is heating up ahead of the March 20 Democratic Primary, with ads from the Pritzker camp recently taking a turn to bash Biss’ record.

Biss first campaigned for an elected office on the North Shore 2008, after being inspired to run by the “consequences” the Iraq War had on the U.S.

“I remember seeing pictures come back from (Iraq) where the American military was engaged in unthinkable activity,” Biss told The Daily. “That was being done in our name, and that was a public representation of the values that our country is projecting. I just felt like … I couldn’t do that, I couldn’t just sit back and allow that to happen.”

Biss said prior to his first campaign, he organized anti-war efforts on the University of Chicago campus and also worked on campaigns he thought had potential to be “transformational” for the state and country.

He said he began his dive into politics by simply knocking on doors to talk to people what they planned to do in the ballot box.

“I realized that if you could organize enough people together to push for the same vision, you could actually change the world,” Biss said. “And to me that was it. That was what I realized I want to do, to find a place to organize people, to make change.”

In his first run for state representative of the 17th district, which includes some of west Evanston, in 2008, Biss lost to Republican Elizabeth Coulson in the general election by 2.96 percent of the vote. In 2010, he ran for state representative again and was elected, this time with a positive margin of 4,038 votes and two years after that he was elected to the Senate for the 9th district, which largely encompasses Evanston.

Alison Leipsiger, who ran Biss’s district office in Skokie for his years in the legislature, said she and Biss hit it off right away when they met at a political luncheon in 2010.

“We had a good rapport with one another,” Leipsiger said.

Although Leipsiger no longer works for Biss, she occasionally volunteers on his gubernatorial campaign. As one of his only staffers from 2011 to 2015, she said he’s a legislator and public servant who understands the impacts of the legislation he votes on.

She said Biss has always been interested in fixing “bigger issues,” and that he does not shy away from difficulties.

“He’s a very kind of slow-and-steady-wins-the-race type of guy,” Leipsiger said. “He sees the big picture really well, and he is also extremely patient in how he addresses those big issues.”

Biss launched his campaign for governor in March 2017 on a platform of creating a tax system that supports the working class, enforcing educational equality, providing universal health care and taking “big money” out of government, according to his campaign website.

Leipsiger said she believed campaigning is not about “checking off boxes” for Biss, but about truly understanding the communities he is visiting. She added that when she worked for him, she noticed he would take the time to sit down with his constituents and listen to their concerns.

“A lot of legislators are quick to let their staff just handle it, and they’re not as involved as they could be,” Leipsiger said. “But his willingness to sit with people from his district in need was really moving oftentimes, and his commitment to them as individuals really speaks to the kind of person he is.”

Northwestern philosophy Prof. Jennifer Lackey said she first met Biss in 2016 when she invited him to speak at a class she teaches on mass incarceration at Stateville Correctional Center in Crest Hill, Illinois because she thought his views on criminal justice were progressive.

Lackey said she kept in touch with Biss and he returned to the class in January during his gubernatorial campaign. She added that in Illinois, incarcerated people lose the right to vote.

“It was certainly not a political stop … because none of (the inmates) can actually even vote in the race,” Lackey said. “(Biss) just came to hear their perspective.”

She said the first time Biss visited her class, the prison management wanted to give him a security detail and “VIP treatment.” Instead, she said, Biss was humble: He took his shoes off, put his ID in a locker and just wanted to have an “honest, candid” conversation with the inmates in Lackey’s class, she said.

Lackey said Biss is running as the “middle class governor,” and that his experiences resonate with concerns Illinois citizens have.

Biss said that while he doesn’t plan on losing the governor seat, if he does end up unsuccessful, he will find another way to contribute meaningfully to the political system. For now, he’s choosing to focus on strengthening his campaign.

“This campaign is about changing what’s possible. It’s about understanding why we haven’t built the government we deserve, but also understanding if we’re able to organize people to demand change we could do better,” Biss said. “It’s a campaign about saying if we know that something’s right, let’s figure out what we have to change to make it possible.”