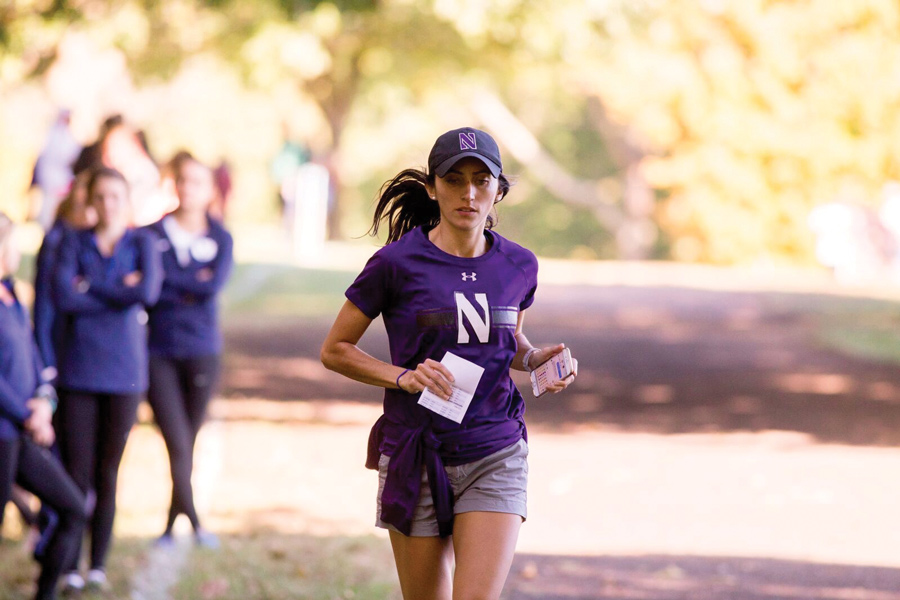 First, she was tabbed to lead the Northwestern cross country team, returning to the program where she first began her coaching career. Then, she got engaged.

Austin Brobst had already bought a ring and was planning to propose sometime in the near future. After the first bit of news, July 2 provided the perfect opportunity.

“I had initially planned to ask her later,” Brobst said. “And then she was offered the position. … I don’t remember the exact specifics of how the question came up, but it was basically something to the extent of, ‘Do you want to get married?’ and she was like ‘You’re joking.’”

After spending five years as an assistant for the University of New Mexico, Haynes returned to the Midwest with her fiance to lead the NU program and begin the next chapter in her life.

Raised in Phillips, Wisconsin, Haynes got her first taste of Big Ten cross country close to home as a member of the 2006 Wisconsin team that finished fourth at NCAA Championships.

A year later, she earned All-American honors in the 3000-meter steeplechase and met the Olympic Trials qualifying standard. Haynes spent 2008 training for the Olympic Trials and, afterward, arrived in Evanston to get her master’s in sports administration at Northwestern.

While getting her master’s, Haynes reached out to then-head coach April Likhite to express her interest in helping out with the cross country team. The timing was perfect. Likhite was in search of an assistant coach, and she soon hired Haynes.

Haynes originally aimed for a career in marketing and public relations, and even applied for several jobs. She never expected to enjoy coaching so much.

“I realized, when coaching, I never really disliked any of my days,” Haynes said. “I thought, ‘that’s a nice career path and my boss has a pretty good gig. I should probably keep coaching.’”

Haynes decided to pursue the coaching avenue and was hired at New Mexico, where she would spend five years with the Lobos’ cross country and track and field programs, eventually becoming associate head coach. During her tenure, the Lobos consistently competed for national championships. In her final season, they placed third at the NCAA Division I Women’s Cross Country Championships.

It was at New Mexico that Haynes met Brobst, a graduate assistant for the track and field team, who would later become the team’s recruiting coordinator and assistant coach for horizontal jumps and short sprints.

When Likhite decided to retire in 2015, Haynes reached out to her former colleague to inquire about the open position.

“I reached out to her and I said ‘April, do you think that this is a position that would be the right fit for me?’” Haynes said.

Likhite gave her blessing, and after a long interview process, Haynes was invited to return to NU, now at the helm.

She and Brobst moved to Evanston, and after six months as head recruiting coach of the National Collegiate Scouting Association, he was hired to join Haynes’ staff.

Jim Stintzi coached Haynes for three years at Wisconsin and makes an effort to talk with her frequently. He now coaches at Charleston Southern in South Carolina, but despite the distance, the cross country veteran is well aware of Haynes’ success.

Stintzi said he enjoyed his time coaching her and emphasized that she was able to have fun but also work hard, and said her coaching style reflects her racing style.

“She was a really tough, gutsy runner,” Stintzi said. “She sort of approaches coaching the way she raced, which is no nonsense, and I think she values toughness in her athletes and doing things the right way. I think that is why she is going to be and has been and will continue to be a success.”

Senior Isabel Seidel was a sophomore when Haynes was hired. Seidel said the Wildcats were originally intimated by Haynes’ training, with the new coach amping up the mileage and intensity of workouts. But as time went on, she said they realized the workouts were doable and better for the team.

“I didn’t totally trust in the training of our old coach,” Seidel said, “and I just feel like I completely trust in Haynes’ training and that I have responded to it very well.”

Seidel is not the only one who has taken to Haynes’ approach. This season, the Cats earned their highest regional ranking in four years, with sophomore Aubrey Roberts leading the pack and individually qualifying for NCAA Championships in Louisville, Kentucky.

As a freshman, Roberts became the first NU runner to clinch a bid to NCAA Championships since 2010. She said the insight Haynes has as a former Big Ten runner is invaluable.

“I realized during the recruiting process that she really cares about you as an individual and as an athlete,” Roberts said.

Haynes’ background as a Big Ten athlete has allowed her to apply her past experiences to her coaching, Roberts said. Haynes added that she most emphasizes consistent communication with her athletes.

“The communication component is huge,” Haynes said. “We have recruited a great group of women, and the women that are here were wanting better communication. So I think it has really worked out well in our favor and has been sort of this snowball that has been a really cohesive environment for that.”

Roberts, one of three members of Haynes’ first recruiting class, spoke highly of the communication between Haynes, Brobst and the team.

The Cats, who are 17 deep, are a smaller team compared to other Division I programs, which Haynes said she prefers to maintain communication and consistency.

She added that it is imperative that no athlete feels like they are “on the fray” and unaware of what is going on. She said she and Brobst are constantly available for the runners and take pride in doing so.

“It is really good for me to stay in contact with the women and really understand what they are going through and make adjustments so they can stay healthy,” Haynes said.

Haynes also stresses consistency to maintain her team’s health. She laid out diet, sleep and workout routines for her team, which Seidel said helps the Cats track incremental improvements, on both an individual and team level.

Haynes said she understands the nuances of the sport because she lived it not too long ago. Her insight is comprehensive and holistic because of her past.

By working out daily, whether that be in a forest preserve in Libertyville or in the weight room, she said the team is able to establish a culture focused on growth and ultimately winning.

“Running is not necessarily a technical sport,” Haynes said. “It is a one foot in front of the other sport and how you do that best is by doing it often and consistently, and that consistency is translated into our performances. I do not ask them to do anything crazy, but I do ask them to do it daily.”

To say Haynes has big plans for the program would be an understatement. Much like New Mexico, whose first-place finish at NCAA Championships on Saturday marked its second championship in three years, Haynes aims to lead NU to a national platform.

She recognizes NU still has a lot of work to do but said it is progressing toward top of the Big Ten, her intended destination. Once they reach that mark, Haynes is confident the Cats will be nationally prominent.

To Haynes, the growth of the team is relatively formulaic, so long as it coincides with NU’s academics — something she recognizes the Cats must be, and have been, on top of. When recruiting, she said she looks for runners who understand the importance of athletics and academics, but most of all, their future success.

Beyond putting academics at the forefront, Haynes said there are certain things the team must do to best equip itself for that success.

“This is our goal, this is what we are going to accomplish and this is how we are going to do it,” Haynes said. “We do it by consistency, by preparedness, by a good attitude, all the things that great winning programs do.”