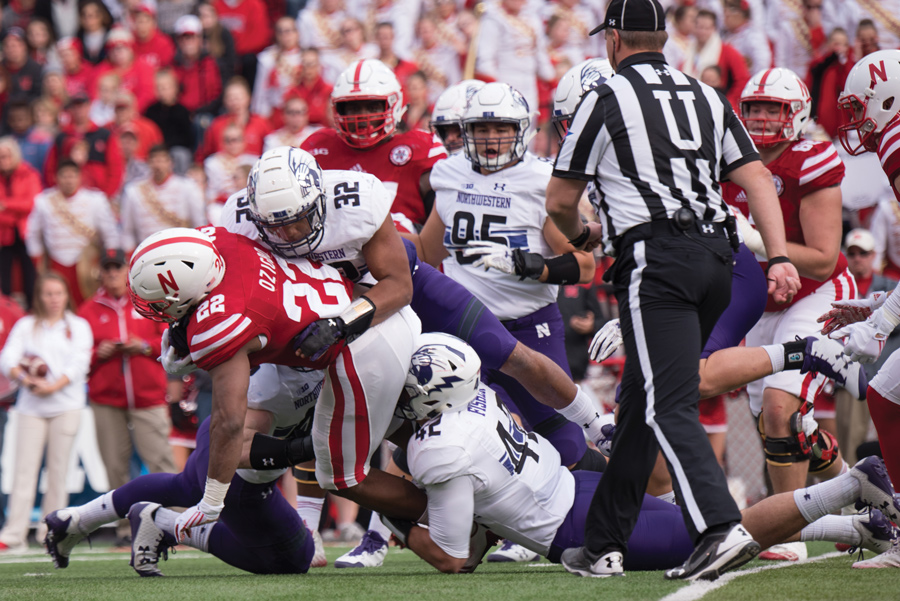 Northwestern faced an uphill test Oct. 28 against Michigan State. The Spartans had won four straight games entering the contest in Evanston and stood at No. 16 in the country. The Wildcats’ two previous games against ranked teams had ended in ugly fashion.

Then, a pair of Cats linebackers had career days.

Redshirt freshman Paddy Fisher amassed a career-high 19 tackles and junior Nate Hall made a game-winning interception in the end zone in triple overtime, leading NU to an upset and second straight overtime win. The two performances also epitomized the duo’s rise, with Fisher and Hall announcing their presence as defensive standouts on a team that has now won five consecutive games.

Fisher has been a consistent stat-stuffer, leading the Cats with 95 tackles. Hall, also a strong tackler, has made himself known by making big plays at big times.

The Cats entered spring practice with gaping holes at linebacker. Anthony Walker had departed for the NFL, the first player ever to leave school early under coach Pat Fitzgerald. Walker took with him 33 starts — including all 13 at middle linebacker last season — and several All-American honors from 2015.

Gone to graduation were Jaylen Prater, who started the first eight games of 2016, and Joseph Jones, who made five starts himself.

That left NU with a pair of part-time starters on the outside — Hall and senior Brett Walsh — and a large gap inside. Then Fisher announced his presence, edging sophomore Nathan Fox to earn a starting spot in the season opener.

Even before Fisher made his first start, Hall said he saw something special in his linebacking partner.

“You could see the instincts he had,” Hall said. “You just go back to what you were like as a freshman, and you could see how far along he was.”

Some preseason chatter revolved around how NU would mask an assumed weakness at linebacker. But after just four games, when Fitzgerald was asked which unit had made the most progress since training camp, he had high praise for the middle of the defense.

“The linebackers have probably played better than I thought they would going into the start of the season,” Fitzgerald said. “Especially Paddy Fisher. He has played really outstanding football for us.”

Fitzgerald said he thinks the Cats got lucky when they landed Fisher.

Despite strong play in high school, Fisher was not a highly sought-after recruit. He had offers from only a small handful of power conference schools, and he was not among the top 50 inside linebackers in his class, according to 247Sports.

“I was shocked that he wasn’t being more heavily recruited,” Fitzgerald said. “I thought from a size, speed, production (standpoint), wow. He jumped off the tape.”

When the three-star prospect got to Evanston, coaches had an inkling he would be something special. After prepping at legendary Katy High School in Texas, Fisher arrived ready for college football, Hankwitz said.

The staff’s assumptions were quickly validated.

In his second career game, an ugly blowout loss at Duke, Fisher was a bright spot with 18 tackles. Then against Michigan State, he reset his career high with 19 stops — 14 of which were solo tackles. The freshman forced fumbles on consecutive plays with the Spartans in the red zone to keep the visitors off the board.

Fisher has 95 tackles to lead NU by a wide margin; only Josey Jewell of Iowa has more in the Big Ten. And Fitzgerald said he believes the similarities between Fisher and Jewell, an All-American, extend to their playing styles.

“They’re generational linebackers. (Fisher) easily could have played (decades ago) because of his size,” Fitzgerald said. “You think about a couple of the plays that Paddy has made outside of the numbers, even the fumble caused (against the Spartans), that was a big play in the game. That’s a big (245)-pound guy that can run sideline to sideline. It’s pretty impressive.”

Fisher has big shoes to fill. He follows Walker, one of the best defensive players in program history, and plays the same position Fitzgerald did two decades ago.

Though Fitzgerald won two Nagurski awards as the best defensive player in college football and comparisons between the two are inevitable, the soft-spoken Fisher seems to not mind. He said he loves playing for Fitzgerald.

“I wouldn’t want to be anywhere else,” Fisher said before praising his coach. “He is the man. He has been in the same shoes as I am, so he sheds a lot of light and wisdom on me.”

Hall didn’t begin his career as the loud playmaker Fisher is.

He finished fifth on the team in tackles his freshman season, then moved up to third last year as a sophomore. But he often took a backseat to Prater when the graduated senior was healthy, and he was often overshadowed by Walker.

Now, it may be Hall whose plays are most noticed. He leads the Cats in tackles for loss, and in “third down stops,” linebackers coach Randy Bates said, a metric used by NU coaches to determine who makes tackles or defends passes to force opponents off the field.

“Nate has played as well as I’ve ever seen him play. He’s making critical plays at critical times,” Bates said. “He can cover, he can run, he can play in space.”

Hall, for his part, said he started the season slowly. But after the Cats’ bye week, three games into the year, things began to click.

That was clear Oct. 14 at Maryland, where he recorded 11 tackles and 3.5 for loss, both career highs. The standout performance came a week after his first career sack, only one of several milestones this season for the junior.

“I’ve been better getting off of blocks and understanding the defense and pass coverage,” Hall said. “It’s just allowed me to have fun and play fast.”

Hall then took his game to new heights against Michigan State. He missed much of the first half after suffering a gruesome left hand injury in which two fingers were bent so far backward that they broke skin.

He then returned with 30 stitches in his hand and played the entire second half. And in the third overtime, he picked off Spartans quarterback Brian Lewerke’s heave — his first-ever interception — to send NU to victory and students rushing the corner of the end zone.

“I’m really proud of Nate’s toughness. … That was a pretty gruesome injury that he had,” Fitzgerald said. “To see the way he went out and played was awesome.”

Hall now sits second on the team in solo and total tackles — though he trails Fisher by nearly 40 in the latter category.

Despite their impressive numbers, Fitzgerald said he expects even better play from his top linebackers. Fisher, in his first season of game action, “is still learning,” Fitzgerald said. Hall still needs to continue “coming on,” in the words of his coach.

With three more games this year and at least one more season remaining in their careers, Hall and Fisher will each have opportunities to take their play to even higher levels. Still, the first 10 games of the year have made for a pair of impressive campaigns.

“They’ve both made big plays for us,” Hankwitz said. “I’d like to see that continue.”