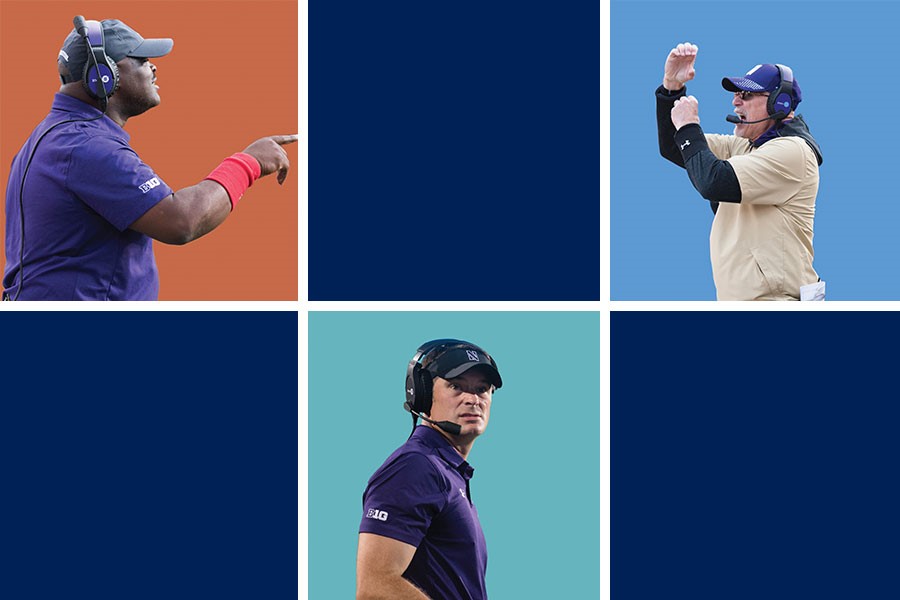 A sour mood enveloped Ryan Field in the aftermath of Northwestern’s ugly homecoming loss to Penn State last month, the kind of game which the hosts could have played for days without matching the Nittany Lions’ 31 points.

At the postgame news conference, coach Pat Fitzgerald apologized for the disappointing performance. He decried the “one-man breakdowns” and “self-inflicted wounds” that had torpedoed his team’s offense too frequently in the Wildcats’ 2-3 start to the season.

But when asked about the prospect of change to the offensive coaching staff, Fitzgerald shot down the suggestion.

“Any time you go out and don’t have a few weeks of good performance on either side of the ball, any of those types of feelings to have as a fan are absolutely fair,” Fitzgerald said. “I look at things holistically, and I always have and always will.”

That holistic approach has put the Cats in a class of their own — the 2017 season marked the seventh straight year NU’s staff, from Fitzgerald to the coordinators and position coaches, has stayed unchanged, the longest such streak in the country.

The Cats’ nine assistants have taken different paths to their positions in Evanston. Some were outside hires; others were on staff before Fitzgerald assumed the program’s head job in 2006. Their tenures range from seven years for wide receivers coach Dennis Springer to 25 for defensive backs coach Jerry Brown.

In a sport notorious for its coaching turnover, NU’s staff has been a model of stability. And despite calls for change over the years from some corners of the team’s fanbase, a shake-up anytime soon seems unlikely under Fitzgerald’s steady hand.

The linchpin of the Cats’ coaching continuity is their leader. Fitzgerald, who signed a 10-year extension in April to coach NU through 2026, appears to have earned the admiration and loyalty of his assistants through their many years together.

Defensive coordinator Mike Hankwitz, whose 40-plus year career has taken him all over the country, spoke highly of Fitzgerald, who hired him a decade ago.

“I love the way he coaches with our players,” Hankwitz said. “He’s youthful, yet he’s got a lot of wisdom, and I really appreciate that.”

By numerous accounts, Fitzgerald has built a comfortable environment for his coaches in Evanston that has proven hard to leave. Multiple assistants said Fitzgerald understands the importance of work-life balance, an idea that could easily take a back seat in the high-intensity world of football coaching.

Despite the pressure that surrounds the profession, offensive line coach Adam Cushing said Fitzgerald encourages his staff to focus away from the field when necessary.

“He’s a demanding coach that wants to see everyone, not just the players but in his staff, do their best, but also stresses family,” Cushing said. “When you have that type of leader … that you know is going to support you, is going to look out not for just the one aspect of football, but look at the players and the coaches as a whole person, coaches don’t want to leave that type of situation.”

Fitzgerald’s foundation has given his staff the chance to gel and get on the same page. NU’s position coaches have had ample time to learn the schemes of the Cats’ coordinators, Hankwitz and offensive coordinator Mick McCall. With that knowledge comes more ability to contribute to the weekly game plan, and Hankwitz said every assistant on his side of the ball has a voice in that process.

“People on this staff have had opportunities to go other places and that hasn’t happened,” McCall said. “There’s a reason behind it, and it’s the people that you work for.”

For NU’s players, all of whom have spent their entire careers in Evanston playing for the same coaches, familiarity with the staff can be a boon both on and off the field.

“You know their expectations, you know what they want from you and what areas they want to see you improve,” senior safety Kyle Queiro said. “There’s things that (Brown) can entrust with me or say to me that maybe a coach who I’ve only had for a year may not be able to notice.”

After years under the Brown’s tutelage, Queiro joked that he and fellow senior safety Godwin Igwebuike could run defensive back meetings if their coach needed a day off. Away from football, Garrett Dickerson said he can trust superbacks coach Bob Heffner with issues in his personal life thanks to a relationship built over the senior’s four-year career.

To Cushing, that comfort level between the Cats’ players and coaches is afforded by the team’s coaching stability.

“I’ve recruited offensive linemen that I’ve gotten to watch graduate,” Cushing said. “That gives (players) … a level of trust that the person is going to have your back, that the coach is going to be there and is willing to coach you every single rep.”

The prospect of developing a bond with a position coach could be enticing to NU’s potential recruits. In recent years, the Cats have held their own in recruiting rankings despite lacking the prestige and resources of some of their power-conference peers.

“We’re truthful with kids. We say we can’t promise … that everybody here is going to be here throughout your four years,” MacPherson said. “But the best predictor of future behavior is past behavior.”

Today, that message resonates with Dickerson, who has developed into one of the Big Ten’s better pass catchers under a single position coach.

“Thinking back now, how influential it’s been to me,” Dickerson said, “I’ve definitely been very happy about it.”

NU’s seven seasons without a change in coaching staff are a testament to the team’s ability to hold onto coaches who could leave — and its willingness to stand by assistants rather than let them go.

On one hand, Fitzgerald said members of his staff have had the opportunity to advance their careers elsewhere, only to be retained by the program. The last coach to leave the Cats was Kevin Johns, hired as the passing game coordinator at Indiana in 2011.

MacPherson could be the next NU assistant to be poached away for a promotion. He interviewed for the open head coach position at Western Michigan after last season, but for now, he remains in Evanston. MacPherson said the opportunity to interview with the Mustangs was “a product of the success that we’ve had here.”

Relative to the program’s history, the Cats’ staff has in fact been successful. Over the past seven seasons, NU reached bowl eligibility five times and notched 10 wins in 2012 and 2015.

In general, much of the Cats’ inconsistency in recent seasons has come on the offensive side, leading to pressure from fans to move on from McCall, the unit’s coordinator, as well as assistants like Cushing and Springer. Fitzgerald has responded with unwavering support for his staff, brushing off worries of complacency.

Now riding a four-game winning streak after a tough start to the season, NU has temporarily quieted the loudest coaching questions. The signs point to another year of continuity on college football’s most stable staff.

“Everybody has their own beliefs about it,” Cushing said of the team’s coaching consistency. “We haven’t had the success at as high of a level as we’d wanted, but … we’ve had two 10-win seasons, we’ve done a lot of really productive things, bunch of bowl games, and we’re looking to take that next step.”