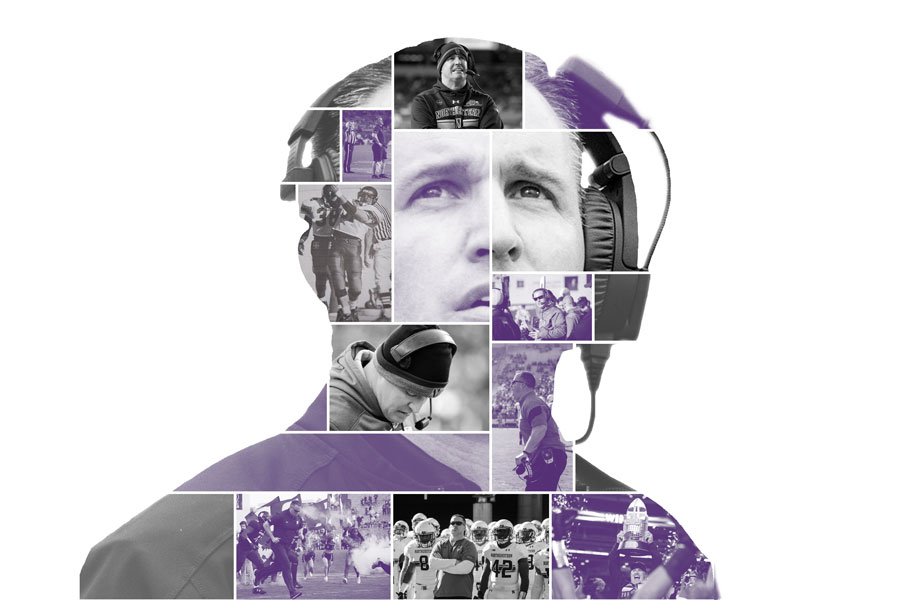 Before he stalked the sidelines each fall weekend and students placed bets on whether he’d wear shorts, Fitzgerald was a leader on the field, spearheading the Wildcats’ 1995 campaign to the Rose Bowl. But even before that, he was just a lazy college kid.

“I don’t think I missed an opportunity to play video games, I think I slept through classes,” Fitzgerald said. “Like, the blueprint of what you should not do, I followed that. Even though I was educated not to, I just did not have my mindset in the right spot.”

Fitzgerald, now in his 12th season as head coach, first came up through the program in the mid-1990s. In 2006, he became the youngest FBS coach at the time at age 31. And just six months ago, the school awarded him a 10-year contract extension through 2026.

But Fitzgerald’s road to football coach was not without speed bumps. His early playing and coaching days were rife with indecisiveness, so much so that he considered resigning the head job in Evanston had he not found success in his third season at the helm in 2008.

Instead, NU rolled to a 9-4 record that season. The rest, as they say, is history: The Cats made bowls in the next four seasons, and Fitzgerald’s status as the face of NU athletics was soon etched in stone.

Upon his arrival in Evanston in 1993, Fitzgerald struggled to get into a routine. For his entire high school career, Fitzgerald set a personal goal of playing college football, and after achieving it, had trouble readjusting.

After Fitzgerald slacked off his first year-and-a-half in Evanston, both in classes and on the field, then-coach Gary Barnett sat him down in the spring of 1995. Barnett told him to get his act together or else he’d ride the bench in favor of freshmen.

Barnett said he couldn’t recall the exact details of the meeting, but that “during (Fitzgerald’s) sophomore year, you could see it was starting to click in, he intuitively knew things that other guys didn’t.” Barnett added, “He was being a pretty typical freshman … but he could be special if he decided to.”

Fitzgerald proceeded to win consecutive Bronko Nagurski Awards, given annually to the country’s top defensive player, his junior and senior years. The Cats’ Rose Bowl appearance came less than a year after his meeting with Barnett.

After graduation, Fitzgerald knew he wanted to eventually coach, but had a cup of coffee with the Dallas Cowboys first. The Cowboys cut him after the graduate assistant hiring deadline in 1997, so his coaching career began in earnest with Maryland in 1998.

For Fitzgerald, the head coaching job at NU was something he’d held out hope for but not something he expected. Fitzgerald took his first full-time assistant coaching job at Idaho in 2000 and the very next year, then-Cats coach Randy Walker hired him as the defensive backs coach. Things were looking up.

“(My wife), Stacy, and I talked about having the goal of getting back to Northwestern by the time we were 40,” Fitzgerald said. “Little did I know that it would happen about 18 months later.”

An athletic department spokesperson declined an interview request of Brown for this story on his behalf, and Brown has declined interview requests from The Daily for several years. But Fitzgerald said both recommended the other for the job.

“Obviously you could categorize this as my dream job, but taking over in the manner I did would be categorized as the worst circumstances I possibly could,” Fitzgerald said. “I didn’t say yes right away.”

Instead, Fitzgerald checked first with his wife and confirmed with the University that he would not serve on an interim basis. After some consideration, he signed on to head the program.

During Fitzgerald’s first season, the on-field product took a backseat to helping the Walker family and players through the tragedy, he said. C.J. Bachér, a sophomore quarterback at the time, said Fitzgerald emulated Walker in 2006.

“When Fitz took over in 2006, he was a clone of Walker, in the sense of his coaching style,” Bachér said. “Which I think was the right decision for him to make, being that (Walker’s passing) was so close to the start of the season.”

But as a new coach, he found himself struggling to delegate tasks to his assistants. Fitzgerald said he “micromanaged” in 2006 and 2007, trying to have a hand in everything and “operating like a position coach.”

His moment of reckoning came after the 2007 season. NU finished 6-6, bowl-eligible and two wins better than the year before, but missed the postseason due to lack of Big Ten bowl spots.

Fitzgerald took some time to “self-reflect” following 2007 in a similar manner to his 1995 meeting with Barnett. He once again “swallowed a pretty big humble pie pill” and recalled his conversation with then-athletic director Mark Murphy and then-University President Henry Bienen when they first hired him.

If he couldn’t “get this program going in the direction it needs to go in a timely manner,” Fitzgerald said he would step down.

“I told (Murphy and Bienen) that I get that I’m young, I get that I’ve never done this before, but I’m gonna lean on everybody I know to help me,” Fitzgerald said. “If this doesn’t work in a couple years, you won’t have to fire me. I’ll resign. I love this place too much. … I would just like to continue to be on staff, but it just means too much to me.”

Fitzgerald’s first task after 2007 was to find his own coordinators. He’d kept Walker’s offensive and defensive staff in his first two seasons to afford as much stability as possible, but wanted to bring in his own coaches in 2008.

He traveled to a coaching convention in Southern California for his search and interviewed dozens of candidates for the jobs. There, he met Bowling Green’s Mick McCall, a spread-offense engineer, and Wisconsin’s Mike Hankwitz, a defensive veteran with a nearly quarter-century track record.

The two have been the Cats’ coordinators ever since.

McCall wasn’t worried about taking orders from a coach more than 20 years his junior.

“It isn’t about the age, it’s about the vision and the delivery,” McCall said. “It’s all about the attitude and the character that you project.”

That 2008 season marked a sharp turnaround for NU. Bachér had a career year as a senior and senior running back Tyrell Sutton averaged almost 100 yards per game before a wrist injury ended his campaign. The defense, which had allowed 31 points per game in 2007, slashed that number to 20.2 in 2008.

NU hasn’t looked back. Fitzgerald has taken the Cats to seven bowl games, four more than any other coach in program history, and won two. In 2015, NU recorded 10 regular-season wins for the second time under Fitzgerald.

Looking back, McCall said when he took the Cats job he did not know about Fitzgerald’s consideration to resign. Regardless, McCall said, he wouldn’t entertain the thought of a program without his boss.

Fitzgerald has had similar impressions on recruits. Senior safety Godwin Igwebuike, NU’s best defensive player and a team captain, said Fitzgerald was one of the main reasons he came to Evanston.

“That’s wild, I can’t even imagine,” Igwebuike said. “I can’t really imagine (the program) without him. He’s been here forever.”