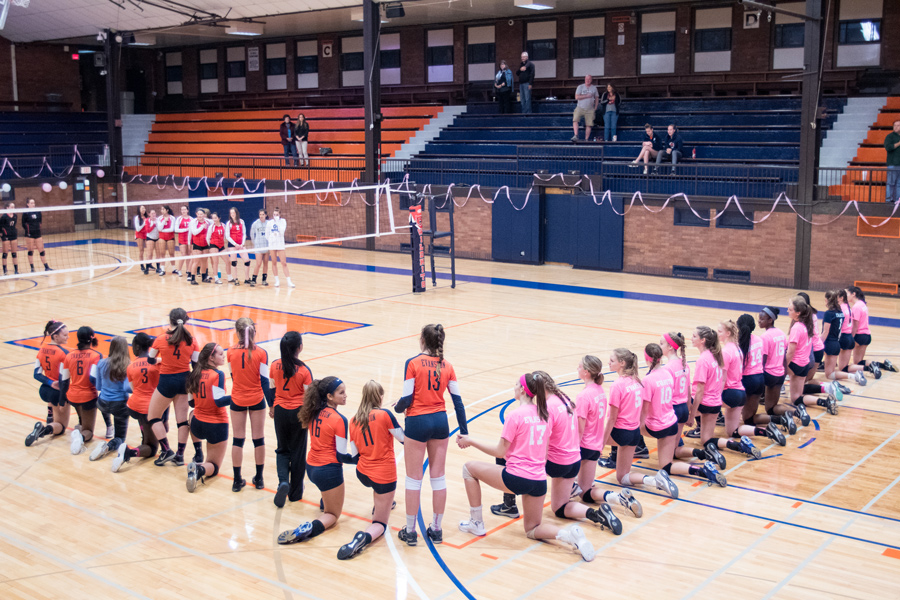 The Evanston Township High School girls varsity volleyball team kneels for the national anthem at an Oct. 11 home game in Beardsley Gym. Since then, other ETHS students followed in the team’s footsteps, including those on the boys varsity soccer team, football team and marching band. (Colin Boyle/Daily Senior Staffer)

The Evanston Township High School girls varsity volleyball team kneels for the national anthem at an Oct. 11 home game in Beardsley Gym. Since then, other ETHS students followed in the team’s footsteps, including those on the boys varsity soccer team, football team and marching band.

At the Sept. 26 game against New Trier High School, the ETHS student-athletes took a knee as the national anthem resonated throughout Beardsley Gym.

Although members declined to comment individually, they said in a team statement to The Daily that they acted in solidarity against the United States’ oppression of and injustices toward minority groups — especially after seeing peers and teammates struggle.

“We are trying to draw attention to the fact that our country is failing to honor its founding principles when it comes to people of color,” the statement said. “In no way do we want to disrespect the people fighting for this country, or who fought for this country. … We know what we protest for and continue to fight for.”

The protests began in 2016 with San Francisco 49ers quarterback Colin Kaepernick and spread to various other NFL players. On Sept. 24, after President Donald Trump’s tweet calling for owners to fire protesters, more than 200 NFL players sat or kneeled during the anthem.

Other ETHS students have followed in the volleyball team’s footsteps, including those on the marching band, football team and varsity boys soccer team. Several students told The Daily they would continue to kneel for the rest of the season.

Nia Williams, an ETHS junior who is black, said she empathized with the fear people of color feel regarding police brutality. As a marching band member, Williams said she began kneeling last year once she heard about Kaepernick’s decision.

“Me having the platform — which is marching band — and being on the field while the national anthem is being played, I feel like I can make a statement,” Williams said. “And it is not about the national anthem, it’s about something that is systematic. And that’s racism.”

At the Sept. 28 home football game against New Trier, a majority of the marching band kneeled for the anthem, with some members deciding not to play their instruments. They were joined by roughly 20 members of the ETHS football team.

Before the anthem was played, District 202 superintendent Eric Witherspoon said he hoped the community would continue to confront injustices and support marginalized populations.

“Many of our students have expressed their personal feelings, fears and anxiety about recent events across our nation, events vividly underscoring that people have suffered, been hurt and died in our country due to hatred, racism, bigotry and ignorance,” Witherspoon said at the game. “I thank them for their leadership on these issues that are so important to us all.”

In a statement the same day, Witherspoon said ETHS students have the right of free expression. He said students are allowed to sit or kneel during the anthem under the First Amendment, so long as they do not “significantly disrupt the learning environment.”

ETHS sophomore and marching band member Grey Miller said he and Williams spoke with administrators and the marching band director at length before deciding to kneel.

Miller, who identifies as African-American and Mexican-American, said the adults were accessible to and supportive of the students.

“No one could stop us from taking a knee,” Miller said. “They were very like, ‘Take a knee if you want to, or if you believe that it’s right for you to do.’ But our band director didn’t want any surprises.”

ETHS senior Sam Bogan, a person of color on the boys varsity soccer team, said he would remain on the bench at the beginning of the season while the national anthem plays.

When his teammates noticed Bogan’s refusal to stand, he said they listened to his concerns about racial inequality.

“I told them, ‘I’m either going to sit or kneel during national anthem,’” Bogan said. “And they said, ‘Well then you should kneel.’”

Bogan said his team’s support and the volleyball team’s courage inspired him to ask other soccer players to kneel with him.

On Oct. 3, at an away game against Maine South High School, almost the entire team took a knee during the national anthem. One player remained standing but expressed his solidarity by placing his hand on a team member’s shoulder, Bogan said.

Overall, the community’s response has been mixed, ETHS senior Theresa Tsaggaris said. While people in Evanston have mostly applauded the students, Tsaggaris — a marching band member who is both black and white — said the “outside community” has said many “nasty” things about their actions.

Dear Evanston founder Nina Kavin said in a Sept. 28 post that she had to take the photo down because many comments were “racist, misogynistic diatribes, hideous memes, swear words, and sexually explicit suggestions.”

Even in light of this, students said no one from the school has pressured or even asked that they reconsider taking a knee.

“(ETHS) allows students that advocate to do stuff like this, to take a stance on the issues that are happening in the country,” Miller said. “But you don’t get any consequence from the administration, the staff, the teachers or anybody in a position of power, and we’re really lucky to have that.”