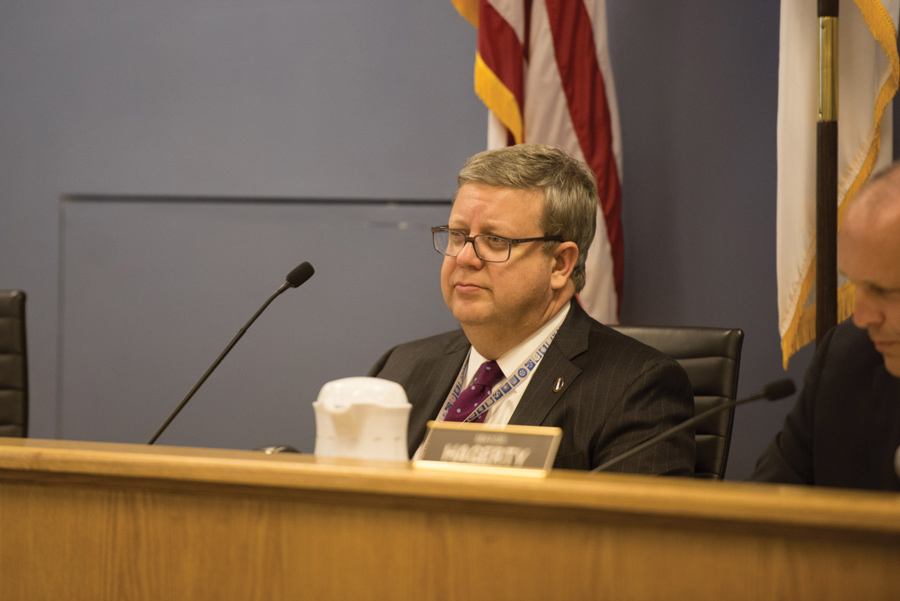 City manager Wally Bobkiewicz said the loss in revenue stems primarily from a $5 million decrease in building permits as construction slows down around town, as well as changes in the state’s taxation due to the new Illinois budget.

The city’s proposed budget, published Friday evening, is about $338 million, up more than $30 million from last year’s. The initial proposal plans to lower payments for employees’ health insurance, has a 3 percent pay hike for city employees and includes funding for renovations at the Robert Crown Center and Evanston Public Library.

“The plan that we have come up with is responsible,” Bobkiewicz said. “(It) provides needed services to the residents of Evanston without increasing the tax burden so horrifically that it really has a continued impact.”

But to solve the deficit, Bobkiewicz said staff suggests decreasing expenditures by an additional $4.4 million and increasing revenue by $2.4 million.

Assistant city manager and chief financial officer Marty Lyons said staff is proposing to rearrange departments and salaries to cut down on expenses. At the same time, the city is also looking to eliminate about 28 full-time positions across seven departments.

Lyons said because the city has about 820 full-time equivalent positions, the adjustments are not “large percentages.”

According to the budget proposal, some department positions would be consolidated into new roles, and the city proposes to create a video records clerk position to monitor footage from body and dashboard cameras. These changes would result in a roughly 23-person net reduction in full-time staff.

In addition, three positions in the police department and four in the fire department would undergo a hiring freeze; they would not be eliminated, but rather held vacant and unfunded.

“We didn’t touch police and fire at all through the recession or anything,” Lyons said. “This is a big deal, to say we’re actually going to hold the position open even if we’re not going to reduce authorized strength.”

The city hasn’t committed to hiring in house for its new positions, Bobkiewicz said, and staff is proposing a management audit for the police department to see if more reorganization is necessary.

Bobkiewicz said the employees who would be laid off if City Council approves the budget changes were notified Thursday.

“We’re pleased that there aren’t more service reductions, more layoffs,” he said. “Any time you have any is too many.”

Other reductions could come from a 4 percent decrease in non-personnel costs for city staff, council and the clerk’s office, as well as a $400,000 decrease in the economic development fund for special projects.

In the past, that fund helped Chicken and Waffles, Kabul House and Davis Transportation get off the ground.

In addition to lowering expenses, the city is proposing to raise $2.4 million in additional revenue, a significant portion of which would come from a roughly 1.1 percent property tax increase.

Staff said they did not want to burden residents further, after Evanston/Skokie School District 65 increased property taxes along with Cook County and the state. Revenue from the tax increase would solely fund police and fire pensions.

Lyons said the city’s share of property taxes — which doesn’t include the library, schools, pensions, debt or operations — is around $40 million, just under 17 percent of the total collected.

The property tax increase would bring in an additional $421,000, but the pension investment rate would remain at 6.5 percent — disappointing because the city had hoped to lower it to 6.25 percent this year, Bobkiewicz said.

The investment rate is the assumed rate of return on money in the pension fund. Many ratings agencies, such as Moody’s and Fitch, recommend setting the rate lower in case the fund doesn’t generate the expected investment and becomes underfunded.

In October 2016, the Administration and Public Works Committee received a report that both police and fire pensions were funded under 50 percent.

Lyons said although the investment rate will not yet change, the city’s fund is in better shape than many downstate police and fire pension funds, which still have rates at 7 percent.

“We’re still on schedule if not a little ahead,” Lyons said. “Even though we could be down at 5.5 percent, we should still step down to it slowly and not jump down to it.”
Additional revenue sources to balance the budget may include a rideshare services tax, an Airbnb tax and higher parking fees, according to the budget proposal. If council approves them, the rideshare and Airbnb taxes would generate $190,000, and the city will look to Chicago’s implementation process as a guide.

The first council meeting to discuss the proposal will be Oct. 16, though some aldermen will hold ward meetings for residents prior to that. Bobkiewicz said council will meet every Monday between now and Nov. 27 — when staff hopes to adopt the budget — so the community has a chance to comment.

Concerns about staff and services cuts have already come up as aldermen and the city’s equity and empowerment coordinator, Patricia Efiom, have analyzed the budget. This is the first time that Evanston is doing an equity assessment of its proposed cuts, which stems from Efiom’s target to establish equity as a priority for City Council.

After reviewing proposals to close the $6 million gap, Efiom said in a memo Friday that the proposed staff reductions are currently filled by six African-American, two Hispanic, 11 female and 12 over-the-age-of-40 workers.

Cuts to the health and human services staff especially, she said, would “disproportionately” impact people of color and low-income residents.

In addition, Efiom pointed to a proposed transfer of the Social Services Bureau from the police department to the Health and Human Services Department as a significant reduction in services offered to crime victims. With the transfer, the bureau would lose $400,000 in funding.

“This cut will have the greatest impact on African Americans since that population makes up more than 50 percent of those served,” Efiom said. She added, “The additional work necessary to integrate … will impact the (Health and Human Services Department’s) ability to maintain the level and quality of service to residents.”

Nevertheless, Bobkiewicz said the services themselves would not be eliminated.

“We will spend a fair amount of time talking and explaining that to the community and City Council over the next six weeks,” he said.