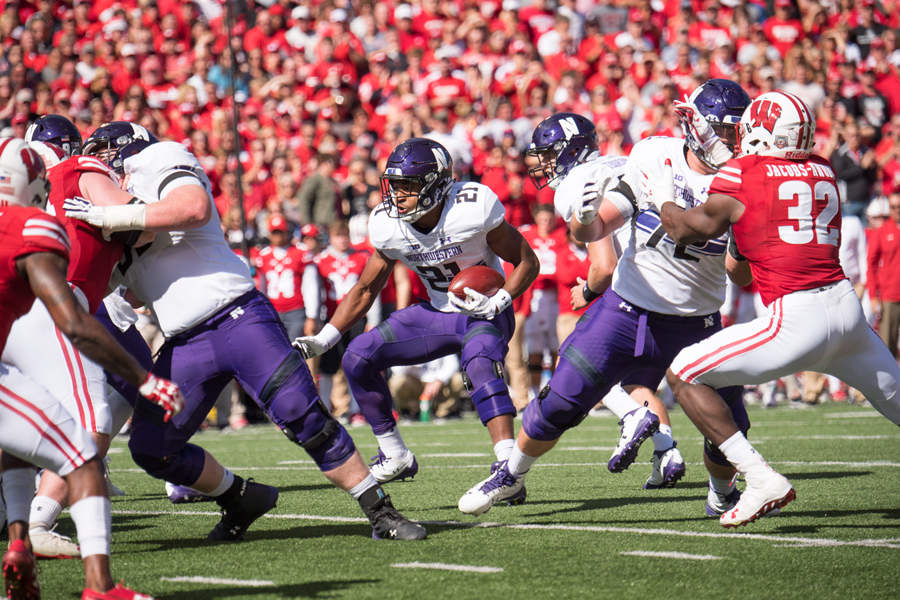 Justin Jackson carries the ball. The senior enters the weekend on the cusp of Northwestern’s career rushing record.

Justin Jackson has heard enough about it by now. He said he’s been hearing about it since last December, when he tore up 224 yards of Yankee Stadium turf in the Wildcats’ upset of Pittsburgh. The chatter continued through the offseason and September.

The good news for Jackson: He shouldn’t hear about it much longer.

Northwestern’s senior running back is on the precipice of history, now just 83 yards away from Damien Anderson’s all-time program rushing record after he racked up 273 in the first four games of this season.

“I just kind of shrug it off. It is what it is,” Jackson said of the noise around his chase for the milestone. “You can’t worry about stuff like that. You’ve just got to keep playing and try and help your team, because, when it comes down to it, if you don’t get wins, man, nothing really matters.”

A typically workmanlike answer from the Cats’ steady star running back. If talk is cheap, Jackson is a Ferrari. Nothing about his persona is loud.

Jackson, who has started since his freshman year in Evanston, brings his hard hat to work each week and consistently grinds out yardage. He may not run with blazing speed or crack uproarious jokes in postgame news conferences. But one thing’s for sure: Jackson can carry a football.

“The Ball Carrier,” as he is known to the Ryan Field student section, does it efficiently and consistently, with a preternatural ability to dance around defenders and the toughness to make the most out of short-yardage plays.

Asked this week about his nickname, bestowed upon him during his sophomore campaign in 2015 as a chant following each of his frequent rushes, Jackson shrugged that off, too. “It’s cool,” Jackson said. “It’s kind of spiraled out of control, but that’s OK.”

Jackson owes his ubiquity at NU to a career that blossomed from the get-go. When he arrived in 2014, he joined a team with a vacancy at tailback. Previous starting back Venric Mark was suspended by the team for a pair of games and decided to transfer before the season, leaving an opening for the four-star rusher from Carol Stream, Illinois.

Looking back, coach Pat Fitzgerald said he could tell from the outset Jackson had the potential to emerge as a special player.

“He wasn’t the biggest guy, but his work ethic was unbelievable in those early practices,” Fitzgerald said in September. “And we had a wide-open job.”

Meanwhile, Jackson kept his head down. He said he focused on adjusting to the college level, noting he did not even know if he would play in the first game.

But he did play, rolling up 40 yards against California. The next week, he bumped that total to 52 yards. Then to 92 the game after. By NU’s surprise victory over Wisconsin on Oct. 4 that year, Jackson had emerged as the team’s top back, racking up 162 yards in the field-storming upset in Evanston.

From that point on, the Justin Jackson show has remained a feature attraction at Ryan Field. He ran for 186 yards in a top-25 battle with Penn State in 2015 as the Cats topped the Nittany Lions 23-21. He raced for 188 in a road victory over Michigan State last fall. Twice, he’s cleared the 170-yard mark against Illinois.

“It’s always exciting knowing that if we do our job, he’s going to do the rest,” junior guard Tommy Doles said this week.

Anderson, the current record holder, has followed Jackson’s career and said the senior has a unique ability to make people miss. Anderson, who spent four years in the NFL, said Jackson has a level of creativity as a rusher that he wasn’t even able to display until he got to the pros.

But perhaps more striking than Jackson’s artistry is his raw volume of work. The halfback has suited up every game since he arrived on campus, logging double-digit carries in all but three. Over his college career, Jackson has rushed the ball 919 times for 4,402 yards.

That yeomanlike workload has helped set him apart from almost any running back in program history. Looking for similarities between Jackson and the other program-great tailbacks who have called Evanston
home, including Anderson, Tyrell Sutton and Heisman vote-getter Darnell Autry, Fitzgerald keyed on one descriptor: toughness.

Fitzgerald played with Autry, who stands fourth in program history in rushing yardage, and said the Big Ten was “a phone booth league” in their playing days in the mid-1990s.

“Everybody was tight to the box, and everybody was trying to run the football. And he’d be 35-40 carries and not be able to practice the next week,” Fitzgerald said of Autry. “And now you look at JJ, and that’s what you see — a durability, a toughness.”

Jackson missed practice himself before NU’s loss to No. 9 Wisconsin last Saturday due to a leg injury he sustained against Bowling Green. He still gutted it out on game day, playing with a brace on his leg. In the end, he finished with one of the quietest outings of his career, picking up 25 yards on nine carries as the Cats fell 33-24.

Junior quarterback Clayton Thorson noted the week of the Badgers game how often Jackson plays while banged up, saying the whole team feeds off the running back’s grit.

“Everyone sees that and sees how he just battles really throughout the game as well,” Thorson said. “He’s getting beat up, he’s taking these big hits. He pops right back up, tosses the ball back, and he wishes he could get more yards — when it’s like, ‘Wait a second, there are six guys in the backfield.’”

Jackson may epitomize a lunch-pail running back between the lines, but the senior said there’s more to his game than just physical guttiness. He said the daily, yearlong grind of football can become its own challenge beyond the hits he takes on game days.

As NU heads into its homecoming battle with No. 4 Penn State, Jackson has a chance to put that fortitude on display. After getting beaten down against the Badgers while playing hurt, Jackson said his leg feels significantly better. But pulling off a turnaround performance against a vaunted Penn State defense could require a heavy dose of toughness.

If he manages the feat, it could come with an added benefit: Jackson might find himself alone atop the school’s career rushing list. And he might finally stop hearing about it.