Game of the year: Men’s basketball vs. Vanderbilt in NCAA Tournament

After 79 years of futility, the Wildcats had finally put on their ballroom shoes and made an appearance in the NCAA Tournament. But Northwestern didn’t just show in front of a loud, purple-clad crowd in Salt Lake City. It put on a memorable performance against Vanderbilt in its debut.

The Cats were unfazed, building an early 9-point lead and carrying a 7-point edge into halftime. A 3-pointer by senior forward Nathan Taphorn extended NU’s lead to 15 at one point in the second half, but 12 straight points from the Commodores made it a game once more, and Vanderbilt retook the lead in the final moments.

The Cats were clutch at the free throw line down the stretch, and took advantage of a mental mistake from the Commodores’ Matthew Fisher-Davis that sent junior guard Bryant McIntosh to the line with 15 seconds remaining. McIntosh hit the free throws to give NU a 67-66 lead, and the Cats held firm on their final defensive possession to advance to a second-round game against Gonzaga.

McIntosh was sublime, leading all scorers with 25 points. And though many may remember the game for Fisher-Davis’ boneheaded foul, the thousands of raucous NU fans in Vivint Smart Home Arena could forever say they witnessed the Cats’ first tournament victory ever.

Moment of the year: Nathan Taphorn’s pass and Dererk Pardon’s shot against Michigan 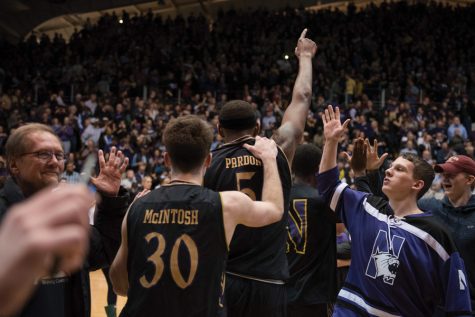 Tied at 65 and needing to go the length of the court in 1.7 seconds, the Cats seemed primed for overtime in a crucial home contest against Michigan. After three losses in their last four games, NU needed a victory to secure its suddenly-slipping NCAA Tournament hopes. But there would be no overtime.

Instead, Taphorn launched a full-court, football-style pass to Pardon, who gathered himself and calmly laid the ball up off the glass before the buzzer sounded. The ball glided through the hoop as the buzzer sounded, giving the Cats a stunning 67-65 victory that sent hundreds of students storming the Welsh-Ryan Arena floor in arguably the most memorable moment in program history to date.

Though NU executed the play to perfection, it wasn’t a well-rehearsed sequence. Consecutive timeouts before the play allowed assistant coach Brian James to draw it up, and Taphorn and Pardon did their jobs with aplomb. Once the dust had settled, the Cats had all-but-secured their historic tournament berth and NU fans had a memorable moment etched into their minds for decades.

Team of the year: Men’s basketball

The Cats entered the 2016-17 season with the same question as every previous one: Would this be the year NU finally broke its NCAA Tournament drought and become the last power conference team to make an appearance?

Expectations were not particularly high, as the Cats lost senior stalwarts Tre Demps and Alex Olah to graduation. Though junior guard Scottie Lindsey was expected to improve and sophomore forward Vic Law was back from injury, NU was generally considered to be a year away from making the tournament.

Something felt different from early in the season, however, as the Cats nearly pulled off an upset at Butler, rolled through Texas and took down Dayton. In Big Ten play, NU won six straight January contests as anticipation of a streak-busting tournament berth grew, and a stunning upset of then-No. 7 Wisconsin — despite the absence of Lindsey, the Cats’ leading scorer at the time — gave NU a resume-boosting win.

A February slump put those hopes in question, however, before a dramatic win over Michigan, capped by Nathan Taphorn’s pass and Dererk Pardon’s shot at the buzzer, put the Cats on the brink of the tournament. NU then earned the No. 8 seed in the West region and defeated Vanderbilt in a back-and-forth first-round game.

The Cats fell to top-seeded Gonzaga in a second-round game marked by a controversial goaltending non-call, but NU still broke its curse, had its most successful season ever and set itself up for even greater success in future years.

Collins received plaudits for his work in his first three seasons in Evanston, steadily increasing NU’s recruiting prowess and leading the Cats to a program-record 20 wins in the 2015-16 season. This season, however, was his finest, as he broke NU’s well-documented NCAA Tournament drought, guiding the Cats to 24 wins and a victory over Vander 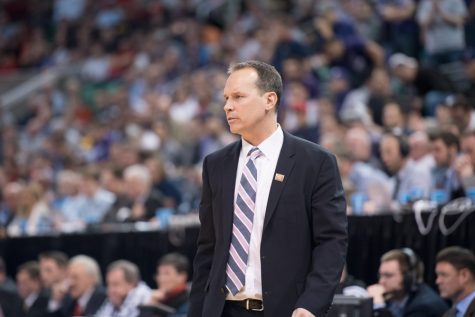 bilt in the tournament’s first round.

The former Duke assistant, who was a finalist for the Naismith Award as the best coach in college basketball, guided his team to several impressive wins, including a stunning upset at then-No. 7 Wisconsin in February and a strong victory against Maryland in the Big Ten Tournament.

He received praise for keeping his team calm and poised throughout the historic campaign, saying he did not hide the team’s goals and talk of the tournament drought from his players. That paid off with the win over Vanderbilt, and Collins is expected to continue NU’s rise with most of his core returning next season. 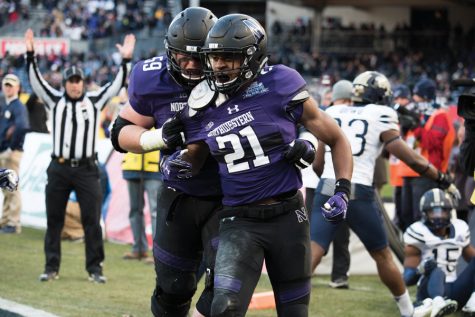 As wide receiver Austin Carr earned plaudits for an exceptional, breakout senior season and sophomore quarterback Clayton Thorson developed into a solid option despite an ugly non-conference slate, Jackson continued to be the workhorse of the NU offense. He rushed for more than 1,500 yards and tallied 15 touchdowns, averaging an impressive 117 yards per game.

His 1,524 yards were a career-best and the most in the Big Ten, and he earned first-team All-Big Ten honors from the media. Jackson finished his junior season second in program history with over 4,000 rushing yards and became the first in NU history to eclipse 1,000 yards in three separate seasons.

Jackson had several impressive performances in the regular season, topping 170 rushing yards on three occasions, winning Big Ten Player of the Week honors after a win at Iowa and scoring three touchdowns against Illinois to make the Cats bowl eligible.

Jackson then shined brightest in the Pinstripe Bowl, in which the Cats upset then-No. 23 Pittsburgh. He earned game MVP honors after running for a career-high 224 yards and three touchdowns, and had a career-long 68 yard carry.

After flirting briefly with the NFL Draft, Jackson decided to return to Evanston and is expected to have an even more prolific senior season, joining Thorson as the core of NU’s offense.

Starý came to Evanston from the Czech Republic expected to complement the Wildcats’ trio of standout seniors, and he didn’t disappoint. He announced his arrival with a bang by winning the Big Ten Singles Tournament in the fall, not dropping a single set en route to the title.

During the dual season, Starý was effective in both singles and doubles. He held down the No. 4 singles spot for most of the season, but also had a strong 6-2 mark at the No. 3 spot when senior Sam Shropshire was out due to injury. He won seven times in Big Ten play and picked up a crucial three-set win in the Wildcats’ first-round victory in the NCAA Tournament.

Starý arguably had his greater success in doubles, however. Paired with record-setting senior Strong Kirchheimer, Starý compiled a 19-4 record. The pair won all three of their matches at the No. 1 court despite playing the majority of the season at No. 2 and were ranked as high as No. 53.

Starý will be the Cats’ top-ranked returning player in both singles and doubles next year. He will likely move up the singles lineup and hold down a spot at a top doubles court. 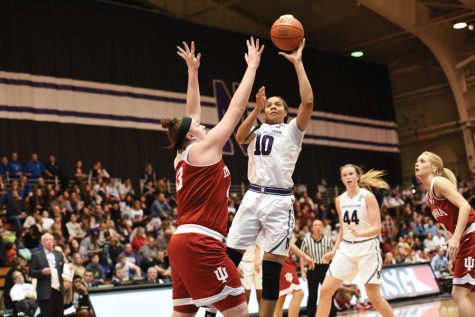 Coffey’s team may not have reached the NCAA Tournament, but the Wildcats’ standout senior had another stellar campaign. She led NU with an even 20 points per game and 10.4 rebounds per contest, becoming the first player in program history to receive All-Big Ten first team honors four straight years. Coffey leaves Evanston as the Cats’ all-time leading rebounder and second leading scorer.Daily file photo by Allie Goulding

She shined in NU’s biggest wins of the season, willing the Cats to an upset of then-No. 16 Florida with 30 points, then pouring in a season-high 34 in her penultimate game in purple, a win over Iowa in the Big Ten Tournament. Coffey was NU’s leading scorer on 25 separate occasions in her senior season.

Coffey was the fifth overall pick in May’s WNBA Draft — the highest in program history — and earned her first start in just her second game with the San Antonio Stars. A highly regarded prospect who will likely need to develop to reach her peak, she has averaged 3.0 points in four professional games.

Roberts arrived at NU as a highly-touted recruit and took little time to adjust to collegiate competition.

Despite her inexperience, she gave the Cats an anchor at the top of their lineup throughout the fall season. In all five meets in which she competed with her teammates, Roberts led the way for NU, notching the fastest 5,000-meter and 6,000-meter times on the team overall. And when the pressure was ratcheted up in championship season, she peaked, with a fourth-place finish in the NCAA Midwest Regional that made her the first runner to represent the Cats at the NCAA Championships since 2010.

Roberts’ sterling freshman year didn’t end with the conclusion of the fall cross country season. In March, she Daily file photo by Colin Boyle
a member of the U.S. under-20 contingent at the IAAF Cross Country World Championships. On the track in the spring, Roberts finished off the season with the second-best 5,000 meter time in school history in her final meet.