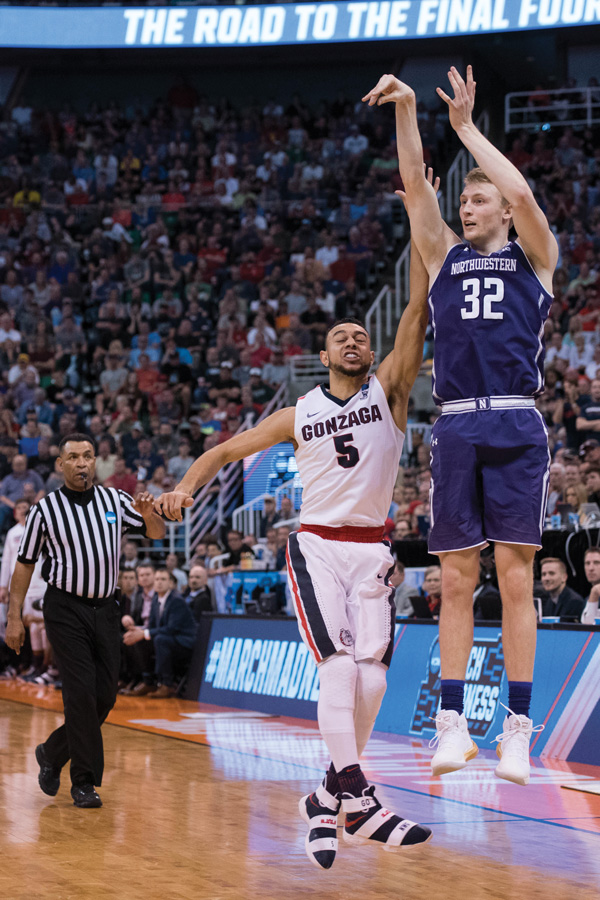 Nathan Taphorn fires a 3-pointer in the NCAA Tournament. Taphorn was a 3-point specialist for most of his NU career.

On March 1, Northwestern basketball finally had its moment. In dire need of a win, the Wildcats secured a ticket-punching victory over Michigan on a buzzer beater, all but sealing their first-ever trip to the NCAA Tournament.

And right in the middle of it all was senior Nathan Taphorn, who delivered the go-ahead assist and, in 1.7 seconds, carved an unforgettable legacy.

The moment brought the forward’s career full circle. Four years earlier, Taphorn joined NU — then a program in transition — eyeing nothing short of a tournament bid. And over the course of his career, the senior’s commitment to winning and helping his teammates improve helped the Wildcats make history.

Indeed, Taphorn’s legacy is more than just “The Pass.” But for a player whose biggest contributions came behind the scenes, the historic assist was somewhat fitting.

“For him to come out in the biggest game of the year and deliver a pass like that, it shows who he is,” coach Chris Collins said. “He’s going to have a moment for the rest of his life. Not many guys have that opportunity. He’s the guy that deserves it.”

When Collins was tapped to helm the program in 2013, he made it a priority to visit Taphorn, then an incoming recruit. He said he gave Taphorn the option to “get his release to go somewhere else,” but the Pekin, Illinois native never balked.

Citing Collins’ pedigree as a Duke player and assistant, as well as his expressed commitment to elevating the program, Taphorn was sold.

The two entered the new era together, running into their fair share of collective speedbumps but never losing sight of the ultimate goal.

For Collins, conference wins were far and few between. Meanwhile, Taphorn struggled to crack the rotation and adjust to the speed and physicality of college basketball. Both the team and the freshman forward had ways to go before they could compete for a tournament bid. But the seeds were planted.

“He was a big part of us starting our culture, building this program from where we started four years ago to what we wrapped up this season,” Collins said.

At the end of the campaign, Collins approached the then-freshman with advice: bulk up.

That summer, the 6-foot-7 forward added 30 pounds in preparation for a more dynamic sophomore season. And though his second year was riddled with injuries, Taphorn entered the back half of his career ready to be an impact player for a surging Wildcats team.

In Taphorn’s first two years, NU went a combined 29-36, going 6-12 in the Big Ten each season. With the ultimate goal still seemingly years away, frustration was mounting.

“It was like, ‘Okay, most of Chris Collins’ guys are still here. Why isn’t anything happening?’” Taphorn said. “So, we put our foot down and said, this is where we need to change.”

Among the changes was an increased focus on individual roles. For the sharpshooting Taphorn, that meant accepting his role as a spark off the bench.

The results followed, as Taphorn emerged as a consistent option in the second unit, spacing the floor and offering size and length.

“He was really comfortable with who he was,” Collins said. “(To) come off the bench, be that glue guy, be a veteran presence … he did a great job in the role.”

But Taphorn was looked upon as more than just a shooter. Both on and off the court, the then-junior embraced his role as a “big brother.”

“I had a feeling I wasn’t going to be the biggest impact on the floor, stats-wise,” he said. “It was fairly simple, just take care of everyone that’s around you and worry about yourself last.”

For Taphorn, that meant lending a helping hand whenever needed, whether offering a drive to the airport or offering a teammate advice during a tough time.

His efforts weren’t lost on Collins, who called Taphorn “as good a teammate as we’ve had on the team and in the program the last four years.” For a coach looking to instill not only a winning attitude in his team, but also a commitment to teamwork, Taphorn was the paradigm.

“In terms of who he is as a person, who he is as a teammate, as a friend, he’s exactly what I would want in all of our players,” Collins said. “He was always there for his guys. It is a great quality when you can enjoy the successes of your teammates.”

And though the team again fell short of the tournament during Taphorn’s junior campaign, the foundation was set for NU to make history.

Taphorn entered his final season determined to leave a legacy, make an impact and, more than anything, determined to make the tournament.

The clock was ticking, and the senior wasn’t ready to leave Evanston without realizing his goal.

“It didn’t matter what was going to happen along the season,” Taphorn said. “We were going to make the tournament. We were going to fight to the death. We were putting our foot down and saying, we’re doing it this year.”

An early injury to sophomore forward Aaron Falzon, the team’s other resident 3-point specialist, left Taphorn with a sizable on-court role as a senior.

He continued to impress as a shooter, scoring a personal-best 18 points against New Orleans in the non-conference campaign before leading the Big Ten in three-point percentage.

But even as he excelled — his peak performance coinciding with a regular season campaign that put NU in tournament contention — the senior couldn’t shake the feeling of disappointment from an earlier gaffe in the Cats’ November loss to Notre Dame.

Nineteen seconds away from a decisive upset, Taphorn turned the ball over on an inbounds pass and fouled the Fighting Irish’s Matt Farrell on a made basket, a 5-point swing that flipped the lead for good.

“He had to live all year feeling bad about what happened against Notre Dame,” Collins said. “He made one mistake in a game, we lose the game and it killed him. He had that on his mind all year long.”

It didn’t matter that NU was only on the brink of the upset because the senior had scored a then-season high 12 points, or that Collins continuously encouraged his forward to move on.

As the season wore on, and the Cats looked increasingly in need of a signature win to complete their tournament resume, Taphorn was continuously reminded of the missed opportunity.

“That stuck in my head the whole freaking season,” he said. “I said I wasn’t going to make another mistake, and I held true to that.”

And months later, he had his opportunity. Locked in a 65-65 tie with Michigan, NU needed a miracle with 1.7 seconds left and 94 feet to cover.

But Taphorn lofted a pinpoint pass across the entire court, hitting sophomore center Dererk Pardon, who scored the game-winner, all-but-punching the Cats’ tournament ticket in the process.

“I have no words for that,” Taphorn said. “I’m so grateful for being able to be in that spot and being a part of that team. Just to be remembered in history will be awesome.”

There is no question Taphorn will be remembered — though for more than just one play. For a program in the midst of incredible change, Taphorn provided stability and helped Collins forge a unique identity.

And as the next generation of Cats look to build on the historic success of the 2016-17 season, Taphorn’s contributions as a teammate won’t soon be forgotten.

“He brought a lot of great qualities on the floor, but also the intangibles and the character and the ability to be a great, great teammate,” Collins said. “He was a part of a team that did things that had never been done. And being a senior and a leader on a team like that is an amazing legacy.”

Correction: A previous version of a caption with this story misidentified who Nathan Taphorn hugged after an NCAA Tournament game. It was Aaron Falzon. The Daily regrets the error.