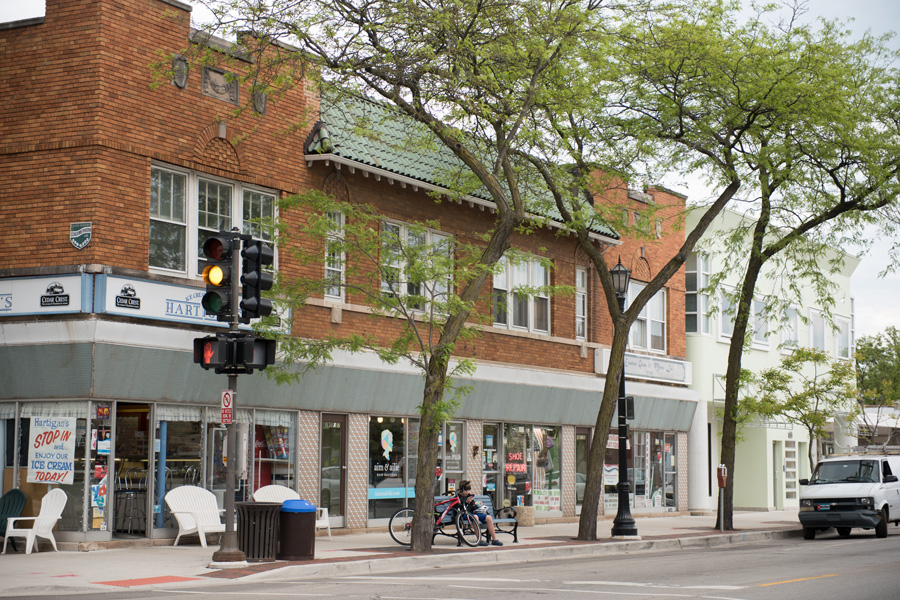 The intersection of Central Street and Lincolnwood Drive in the 6th Ward. The ward’s business district is filled with local shops that have been there for decades. (Katie Pach/Daily Senior Staffer)

The intersection of Central Street and Lincolnwood Drive in the 6th Ward. The ward’s business district is filled with local shops that have been there for decades.

Kessler, a retired Evanston schoolteacher, began making the floats with his neighbors when he moved to the ward roughly 40 years ago — in part to get to know them better. Soon, float-building had become a tradition that began every year in June. Kessler said his favorite float was a giant gym shoe, complete with oversized laces that his children could ride in.

“Everybody on the block had different skills,” Kessler said. “Some were artists, some worked construction, some were willing to just give advice. It really helped me to get to know everyone. … Now I know almost every neighbor on the block.”

The 6th Ward — bordered to the north by Wilmette and the south by Skokie — boasts a tight-knit community with politically active residents, former alderman Mark Tendam said. In the recent municipal election, the 6th Ward had about 53 percent voter turnout — higher than any other ward in the city.

“It’s certainly a very active ward,” said Tendam, who lost to Mayor Steve Hagerty in April’s mayoral election. “(We’re) highly represented on not-for-profits, boards of directors and things like that.”

At the same time, the 6th Ward also faces traditional “nuts and bolts city service” issues like ensuring crosswalks and traffic lights are improved, Ald. Tom Suffredin (6th) said. Both Tendam and Suffredin said improving mobility has become a priority in the ward, as longtime residents grow older and new families move in.

“The more vulnerable people in our ward are the young kids and seniors,” Tendam said.

Characteristics of the ward

The 6th Ward is a largely residential area, home to families who have lived there for decades.

But in recent years, Tendam said, the ward has attracted new residents and diversified its population, and has begun to examine its relationship with downtown Evanston.

Up until the ’70s, homes were restricted by covenants, making it difficult for people of color, Jewish people and other minority groups to buy or rent homes in the area, Tendam said. He said the 6th Ward was “the last stand” for covenants in the area, which has made some wary of making the move to the ward.

But with the abolition of covenants, the ward experienced a slight increase in diversity, Tendam said; there are now more people of color, members of different faiths and LGBTQ residents. In the last U.S. Census, Tendam said the 6th Ward counted about 10 percent of its residents as people of color, compared to around 40 percent for Evanston as a whole.

Though still a comparatively low number, Tendam said the increase is a step in the right direction.

The 6th Ward, which sits in the city’s northwest corner, is closer to Skokie and Wilmette than downtown Evanston. As a result, Tendam said the ward can feel isolated from the rest of city — something he said he tried to change while alderman.

Suffredin, who took over from Tendam earlier this month, said he also wants to make downtown Evanston attractive to residents of his ward.

Toni and Dana Dogterom, who moved to the ward in 1986, said they came to Evanston from Chicago in search of a unique neighborhood with good schools and nearby amenities.

They said they appreciate being able to walk to places like the grocery store and bank, but often go outside the city for other shopping — simply because the stores are closer than similar ones in downtown Evanston. Toni Dogterom said she and her husband do go downtown and have appreciated its expansion in recent years, but most of the time it’s just too far.

“We probably go to (Westfield Old Orchard) — sometimes even Wilmette, just because we live this far — more than we do downtown Evanston,” she said.

The 6th Ward has a nostalgic feeling to it, Tendam said, with vintage buildings and a shopping district filled with local businesses that have been in the ward for decades. Residents support small businesses through “shop local” initiatives and fundraising, Tendam said.

The Central Street Neighbors Association, a group that represents Evanston residents who live in proximity to Central Street, has partnered with the local business owners in their annual fundraising initiatives.

Board member Jeff Smith (Weinberg ’77), who ran for mayor this past cycle, said the association has always encouraged residents to support the businesses, which he said are an asset to the city.

“The many independent, local businesses are part of what gives Central Street its special flavor,” Smith said.

Harolds True Value Hardware, 2912 Central St., is a staple of the ward, Suffredin said. The store has been family-owned for three generations and opened up its Central Street location in 1953.

Susan Cawley — daughter of store owner Daniel Cawley — said her family has run the store since 1959. She began helping out at 8 years old and now works full time with her father, brother and sister. One day, she said, she hopes to pass the store on to her nephew.

Although the store is a member of the True Value hardware cooperative, it remains independently owned and operated. Cawley said people in the ward tend to be supporters of small businesses like hers, as opposed to big box stores.

Cawley said she spent so much time in Harolds as a child, it felt like she grew up in the store itself. Over the years, Cawley said she has seen families grow and expand in the neighborhood, with new generations choosing to return after college.

“It was always special to be here … and be able to have your grandparents here,” Cawley said. “We spent so much time checking in on everybody. You’re growing up with your family and basically the neighborhood.”

The store has stood the test of time and remained a place where the atmosphere is personal, Cawley said. Customers can still take a number and be served individually, and Cawley said neighbors often see each other in the store and catch up over coffee.

Megan Hickman and her husband have been living in the ward for two years. Nine months ago, she gave birth to twin boys who had to remain in Evanston Hospital, which is close to the Central Street business district. Hickman said the ward and its businesses helped support her family throughout the process.

“(The support) reciprocates between the businesses and the people who patronize them,” Hickman said. “Everybody knows everybody. Not only do you go out and support the businesses, but also they get to know you too and you have this nice back-and-forth relationship.”

A tradition of a close-knit community

Both Tendam and Suffredin emphasized the familial feeling that permeates the area, saying the presence of residents of all ages in the 6th Ward provides for a unique environment where children and seniors can interact and learn from one another.

Suffredin himself grew up in the ward and moved back from southeast Evanston with his wife to raise their children.

Tendam said residents of the ward capitalize on the relationship between seniors and children, providing opportunities for programming and interaction so both generations can learn from one another. He said block parties are a big tradition in the ward and are a way for neighbors to spend time with one another.

“We have more block parties than the rest of the city combined,” Tendam said. “It’s steeped in tradition.”

Since moving to Evanston, Kessler has watched his children grow up and has become a widower. He still gets together with his neighbors — also long-time residents — every month to play cards.

Kessler said the senior centers in the area often hold programs for local kids that let the two generations come together. Even the 4th of July floats Kessler used to make are a tradition he has now passed on to younger neighbors, who make a point of bringing them to seniors at local centers before the parade.

Though Kessler now lives alone, he said children from up and down the street still play on his front yard, just as his daughters did when they were little. He recalled that when he had his windows replaced last year, the workers thought he had five or six grandchildren.

“I said, ‘No, no, those are just the neighbors’ kids’,” Kessler said. “My front yard is their front yard.”