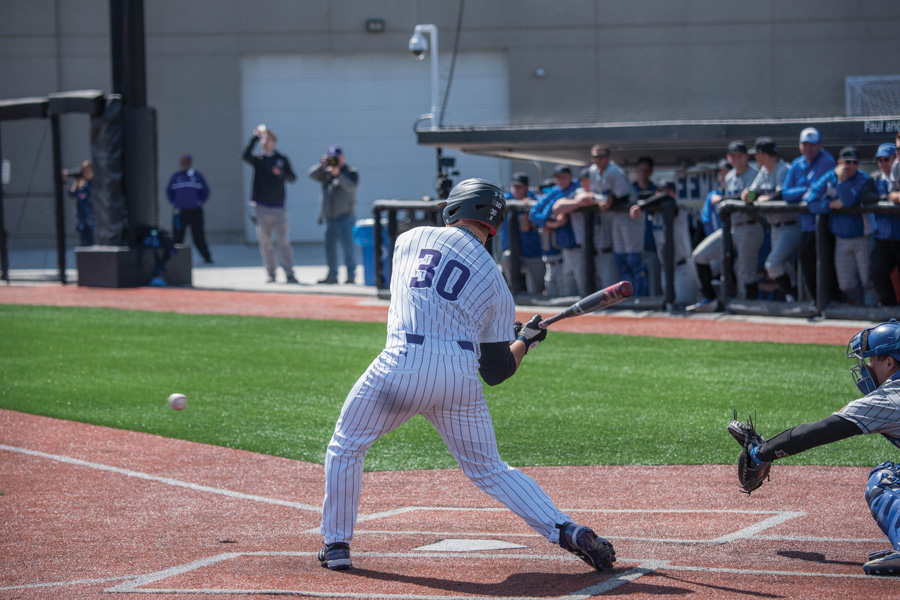 Curtain Call: Outfield trio goes out with best season of their careers

Two coaching staffs, 136 losses, 14 of those by 10 or more runs. Three heartbreaking walk-off losses in a senior season. And the first Big Ten Tournament appearance by the program since 2010.

Joe Hoscheit, Jake Schieber and Matt Hopfner have been through a lot in the past four years of Northwestern baseball, but the trio’s dedication finally paid off with a postseason spot in their final year with the program.

“It’s all I could ask for,” Hoscheit said. “We haven’t made the tournament in seven years, so that’s always been a goal of ours, and it was again before this season. To achieve that is pretty awesome.”

Before they made the tournament, however, the group had to endure the trials of the previous three years, marked by losing streaks, blowout defeats and a junior season that set the record for program losses.

When Hopfner was planning his future, however, he didn’t think about the potential for those things. Instead, he focused on continuing his athletic and academic careers.

“I decided to just focus on baseball in high school because I knew that was my best shot to play in college,” Hopfner said. “Academics were always important to me and my family, so I just tried to use baseball to get into the best school possible. Northwestern was a great fit.”

Though Hopfner came south from Minnesota to join the Cats and continue his baseball career, both Hoscheit and Schieber are local kids from about an hour southwest from Evanston. Both grew up on NU sports.

All three were recruited by former coach Paul Stevens, who had been in charge of the program since 1988 but retired after the 2015 season. They had to make a choice whether to stay with an unknown staff or transfer, as many student-athletes do when a new coach is hired.

“Everyone was a little uneasy at first just because you never really know what’s going to happen,” Schieber said. “I was worried for a little bit at first, but the second I met the full coaching staff I realized it wasn’t going to be a problem.”

Coach Spencer Allen and the new staff may have had success in the clubhouse, but on the field it was a different story in 2016. After a relatively promising 4-4 start, the Cats dropped 12 of their next 13 games en route to a 15-39 season that set the program loss record.

When California came to town at the end of the season, the Golden Bears encountered a demoralized team with nothing to play for, and they walked out with a four-game series sweep in which the combined final score was 59-5.

The progress wasn’t showing on the field, but off the field a unique chemistry was developing among the outfielders that has carried over to this season.

“All of us living together and being together as an outfield group is something special,” Hoscheit said. “It’s great. We spend every living moment together. We’re together as much as possible, and that’s something we’re trying to cherish these last couple weeks.”

The group has been more than leaders in the clubhouse, as they have also powered the offense on the field. All are in the top four in on-base percentage, and Hoscheit and Hopfner are the top-2 on the team in batting average and RBIs.

In addition to hitting for average, Hoscheit leads the team with five home runs and a .537 slugging percentage. While Hoscheit has been launching homers, Hopfner and Schieber have been successful on the basepaths, combining to steal 11 bases in 13 attempts. 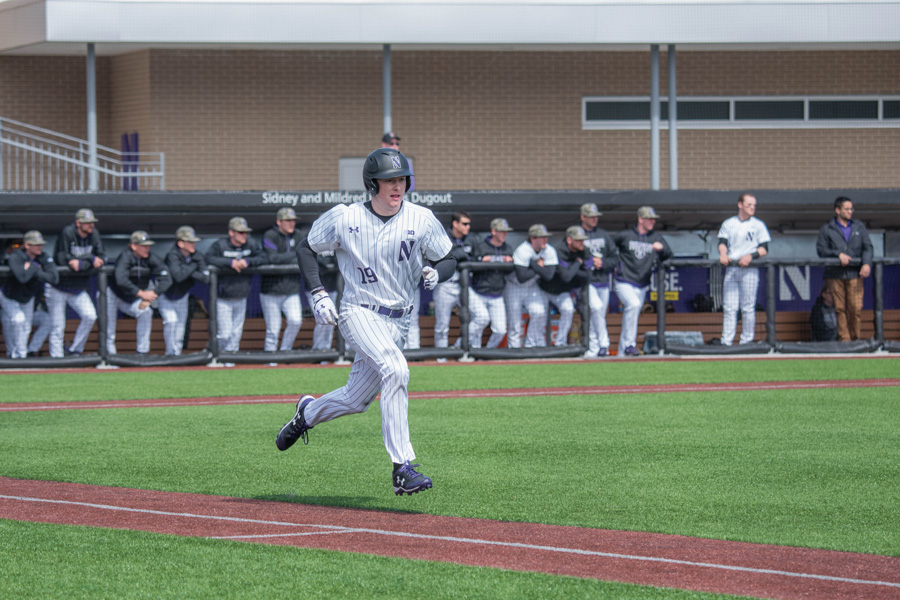 Daily file photo by Katie Pach
Matt Hopfner runs to first base. In his final year in Evanston, the senior outfielder has helped lead the Wildcats to their first Big Ten Tournament appearance in seven years.

“We’ve just come together as a team and really have an expectation to win,” Hoscheit said. “In years past we’d turned it around at points, but it was too little too late. This year we’ve been playing great baseball consistently.”

Last year, part of the problem was an abundance of errors committed by the Wildcats in the field, as they averaged over one per game and totalled 67 on the season.

That number is down to 46 in 2017, with Schieber making the most plays on the team in the field without an error on the season.

“When you’re with the guys 24/7 and next to them in the outfield, it’s something you don’t experience anywhere else,” Hopfner said. “There’s obviously a lot of trust and belief in each other. That’s the main thing and that’s developed throughout these years.”

The chemistry was present from the start of the season, but the results came slowly. The squad sat at a lowly 6-18 after dropping the first game of a non-conference series to Air Force in early April.

That Sunday, however, the Cats came back with a season-changing win; the team is 16-10 since junior infielder Connor Lind launched a walk-off home run in the 11th inning to win the game.

“I’d never been a part of a walk-off home run,” Hoscheit said. “Connor Lind’s walk-off was pretty special. That was one of the turning points of our season, and I’ll always remember that forever.”

It wasn’t all perfect after that day, however, as the Cats suffered emotionally draining walk-off road losses to Illinois, Penn State and Purdue.

But when the team went down, the seniors picked them up the next day. After the Illinois loss, Hopfner and Hoscheit both homered as part of an 11-4 bounce back victory, and after the Purdue defeat Hoscheit had a first-inning RBI double, the first of his four hits on the day as the Cats won a wild 8-7 game.

“The mindset is different this year,” Hopfner said. “We’ve learned how to win in different ways throughout the year, coming from behind or getting off to a lead at the start. No matter what situation we’re in, we have that hope and belief that we’re going to win.”

That combination, and all the work of the previous seasons, culminated with the second-to-last series of the year at Maryland. The Terrapins were 19-1 at home before NU came to town, but the Cats took the series in dramatic fashion.

On a day in which the senior outfield trio had combined to go a decent 5-for-14, it was the freshmen who came through at the end, with Alex Erro launching a go-ahead home run and Josh Levy locking down the bottom of the inning to secure the series.

For Schieber and the rest of the team and coaching staff, it was a sign that the seniors will leave the program in good hands after this year’s run is done.

“I’d like to think I have a positive effect on the people around me,” Schieber said. “Us three, we try to be leaders, we try to do the right thing, be an example for the younger guys. I hope they can learn from us.”