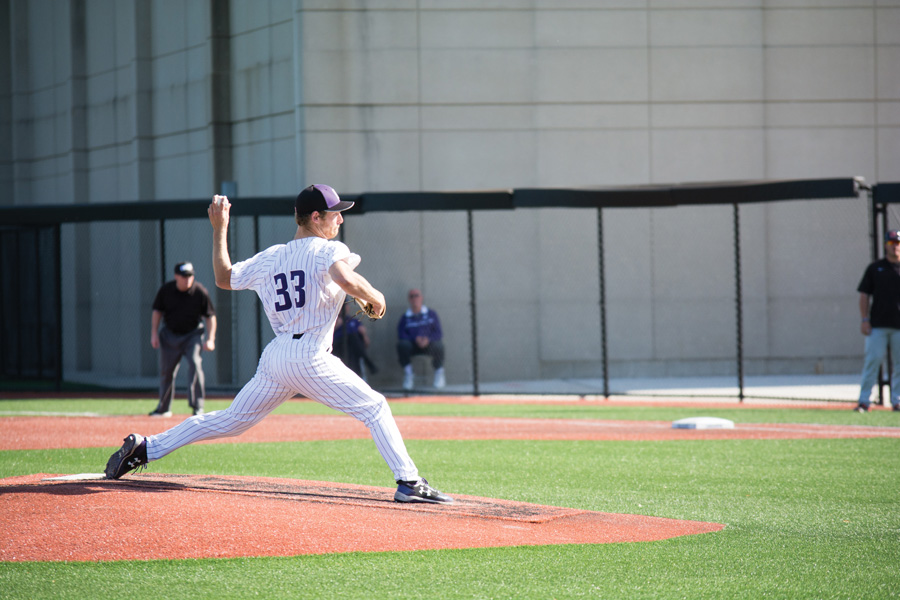 Forty percent of students at Northwestern are in Greek life. Only 6 percent are varsity athletes. Most who do both likely don’t have a double major and a minor.

But senior pitcher Cooper Wetherbee is one of those select few.

“We tell our guys that it takes a special person that can balance all of that and then still, with the rigors of a Northwestern education, you have to really, really have your time management skills and just have everything balanced out,” coach Spencer Allen said. “You just have to be special, and Cooper is.”

Wetherbee’s route to becoming the Wildcats’ Friday night starter is particularly unconventional. He didn’t join the varsity team until a successful walk-on tryout before his junior season, after deciding to leave the club team. He spent two years on the club team, during which he also played trumpet in the NU marching band.

“He just said, ‘I think you have the talent to be successful, try to move up a level. Why wouldn’t you give it a shot’,” Wetherbee said. “Immediately I came up with all of these excuses: I don’t have time; I like what I do already; I don’t want it to affect school. I’m not sure that I care enough about baseball to actually make it that big a part of my life.”

Despite his initial opposition, Wetherbee considered the idea. He said he wanted the opportunity to see how good he could be at the sport that up until then he had described as “just something fun that I did to blow off steam.”

Wetherbee said he did not have significant playing time in high school until his senior year and didn’t think of baseball as a cornerstone of his identity until joining the NU team.

“It’s kind of wacky when I step back and look at myself as somebody who now, that’s a very central part of who I am at this school and who my friends are, and kind of the way that people relate to me,” Wetherbee said. “So it has definitely been a journey.”

His tryouts coincided with Allen’s first season as the Cats’ head coach after leaving his assistant coaching position at Illinois. He credits the timing as a contributor to his making the team.

Wetherbee said Allen and the rest of the coaching staff came to Evanston seeking players to fill holes in the roster, and it worked out in Wetherbee’s favor.

“It’s crazy to think (of Wetherbee as) a walk-on tryout, a goofy lefty sitting there,” Allen said. “I keep telling people I’m glad I didn’t know he was in the band before we offered him the spot.”

Friday nights under the lights

Nearing the end of his NU career, Wetherbee has become a key component of the Cats’ success. He has made 18 appearances this season, beginning as a closer and working his way to becoming the Friday night starter.

After 11 mixed appearances early in the season, highlighted by a scoreless inning with two strikeouts against Western Michigan on April 11, Allen made a move: He inserted the former walk-on into the weekend rotation.

Wetherbee had a rocky Friday night debut against Illinois, throwing an inefficient 106 pitches in 5.1 innings and allowing six hits and 3 earned runs. Since then, however, he has settled down, tossing 7 scoreless frames against Rutgers in his most recent appearance.

Statistically, Wetherbee is among the best arms on an NU team on the brink of earning a berth in the Big Ten Tournament. His 3.03 ERA is the lowest on the squad, and he has struck out 45 batters in 59.1 innings this year.

“He’s been huge. He’s been one of our most consistent arms day in and day out, he really gives us a chance on Fridays,” freshman infielder Alex Erro said. “The other teams’ Friday night starters have been pretty good that we’ve faced, and I have no doubt on my mind that when Cooper’s on the mound, he’s going to go out there, pound the zone and give us a close start.”

Allen described Wetherbee as excelling on multiple levels, and has spoken highly of the team’s senior leadership, particularly in terms of keeping the younger players calm in high-pressure situations by maintaining the preparation routines.

Although Wetherbee’s is impact on the mound is clear, Allen stressed his appreciation for the senior both on and off the field.

“On the field he’s been great, but even behind the scenes, just what he brings, it’s just a really cool story,” Allen said. “But beyond the cool story, he’s our Friday night guy that has pitched really well.”

Wetherbee excels not only on the field, but academically as well. He was Salutatorian and a National Merit Scholar in high school, then chose to attend his father’s alma mater.

Despite his growth on the field, one thing is unchanged from high school: Academics is something Wetherbee still strives to “go above and beyond in.”

He will graduate with a double major in economics and environmental science and a minor in transportation and logistics shortly after his playing career ends.

“Academics is obviously really important to me, and part of that is just coming in not recruited as an athlete and just having planned on being here as a regular student,” Wetherbee said. “When I joined the team, it was something that I didn’t want to have to sacrifice.”

With a time-consuming workload and practice schedule, Wetherbee has had to make some sacrifices. He said he has needed to carefully manage his time to put in the work necessary in each aspect of his NU life.

“The sacrifices are probably more in the social life,” Allen said. “Coop, he’ll say he’s a nerd, he likes it, but he’s going to study, he’s going to work hard and be around his teammates, and those other things. He’ll sacrifice parts of his social life and not the weight room, the work he’s putting in there, those types of things, he’s going to make sure he’s fully committed.”

Wetherbee will transition to the professional world immediately after graduating, beginning work at a consulting firm in the summer.

Though his college career began in far different fashion than it will end, Wetherbee said the journey has taught him many life lessons, including the need to consistently put in effort and maintain a work ethic in whatever he does.

“When I joined the marching band I’d never marched before and that was something that was completely new to me,” Wetherbee said. “It was also just really, really difficult to be pushed at something that I wasn’t that naturally talented at, and I think that helped me develop a work ethic to kind of get where I am as far as baseball goes as well.”