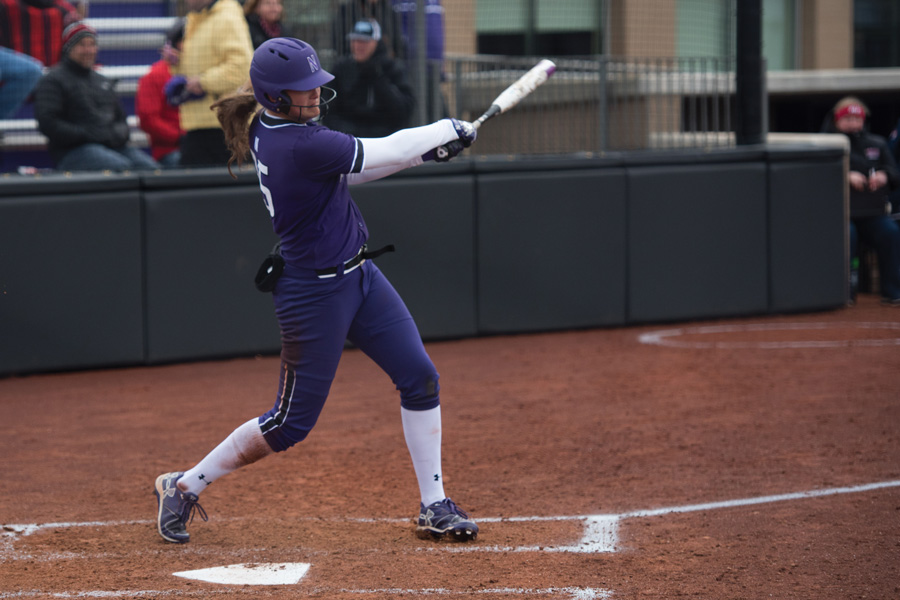 Anna Petersen and the Wildcats were no-hit in the final game of the senior outfielder’s career, a 5-1 loss to Minnesota last Friday in the Big Ten Tournament’s second round.

But that finish was an ironic end to Petersen’s four years at Northwestern, during which she experienced steady improvement, prevailed over nagging injuries and eventually commanded the Cats’ offense. In her senior season, Petersen finally realized her promise as a power hitter, earning the rights to the cleanup slot after a career-defining weekend against Maryland in early April.

Northwestern is in Petersen’s DNA, literally. She was born in Evanston and baptized at NU’s Sheil Catholic Center. Her grandfather is an alumnus, and her mother formerly worked at the Medill School of Journalism, Media, Integrated Marketing Communications.

Petersen comes from a large and athletic family — she is the oldest of six children and just one of many student-athletes. Her father played baseball and football at Iowa State, while her younger sister Ellie is a junior volleyball player at West Point and her brother Jacob is a freshman playing baseball at the University of Chicago.

Although her parents relocated southwest to Aurora, Illinois when she was young, Petersen said her Northwestern origins form an important part of her identity.

“I can’t really remember living here … because I did move away when I was a couple years old,” Petersen said. “It’s just a fun fact about me, but honestly, playing at Northwestern is kind of like coming home.”

Petersen racked up accolades in the classroom and on the field during her four years at Metea Valley High School in Aurora.

She earned twelve varsity letters while being named to eight different Academic All-Conference teams and managing a 4.67 GPA. On the diamond, Petersen received two All-Conference awards, slugged 10 home runs and 45 RBIs as a sophomore and hit .495 as a junior.

These achievements caught the eyes of NU’s coaching tandem of twin sisters Kate and Caryl Drohan.

“Anna is a great athlete,” Kate Drohan said. “She’s very strong, an incredible worker and a really bright student — so we thought she’d be a great fit for Northwestern.”

Petersen said she attended her first college workout before her senior year of high school, and was quickly sold on NU. She attributed the decision to many of the reasons students are drawn here — the elite academics, the proximity to Chicago and the diverse community — but most of all to the Drohans’ premier softball program, which had reached a Women’s College World Series as recently as 2007.

As a senior looking back, she found no fault in that reasoning.

“(Kate and Caryl) are just the best when it comes to on-the-field coaching, and the relationships that I’ve shared off the field with them as well,” Petersen said. “They’re just the most incredible people, and I can’t be more thankful that they saw something in me when I came to my first camp.”

The momentum Petersen gained her sophomore and junior seasons at Metea Valley came to an abrupt halt when she tore her meniscus her senior year.

The injury lingered during her time in Evanston, as Petersen re-injured that same knee at the end of her freshman season, and has been a frequent victim of the injury bug since then. Despite never needing a surgery during her collegiate career, she braved those complications and shoulder ailments up through her final season.

“It kind of feels like in my four years here I’ve never caught a break,” Petersen said. “I’ve hit my stride, but then things come up (and slow) me down. It’s brought a lot of frustration, and often left me wondering if I could have done more to prevent it. But each little setback was a lesson in how to overcome obstacles, regardless of how significant.”

Petersen’s output from her first three seasons shows that youth kept her from consistent playing time, but also that nagging injuries may have slowed her. In her first two years on campus, she totaled a meager eight plate appearances, and in her junior season, she tallied only one extra-base hit in 39 at-bats, not yet demonstrating her power potential.

However, Drohan said the numbers aren’t always so telling.

“Yes, she has always battled some different injuries throughout college,” Drohan said. “But when she’s been able to go, she’s (given) her team her all.”

Petersen’s senior year had an unspectacular start, besides a 3-for-3 game against North Carolina State on February 25, in which she recorded two doubles, a home run and five RBIs. She finished the Cats’ opening stretch of non-conference play with a .250 average, and hit seventh in the lineup in the team’s first Big Ten game against Wisconsin in late March.

The transition into conference play appeared to have lit a fire under Petersen, because suddenly, she became the power-hitting force Drohan said she always envisioned.

“We knew we would count on her this year to provide that power in our lineup,” Drohan said. “She’s really grown a lot as a ballplayer over the years, and there were some moments where she really led our team.”

Petersen smashed two homers in the second game of that series with Wisconsin. Then, after a sluggish offensive effort in NU’s Michigan series the next weekend, Petersen exploded at home against Maryland.

In the series with the Terrapins that earned Petersen Big Ten Player of the Week honors, she led the Cats to two wins after a dismal 1-5 start in conference play and proved that the cleanup spot — which she first held that weekend — was hers to keep.

Though a slump at the end of the season caused her average to dip from its Big Ten peak at .306 down to .262, Petersen finished as the team’s leader in numerous categories — doubles, home runs, total bases and slugging percentage. Her 14 doubles were good enough for the program’s fifth all-time in a single season.

“This year, I resolved to leave it all on the field and accept whatever might be thrown at me,” she said. “I tried to make the most of the opportunities I (was) given and to obviously be thankful for them too.”

With the season concluded, Petersen awaits graduating from Northwestern’s McCormick School of Engineering with a degree in mechanical engineering, and starting her job at Northrop Grumman, a federal defense contractor in Rolling Meadows, Illinois.

Petersen’s legacy isn’t contained to her impact in right field and the batter’s box, or her academic accolades — she was named Academic All-Big Ten in 2015 and 2016 — but perhaps is best represented by the mentorship and guidance she provided in the dugout, at practices and off the field.

Drohan insisted that Petersen and her fellow graduating seniors, first baseman Alcy Bush and left fielder Krista Williams, led the way in that regard, using their seniority to advise the team’s younger players and build strong team chemistry.

“Anna’s always there for her teammates and she’ll do anything for them,” Drohan said. “She’s a very kind soul, and that’s been evident throughout her entire career.”