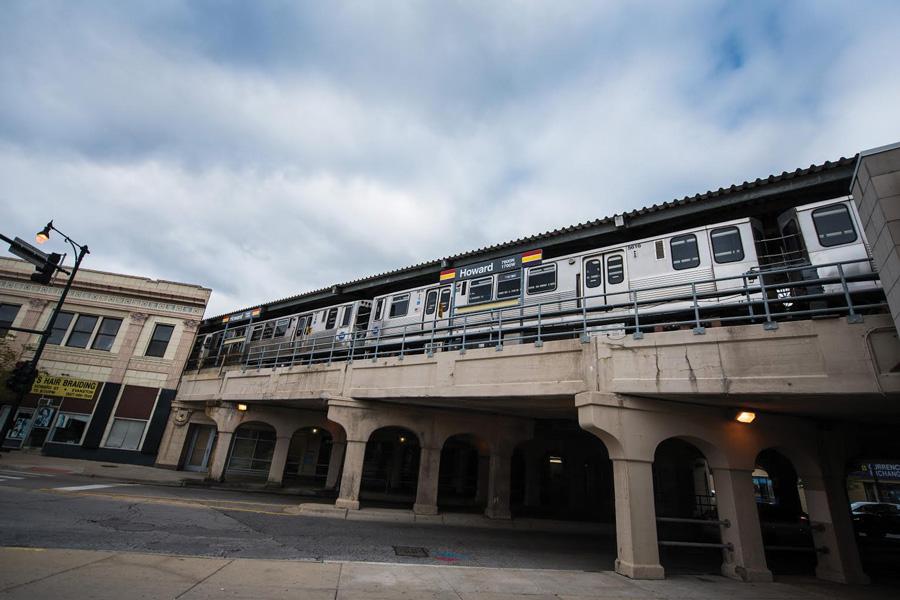 A CTA train rolls over the Howard Street stop in the Eighth Ward. Howard Street has been the site of a city-driven economic revitalization. (Daniel Tian/Daily Senior Staffer)

A CTA train rolls over the Howard Street stop in the Eighth Ward. Howard Street has been the site of a city-driven economic revitalization.

At Evanston’s southern border, 8th Ward community strives to make itself central to the city

Ald. Ann Rainey was elected 8th Ward alderman in 1983, a few years after she moved there from the 3rd Ward and almost a decade after the passage of the Landlord Tenant Ordinance.

She soon found the ordinance — which established the rights and obligations of both landlords and tenants — had done little to quell “problem landlords.” Additionally, many outside the ward regarded it as unsafe, and few took the time to visit the ward’s main thoroughfare, Howard Street.

The 8th Ward encompasses most of southwest Evanston and is bordered to the north by Oakton Street, to the west by McCormick Boulevard, and by Chicago Avenue to the east. To the south, Howard Street serves both as the ward and city’s border with Chicago.

Besides a four-year hiatus from 1993 to 1997, Rainey has served the longest of any alderman and has become the ward’s self-professed “change agent” on City Council, bringing the “great 8th” through decades of transformation. However, as lawsuits and ordinances pushed out subpar landlords and the ward rebounded economically, some longtime residents were pushed out.

In the late ‘70s, Rainey said she noticed landlords were forcing people to leave their homes without warning and failing to keep up property standards.

As an original member of the Tenants Organization of Evanston, Rainey said she helped write the initial Landlord Tenant Ordinance. The ordinance, passed in 1975, puts both the landlord and tenant as responsible for maintaining and improving the quality of housing.

However, Rainey noticed landlord problems still persisted in the 8th Ward years after the ordinance was passed.

Once owners “milked all they could” out of the tenants, some ignored basic maintenance and allowed the buildings to deteriorate, said Judith Fradin, an 8th Ward resident for 43 years.

The east end of the ward, filled mostly with multi-family homes and single-family flats, bore the brunt of the landlord malpractice, Rainey said. After a while, Rainey said she “decided to stop complaining” and become an alderman to address the issues.

Evanston police Cmdr. Joseph Dugan — a city patrol officer in the late 90s — said Rainey and residents in the 8th Ward would attend court hearings in Skokie to inform judges of living conditions back home.

In turn, Rainey said the judges drove with sheriff deputies to buildings on Clyde, Callen and Custer Avenues on several different occasions because they could not believe what inspectors were telling them.

“The landlords were saying, ‘Oh, everything’s fine here,’” Rainey said. “And we had judges ordering landlords to live in their building for six months so they could see what it was like. We had one judge order a landlord to not buy another building in Evanston for 10 years.”

Dugan said by the time he became a patrol officer, what was once a widespread issue had dwindled to only a handful of problem landlords. The ordinances created to curb the issue and the neighborhood effort eventually forced landlords to leave, he said.

Then came the condominium boom: Developers purchased and converted buildings whose owners did not properly screen and manage tenants or make full repairs.

The report noted that of the development projects affecting about 800 Evanston rental units since 2000, more than 500 converted units were in the eastern part of the 8th Ward, between Asbury Avenue and Chicago Avenue.

But in May 1999, then-Human Relations director Paula Haynes told The Daily the increasing trend of condominium conversions would put the city in danger of eliminating its middle class and creating a greater divide between opposite ends of the economic spectrum.

“It becomes an economic form of discrimination,” she said.

According to the 2009 report, because condominium conversions were more lucrative than maintaining rental buildings, apartment building owners trying to keep afloat in a more expensive market began to sell units for higher prices as the boom continued.

This led to the displacement of some residents who could no longer afford to live in the area, said Sarah Flax, the city’s current housing and grants administrator.

Rob Bady — who moved from Chicago to Evanston 16 years ago seeking affordable rent — said the city could have done a better job in helping its citizens transition during the conversions.

But Flax said the condominium boom did allow a significant number of low- and moderate-income individuals to become homeowners, as condominiums are typically cheaper than Evanston’s single-family homes. To ease the burden on residents, the city used federal funds to help pay to relocate tenants who lived in renovated buildings.

Also on Rainey’s to-do list was changing the perception that the 8th Ward has significantly more crime than other areas of the city.

Jeannemarie Sierant, an 8th Ward resident for 14 years, said other Evanston residents tend to believe the 8th Ward has a greater problem of crime than it actually does.

Rainey attributed the perception to the 8th Ward sharing a border with Chicago.

“In terms of crime, I’ll challenge anybody (in Evanston) to say they’re doing that much better than we are,” Rainey said.

Dugan attributed the unsafe perception of the 8th Ward to activity on Howard Street, which serves as the border between Evanston and Chicago. Dugan said people often commit crimes on both side of the street regardless of the border between cities.

In addition, Rainey said, groups of citizens from both the Chicago and Evanston sides of Howard Street have been active in reporting incidents to city officials and police.

For example, when a slew of disturbances were reported in Brummel Park about 10 years ago, new and old 8th Ward residents alike set up Brummel Park Neighbors — a neighborhood watch group — to patrol the park as well as pick up trash.

And this past August, after an attempted sexual assault in the park, residents held a vigil there the next day to send a message that assault would not be tolerated.

Dugan said there have also been fewer incidents of crime in the ward in recent years: The department’s 2015 heat map, which indicates all areas where shots were reported but not necessarily proven, shows that of the 100 shots fired calls reported citywide, 17 were in the 8th Ward, he said.

“There is not a ward in the city, or anywhere on this earth, that is crime free,” Dugan said. “I don’t think there is any ward in our city that could be characterized as being ‘crime ridden.’”

Throughout her time as alderman, Rainey has pushed for economic development along Howard Street, using funds from tax-increment finance districts to help fund new businesses along the corridor.

Rainey’s vision was to pack the streets with restaurants, a cocktail lounge and performing arts theater.

Although entrepreneurs were wary at first, Rainey eventually persuaded two pairs, now the owners of restaurants Ward Eight and Peckish Pig, to set up shop on Howard Street.

Debbie Evans, the executive chef and owner of Peckish Pig, 623 Howard St., said she was looking for a change after spending eight years in downtown Evanston as the owner of The Celtic Knot. When Rainey heard Evans was thinking of moving, she reached out and shared her plan to “revitalize” Howard Street, Evans said.

Evans said she sat down with her husband and they discussed whether it would be worth taking the risk to open a restaurant on a street that, to begin with, did not have much foot traffic.

“I was trying to figure out well, how are we going to draw people to this area?” Evans said.

Evans eventually decided she was confident enough to begin a new restaurant on Howard Street and, after selling her share in The Celtic Knot, she said she “jumped in with both feet.”

Since Peckish Pig’s opening in March 2014, Rainey said she has noticed an increase in visitors to the street.

Residents said with the addition of the new restaurants, Howard Street became a destination for the entire Evanston community.

“That’s been good for us, having people from outside the neighborhood come in and use those businesses and see that it’s a nice neighborhood down here and we all are pretty close,” said Michele Hays, an 8th Ward resident who lives on Dobson Street.

But now, Hays said, she’d like to see more properties that the residents initially asked for in the first planning meeting with Rainey and city officials. Having places such as a hardware store and an affordable diner or lunch restaurant would help serve 8th Ward residents, she added.

Howard Street resident and city clerk candidate Devon Reid said residents should have more of a say in the development than they have had in recent years.

“There doesn’t seem to be a lot of community input in that process,” Reid said. “It seems to be more top-down.”

Despite criticisms, Rainey said she is determined to continue developing Howard Street and is working to get City Council approval to build the Howard Street Theater. After two failed deals, city officials are now negotiating a partnership agreement with a new theater company.

In the meantime, Rainey said she is continuing to introduce potential tenants and entrepreneurs she hears about to property owners on the street.

“That’s what we spend a lot of time on, bringing people together,” Rainey said. “Sort of like fixing up dates.”

When Rainey was elected alderman, there was a notion that the north side of Evanston received more from the city than the south side did. But, she said, she rarely hears people mention it anymore.

“We get what everybody else gets,” Rainey said firmly.

Still, some 8th Ward residents said that although the allocation of resources may not differ greatly, there is seemingly more attention is paid to issues in north Evanston.

This seems to be especially true with regard to policy considerations by City Council, Reid said.

Reid said aldermen need to refocus their discussions to take into account the entire community.

Ina Drew, a former 8th Ward resident, said she sees a difference particularly in street cleanups and repairs between the two sides of the city.

Drew, a software engineer for the U.S. Federal Services Supreme Court branch, said when she drives to north Evanston, she feels a contrast to the streets in the 8th Ward.

“I don’t think that one neighborhood is favored over the other,” Drew said. “It’s just that more activities have been given to one over the other.”

Drew said her concern over “superficial” aspects of the neighborhood stems from a fear that failing to keep up the ward’s standards will affect her and others’ ability to sell their properties.

But Hays — the Dobson Street resident — said for the most part, the city has been fairly responsive to the ward’s needs. And, it has been doing more outreach in the area, including hosting movies and concerts in Brummel Park.