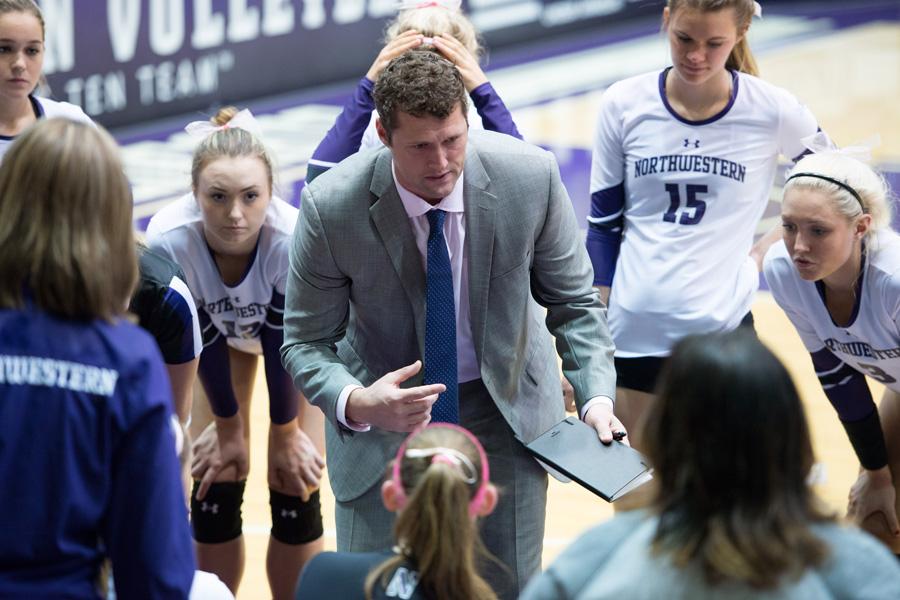 Coach Shane Davis talks to his team in a huddle. Although the Cats have struggled this year in Davis’ rookie year, he remains confident in the future of NU volleyball. (Daily file photo by Jonathan Dai/The Daily Northwestern)

Coach Shane Davis talks to his team in a huddle. Although the Cats have struggled this year in Davis’ rookie year, he remains confident in the future of NU volleyball.

Hearing it, one wouldn’t think that his volleyball team has won only one of its past 16 matches.

This losing record is obviously not how Davis would have liked to start his career at the helm of the Wildcats. But he knew coming in that early success would be difficult, and he has much bigger plans for the program than just a strong Big Ten campaign.

Davis, an Iowa native, played on the men’s volleyball team at Loyola from 2000 to 2003. And in 2004, the then-23-year-old found himself at the helm of the program as the new head coach of the Ramblers.

Eleven years later, Loyola was a national champion. The next year, the team repeated the feat. Davis was on top of the collegiate men’s volleyball world. He told his players and peers at Loyola, who he called “family,” that he would stay there. The Ramblers signed him to a five-year contract, and a third-consecutive NCAA Championship was in Davis’ sights.

Then, his phone rang. And with one call from NU, everything changed.

“It wasn’t something that I anticipated or expected or even wanted at that time,” Davis said of the Cats’ offer to him. NU had just fired its coach, Keylor Chan, who had led the program since 2000.

Davis had built a dynasty at Loyola, and he now had to choose between the school that had given Davis his career and a new opportunity in Evanston. He had to decide if he should move his family and have a “complete start over.”

He said it was the toughest choice in his life, but the decision came down to everything the Cats had to offer outside of the gym. However, Davis ultimately explained that Northwestern had everything he wanted in a coaching position — referencing academics, facilities, leadership and resources as among the most important.

“All of those things that you want to be able to address when you’re selling a recruit on your university,” Davis said. “Northwestern could check all of those boxes.”

Davis said he didn’t know if he would be able to find the sense of family at NU that he had grown so accustomed to at Loyola. But he quickly realized that wouldn’t be an issue.

“On my interview, as well as when I first started the job, the amount of coaches and staff that reached out to me to make sure I was doing OK was almost overwhelming, in a good way,” Davis said. “We’re a year in, and that wasn’t just a one-week thing. The family feeling and the feeling of support is unreal.”

For the two-time national champion, expectations coming into his first season were high. But facing off against competition from volleyball’s best conference, the Big Ten, Davis knew that the Cats’ success would not come quickly.

The team started off this season with a 7-5 record. With solid experience from its nonconference schedule, NU headed into conference play ready to compete.

But eight games into their conference schedule, Davis’ Cats were winless. A valiant effort against No. 24 Purdue on Oct. 21 gave Davis his first Big Ten win, but his team has not found a way to earn another victory since.

Despite wanting a better record, Davis said first-year wins are not necessarily his and his coaching staff’s priority right now.

“Year one is about understanding how Northwestern works, how the athletic department works, and all about the relationships and roles of the people within the University,” Davis said. “And getting to know the team: not just meeting them, but who they really are, where they’re from, their families and what they are like.”

Davis also faces the challenge of transitioning to coaching women’s volleyball from men’s. He said the change is going to take time, but that he is willing to make a significant commitment to the program.

“It’s a daily vision,” he said. “It wasn’t going to happen in the first week, the first month or even the first year.”

Despite the results in his first season, Davis has earned the trust of his players, the majority of whom had previously played in a different system under Chan.

Davis’ arrival to the program came in the middle of junior middle blocker Gabrielle Hazen’s career. Hazen said her coach’s transition has been relatively seamless, and the team believes in his ability to lead it.

“It wasn’t difficult to change anything. We were all so eager; we didn’t fight him on any changes,” Hazen said. “He’s a great coach; he’s easy to talk to, and we’ve all enjoyed having him here so far.”

Although it has not manifested in wins, this sentiment is evident through the Cats’ play this season. The team has fought hard in the toughest conference in volleyball, and last Saturday took No. 3 Wisconsin to five sets before falling in a heartbreaker. Davis said although his players sometimes return to their old habits, they trust him and the system he has implemented.

Freshman libero Sarah Johnson is sharing the first-year experience with her coach. She did not experience the program under the previous coaching staff. However, she said she can feel the improvement throughout the program, especially in the recruitment of new players.

“The recruits we are getting are very impressive, and they have so many accolades that might not have been there in the past,” Johnson said. “This coaching staff is taking our program into a positive direction. Things are only going to get better.”

Davis wants to build NU toward success in several steps, he said. The Cats’ culture and attitude are his current focus. Once they are established, Davis will be ready to consistently take aim at the Big Ten’s best teams.

With the right foundation, Davis believes he can bring NU to a place it has never been before.

“I believe we will win a national championship here,” Davis said. “But it takes time, and these things don’t happen overnight.”

It’s a lofty goal for Davis, but it’s one that he has twice proved he can achieve.

As the season winds down, Davis won’t think of that. This year’s win total is not his priority. Davis is set on changing the identity of a program, a task he knows will be arduous, but one he is ready to face head-on.

“The volleyball program isn’t where it needs to be or isn’t where I feel it is going to be in the future,” Davis said. “But my job is to get it there.”