In Focus: Spending big on the future of Northwestern football

In a couple of years, Northwestern football players will be running drills against the scenic backdrop of Lake Michigan in one of the nation’s most expensive practice facilities.

The $260 million Ryan Fieldhouse and adjoining Walter Athletics Center, due to be completed in summer 2018, will abut the north wall of Henry Crown Sports Pavilion and feature training facilities, office space and an indoor practice field offering sweeping views of the lake.

For the football team, the future fieldhouse is a means to lure better recruits to a program that has historically struggled. For the University, the lakefront facility is one of the most visible construction projects funded by the $3.75 billion “We Will” campaign.

As the most expensive practice facility in the Big Ten, few, if any, projects compare to the size and scope of NU’s new lakefront complex, and the new buildings will allow athletes to practice on campus rather than 1.5 miles to the west near Ryan Field. The next-most expensive practice facilities project in the conference is unfolding at the University of Minnesota, which announced a $190 million plan in 2013.

Beyond just football or varsity athletics, NU administrators have suggested the university’s facility will be a multi-use venue that benefits all students on campus. 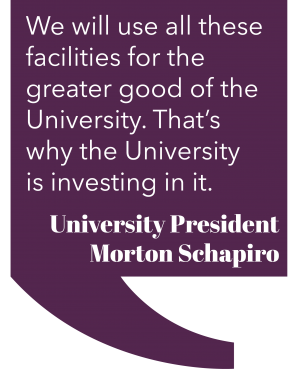 “The idea was we’d try to do Dance Marathon there, and we’d do a number of things,” University President Morton Schapiro told The Daily in October. “We will use all these facilities for the greater good of the University. That’s why the University is investing in it.”

But not everyone shares Schapiro’s enthusiasm. The student protest at the Ryan Fieldhouse groundbreaking one year ago is indicative of the frustrations some students have with how the University allocates its resources.

About 300 students disrupted the Nov. 13 groundbreaking to protest in solidarity with black students at the University of Missouri and Yale University and to make demands of the assembled administrators and donors.

Although the demonstration centered on institutional racism — not the construction project itself — Weinberg senior Marcel Hanna, who participated in the protest, told The Daily the choice to demonstrate at the athletic facility was deliberate.

“They know this kind of facility is going to put them on the map, or make them look nice, and that’s all they care about,” Hanna told The Daily. “They don’t really care about the well-being of their students.”

The investment has already been made, but it remains uncertain whether Ryan Fieldhouse can deliver on expectations to improve the fortunes of the football team and act as the community-builder administrators envision.

Football is now a vital part of the university’s athletic structure despite the team’s mixed and occasionally-sordid track record over the past 45 years.

The program bottomed out at the start of the 1980s, suffering through a 34-game losing streak that still stands as the longest ever in major-college football history.

In the midst of that futility, some University officials even flirted with moving NU out of the Big Ten, a conference it took part in founding, and into the lower-tier Ivy League. It was a far cry from the team’s heyday in 1949 when NU won the Rose Bowl.

But NU stayed in the Big Ten and ultimately rebounded, returning to the Rose Bowl after the 1995 season and maintaining respectability throughout the current tenure of coach Pat Fitzgerald. NU has also reaped the rewards of ever-more-lucrative broadcast rights deals that have left the entire sport flush with cash and given NU broader national exposure.

“(The Big Ten Network) is phenomenal for Northwestern football,” Fitzgerald said in February, referring to the conference-owned network that broadcasts games into over 60 million homes. “The exposure level of our program is at an all-time high.”

And as the stakes for football money and players have grown, so too has investment in the sport. In a race to attract recruits, many schools have begun to compete over who can build the best facilities.

“It’s become a never-ending arms race; everybody has to have the latest facilities,” Mandel told The Daily. “There’s schools I go to where every single time they’re building something new.” 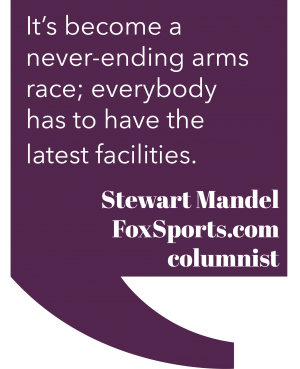 College football today is a big-money endeavor, especially for the elite in the sport. According to a USA Today analysis, the athletic departments of Michigan and Ohio State — two flagship programs in the Big Ten — each brought in more than $150 million in revenue in fiscal year 2014-15. More than half came from football.

NU’s athletic department works on a much smaller scale. According to Department of Education filings, the Cats’ football program brought in $31.7 million in fiscal year 2014-15, leaving over $10 million in profit.

The money brought in by college football programs is often siphoned away to subsidize other athletic programs, so schools usually turn to donors to pay the tab for new facilities.

Perhaps the best example of big sports spending is the University of Oregon, which opened a $138 million football performance center in 2013.

The sprawling facility features its own cafeteria and barbershop, boasts “Ferrari leather” seating in the team theater and is advertised by its official website as “entirely unmatched by any facility in college sports.”

But Northwestern has more room for improvement than Oregon.

“I do think it will make a difference in recruiting. You always want to put on your best face recruiting,” Mandel told The Daily. “At the end of the day, if you get two recruits you wouldn’t otherwise, it makes a difference.”

Working against the Cats is their position as a program where academic fit — and not facilities — matters most to many prospective recruits.

“(Facilities) never really crossed my mind,” redshirt freshman running back John Moten told The Daily about his recruiting experience. “I was more focused on where I wanted to be and where I saw myself in the future. I think this is a good place because of the academics and what the football program stands for.”

Moten’s response aligned with those of four other players interviewed by The Daily, who, while excited about the prospect of practicing on Lake Michigan, did not cite the Ryan Fieldhouse project or other athletic facilities as factors affecting their recruiting decisions.

“This major reconstruction project is extremely important to our football program,” then-coach Gary Barnett told the Northwestern Observer in 1997. “The new facilities will help the program immeasurably.”

The Cats won just 11 games over the next three seasons.

Rather than any one amenity of the building itself, the most important feature of Ryan Fieldhouse is likely its location.

“It’s never ideal to have a program one and a half miles away,” Mandel told The Daily. “NU’s case is less about the impact of recruiting and more about bringing the program back on campus.”

Nestled into the northeast corner of NU, Ryan Fieldhouse is significantly closer to the classes and residences of most athletes than the Ryan Field complex. 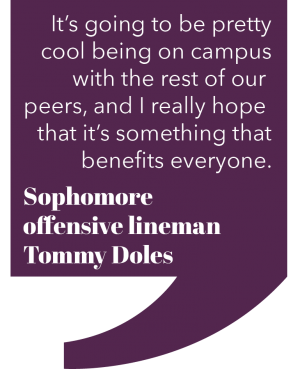 For sophomore lineman Tommy Doles, who represents student athletes in Associated Student Government Senate, this proximity is key to enhancing the athlete experience at NU.

“In the past, we’re ostracized, literally, by being a mile and a half away from campus,” Doles said. “It’s going to be pretty cool being on campus with the rest of our peers, and I really hope that it’s something that benefits everyone.”

That benefit to athletes isn’t just for football players. All 19 of NU’s varsity teams will utilize Ryan Fieldhouse and Walter Athletics Center, and the indoor field can also serve as a competition venue for soccer and lacrosse, athletic department spokesman Paul Kennedy told The Daily in an email, though specific plans have not yet been finalized.

In addition to bringing athletes closer to the rest of the Evanston campus community, Schapiro has stressed the multipurpose nature of the facility. Ryan Fieldhouse, he said, is a large and enclosed venue that can be utilized for major campus events.

“You could see with Nate Silver, we packed (Pick-Staiger Concert Hall) with a thousand (people),” Schapiro told The Daily. “What do you do if you need a bigger venue for a party or a speaker or whatever?”

The biggest potential use of the fieldhouse is Northwestern Dance Marathon, which Schapiro and athletic director Jim Phillips expect to move from its current location on the Norris East Lawn once the fieldhouse is complete.

Dance Marathon has not finalized plans to move its annual Winter Quarter fundraiser, executive co-chairs Jenny Halpern and Ian Pappas told The Daily in an email. Last year, former executive co-chair Arielle Miller (Medill ‘16) told The Daily that hosting Dance Marathon in Ryan Fieldhouse would lower costs of the 30-hour event and would decrease the registration fee for dancers.

Weinberg senior Isaac Rappoport, ASG’s chief of staff, told The Daily he expects ASG to advocate for the facility to be used by more groups than just Dance Marathon.

“As the primary representatives for undergraduate students on campus, we’re always going to push for more access to the average undergrad,” Rappoport said. 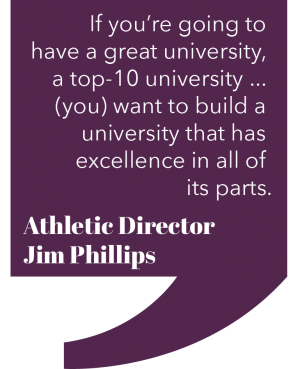 Rappoport added that moving student-athletes closer to campus is a problem worth solving, but questioned whether the $260 million cost of Ryan Fieldhouse was the best way to address that concern.

Students who make frequent use of campus recreational facilities are hopeful that the benefits of Ryan Fieldhouse will extend to them as well. Weinberg senior Demo Drakoulis, who told The Daily he plays pickup soccer two to three times per week, expressed frustration over the lack of a dedicated field for recreation at NU.

Drakoulis added it can be difficult for pickup soccer players to navigate the scheduling of NU’s existing varsity athletic fields, though he said his experience using them was positive overall despite occasionally being kicked off to accommodate a varsity team.

Phillips did not address specific plans for how Ryan Fieldhouse might be used recreationally by students, but pointed out that other facilities, such as the recently-constructed Hutcheson Field, are frequently used by students and club sports teams. He also expressed a desire to renovate Long Field for student use in the near future.

But for students like Hanna, who participated in the November 2015 protest, the benefit to recreation Ryan Fieldhouse may provide to students doesn’t mean much in the face of more pressing issues. He noted that most of the demands from the protest last year have still not been met.

Those demands include bettering mental health resources on campus and remodeling the Black House and Multicultural Center, which became the focus of student activism after administrators attempted to consolidate office space there.

Last spring, the University drew praise for eliminating the 12-session limit at Counseling and Psychological Services. But earlier this fall, students criticized administrators’ decision to remove long-term counseling at the Women’s Center and redirect its mental health services to CAPS.

For Phillips, the cost of the project is simply a function of the funds available to him. He told The Daily all the money for the fieldhouse project came from outside donations to athletics and not university resources. Phillips added that he feels he has an obligation to student-athletes to use that money to build the best facilities.