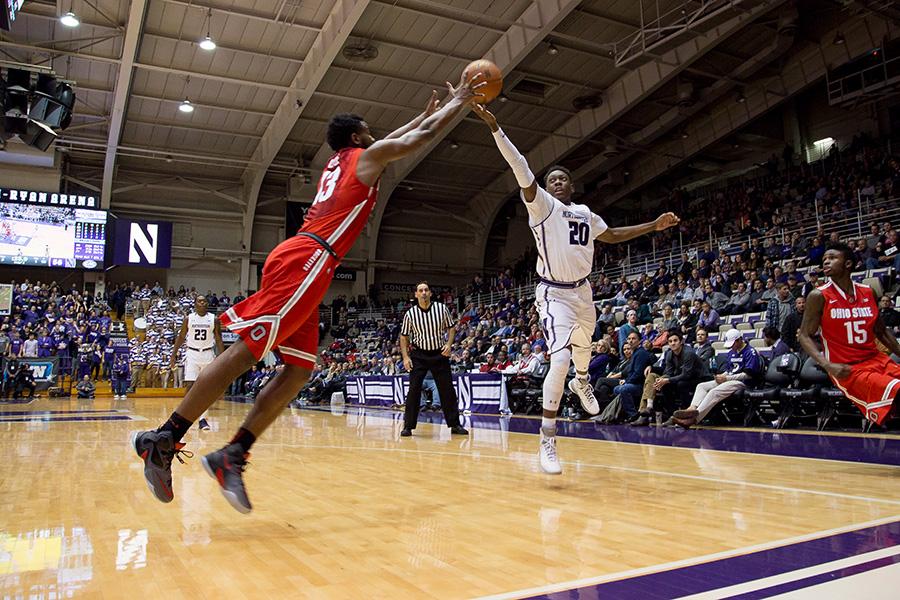 Men’s Basketball: Will Northwestern take a step back or forward?

Balk: Northwestern will take step back this year

Bringing sophomore Vic Law back could be a gamechanger for a defense that never seemed to disrupt opponents’ offenses last winter.

Bryant McIntosh could explode as a junior, putting up 20-point nights regularly.

And sophomore big man Dererk Pardon could make a big jump, crashing boards and getting more comfortable on the defensive end.

It all could happen. Heck, Northwestern could even make its first NCAA Tournament ever. But I’ll believe it when I see it.

The defensive issues that plagued the Wildcats last season likely will only be amplified by the departures of Alex Olah and graduate transfer Joey van Zegeren. And, while this team should shoot the ball decently, carving out a new offensive identity for a team with only one proven shot creator (McIntosh) and without a conventional post scorer could prove a year-long project.

Junior Scottie Lindsey, sophomore Aaron Falzon and freshman Isiah Brown will all be asked to make huge steps as offensive players. Expecting them all to smoothly make the jump from role players to consistent producers is a tall ask.

Asking Pardon to both stay out of foul trouble and produce offensively is even steeper. Pardon’s a solid player and will do some great things as a sophomore. But he’s not Charles Barkley. He can’t do it alone in the paint.

Ultimately, NU fans expecting improvement from last year may be expecting too much too soon from the team’s young guns.

These Cats will be an exciting outfit to watch. But Big Ten teams are going to pick their defense apart and kill them with second chance points.

It’s possible the squad takes a huge step forward and the Cats manage 20 wins again despite a significantly more challenging schedule than a year ago.

Tim Balk is a Medill junior. He can be contacted at [email protected]. If you would like to respond publicly to this column, send a Letter to the Editor to [email protected]. The views expressed in this piece do not necessarily reflect the views of all staff members of The Daily Northwestern.

Losing starters to graduation is never easy. Tre Demps and Alex Olah both enjoyed impressive careers at Northwestern, and the team will certainly miss their experience and leadership.

But their departures hardly spell doom for the Wildcats. If anything, they pave the road for fresh faces to invigorate a squad that had begun to stagnate. Throw in the return of Vic Law — arguably the team’s top talent — and an added offseason behind captain Bryant McIntosh and company, and the signs suggest NU is primed to improve.

The importance of Law’s return cannot be stressed enough. After redshirting last season, the forward has the opportunity to take the leap many expected a year ago. His athleticism bolsters the Cats’ defense tenfold and will help the team thrive in transition, where it struggled last year.

Stepping into Demps’ shoes as a go-to option on the offensive end, Law provides versatility and a non-shooting scoring option that will create opportunities for his teammates. And Demps’ shooting? There’s a reason coach Chris Collins gushes about freshman Isiah Brown. As both a pure shooter and confident slasher, Brown offers more upside than Demps ever could.

Olah’s production will be harder to replace. Dererk Pardon is undersized, and freshman Barret Benson is raw. But they undoubtedly have more combined potential on the defensive end than Olah and surpass him athletically. Collins wants to run this year and finally has the personnel at the 5 to do so.

And preseason chatter suggests that juniors Gavin Skelly and Scottie Lindsey have taken the next step. At the very least, they’ll remain valuable role players who bring specific skills to the Cats’ roster.

This year’s NU squad is going to have to fight to reach the 20-win benchmark that last season’s team hit, but that’s the result of a more difficult schedule, not a less talented team.

So yes, NU will miss Olah and Demps. But with an impressive pair of freshman on the roster and a set of returners on the verge of a step forward, the Cats seem destined to improve.

Garrett Jochnau is a Medill sophomore. He can be contacted at [email protected]. If you would like to respond publicly to this column, send a Letter to the Editor to [email protected]. The views expressed in this piece do not necessarily reflect the views of all staff members of The Daily Northwestern.