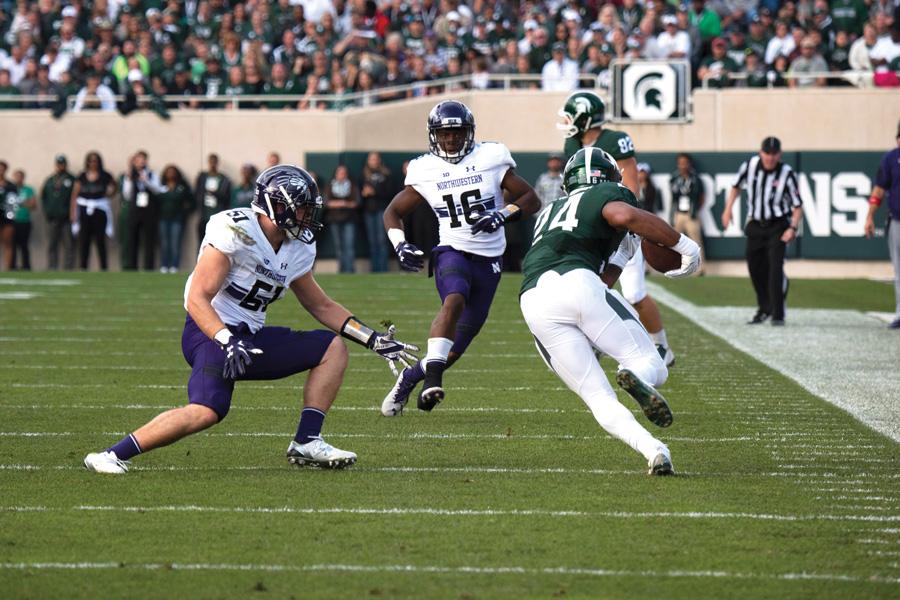 Godwin Igwebuike knew it was a long time coming.

The junior safety had gone nearly two years, and more than 20 games, since his last interception. Back on a chilly day in early October 2014, the then-freshman picked off three passes, leading NU to an upset win over a ranked Wisconsin team. But outside of the bonanza against the Badgers, Igwebuike entered the Wildcats’ game with Duke this September without another interception to his name.

Prior to the game, Igwebuike, brought up in a Christian household and the grandson of a pastor, was praying. He said God told him, “You’re going to get an interception today.”

“If you believe it,” Igwebuike said God told him, “go ahead and tweet it.”

Igwebuike had reservations. He thought about the fact that his teammates would make of fun of him if he called his shot on Twitter and then failed in the game. In the end, he had faith. About an hour and a half before the game, he tweeted “Thanks for the int.”

The play came out of the shotgun, as Blue Devils quarterback Daniel Jones faked a handoff and then quickly turned up field, lobbing a pass to his slot receiver, who was running a post route.

Igwebuike, in position and unfooled by the play action, cut off the pass and picked it off. It was a huge, momentum-snuffing play.

The Cats, who entered the game 0-2, went on to win 24-13 and have since won two of three. Igwebuike saw both his faith and his preparation pay off in the play.

The moment and game were not only turning points in the season, they highlighted the importance of the junior who has stepped up this fall to lead a defense in transition.

“He could have done either/or, as far as I was concerned,” Fitzgerald said.

Growing up in Pickerington, Ohio, a suburb of Columbus, Igwebuike was an athlete in a complete sense. In his childhood, he played five sports: football, basketball, soccer, baseball and track, he said.

Football would prove to be his favorite.

“Football ended up being the one I was best at,” Igwebuike said. “So I liked it the most.”

As in sports generally, Igwebuike was all over the place on the gridiron. Thinking back to his early football days, Igwebuike said he played “everything but lineman,” but then paused to add that, in fact, he played a little bit of defensive line too. In junior high school, he played quarterback and linebacker. As he got older, he switched to running back and safety, the two positions he played throughout high school.

Eventually, Igwebuike settled on safety over running back. He found himself growing bored on the offensive side of the ball, but never on defense. While stalking the defensive backfield, he never wanted to come off the field.

“I enjoyed running back a lot; that’s obviously the glory position,” Igwebuike said. But at safety, he was truly home. “I wanted to play on defense the entire game, if I could. So that was kind of an indicator to me that that was the position I was most passionate about.”

The change was just another adjustment Igwebuike had to make coming in at NU, and Fitzgerald noted that the demands on defensive backs are significant. They usually play the role of the “quarterback of the back half,” Fitzgerald said. Nonetheless, Igwebuike made the adjustment in stride.

And he’s not regretting the switch. When you’re on offense, you have to take the hits, he noted.

“I’d rather be delivering those hits,” Igwebuike said. 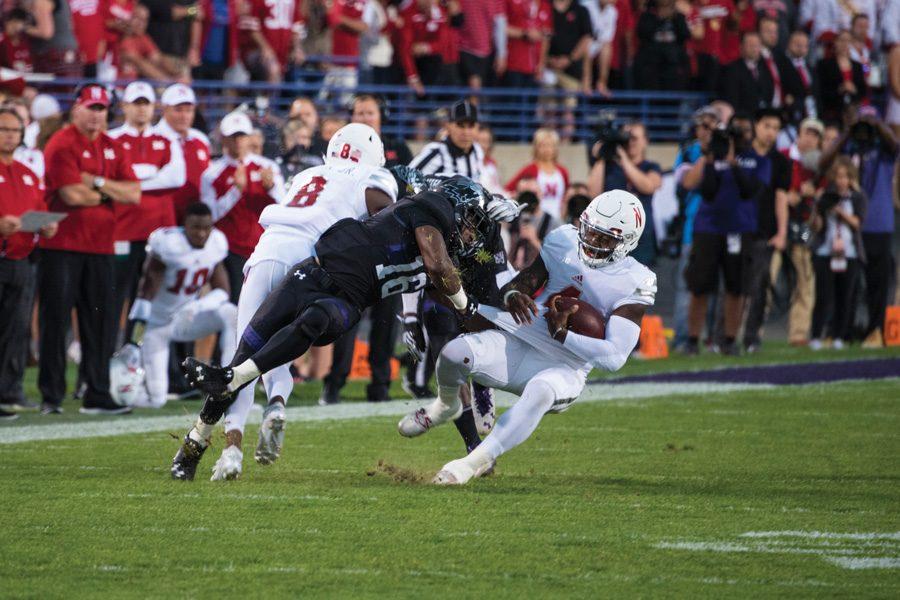 Now in his third year as a starter and fourth year on the team (he started part-time as a redshirt freshman in 2014), Igwebuike delivers leadership to the team’s youthful defensive backs. The group, nicknamed the “Sky Team” for years, has long been considered one of the team’s strongest, but the unit has thinned this fall due to departures and injuries.

The Cats lost starting defensive backs Nick VanHoose and Traveon Henry to graduation going into the season and were further decimated by injuries to junior safety Keith Watkins II, senior cornerback Matthew Harris and junior Kyle Queiro. Queiro returned against Iowa, but Watkins is out for the season, and Harris’ return timetable has not been revealed.

Igwebuike has often been left as the lone veteran presence left in the defensive backfield.

“He’s done a great job stepping up,” junior linebacker Anthony Walker said before the team’s victory over Michigan State. “He’s leading those young guys and keeping them confident in everything that they do.”

“He’s been a lot more vocal,” Odenigbo said. “Hearing him talk really inspires all the older guys and younger guys.”

Igwebuike admits that he was not the most vocal in the past. But the situation this year required him to step up into a more prominent clubhouse role.

One place he takes a special leadership role is film room, where Queiro said that he and Igwebuike try to set the tone.

“Even when we’re watching film, we’re calling each other out. Just to let everybody know what we’re looking to accomplish,” Queiro said.

That’s not the only way Igwebuike is leading by example.

Before the Cats’ took the field against Michigan State, sophomore safety Jared McGee took a page out of Igwebuike’s playbook, posting a photo on Instagram with the caption that read, in part, “Thank you Lord in advance for the INTs.”

McGee’s followed up his post as well, picking off Spartan quarterback Tyler O’Connor at the start of the fourth quarter. He credited Igwebuike for the inspiration.

“Godwin’s leadership has been extremely valuable,” McGee said. “He’s mentored me since the beginning of camp. Before camp, in the off-season, watching film with me, critiquing some of the things that happen when I’m on the field.”

If imitation is the sincerest form of flattery, McGee paid Igwebuike a major compliment with his prediction before Michigan State. What’s more, McGee’s interception helped hand the Cats an eventual 54-40 win. 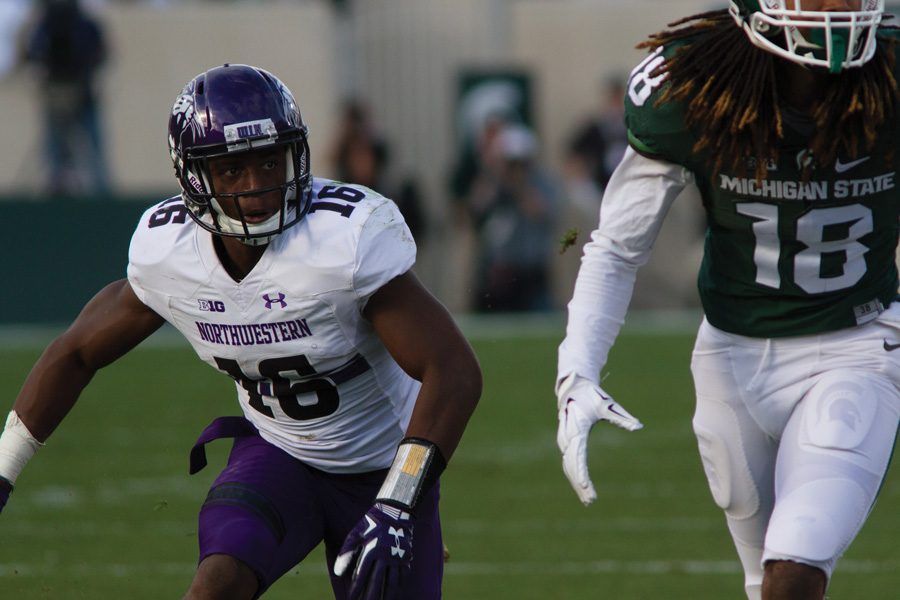 If Igwebuike, described by Queiro as a “real carefree guy,” looks like he’s having fun, that’s because he is.

“I’m definitely having a blast,” he said. “These are the good times.”

He said he’s accumulated some of his best memories at NU, both on and off the field. In particular, he has relished his time on the Sky Team, a group he calls the team’s closest and most energetic. As a sophomore, he lived in the Foster-Walker Complex and reminisced on his memories there.

“Late night talks with your boys — nothing better,” Igwebuike said. “Just having those conversations, acting a fool, being goofy and just living in the moment.”

Igwebuike was reminded of the importance of the moment in October 2014. While he was thriving in NU’s defensive backfield, one of his close friends, Kody Kasey, experienced a life-changing event.

For Kasey, a broken leg gave way to an infection and then an amputation. Kasey, though, was not ready for his time on the gridiron to end. After missing the entire 2015 season, he has returned this year for Georgetown College with a prosthetic right leg.

Igwebuike said his friend’s journey has inspired him.

“That really put some perspective,” Igwebuike said, adding that it reminded him of how easily football can be taken away. “It comes back to that perspective — I’m only going to be able to do this for so long, so why not take advantage of it?”

Igwebuike also credits his teammates for keeping the energy on the team loose and helping to make things fun.

That fun isn’t limited to the field. There’s always social media, too, where Igwebuike jokes he possesses one of the “more balanced and strong” presences on the team.

“I enjoy Twitter,” he said. “Every now and then I’ll put something out there. Maybe throw some wisdom out there. Throw a little joke. Maybe a little prophecy.”

Before the Michigan State game, defensive backs coach Jerry Brown asked Igwebuike if he was trying to be All-Big Ten, the safety said.

“I’m kind of the guy who tries to attack everything individually,” he said.

On a team with a one-game-at-a-time attitude, Igwebuike’s philosophy fits. Fitzgerald and the players so often use language along the lines of going “1-0 each week,” it sometimes draws laughs among media covering the team.

Igwebuike, though, said he took Brown’s question to heart.

“I can incorporate both — attacking everything I do with long time term goals in mind, like being All-Big Ten, All-American,” Igwebuike said.

Igwebuike knows the team has goals ahead too. Despite the injuries in the defensive secondary, the Cats have recovered from their early season woes and enter their homecoming weekend battle with Indiana just one game out of first in the Big Ten West.

Facing a critical three-game stretch that includes games against No. 2 Ohio State and No. 10 Wisconsin, the Cats will look to Igwebuike to continue to provide tough coverage and veteran leadership.