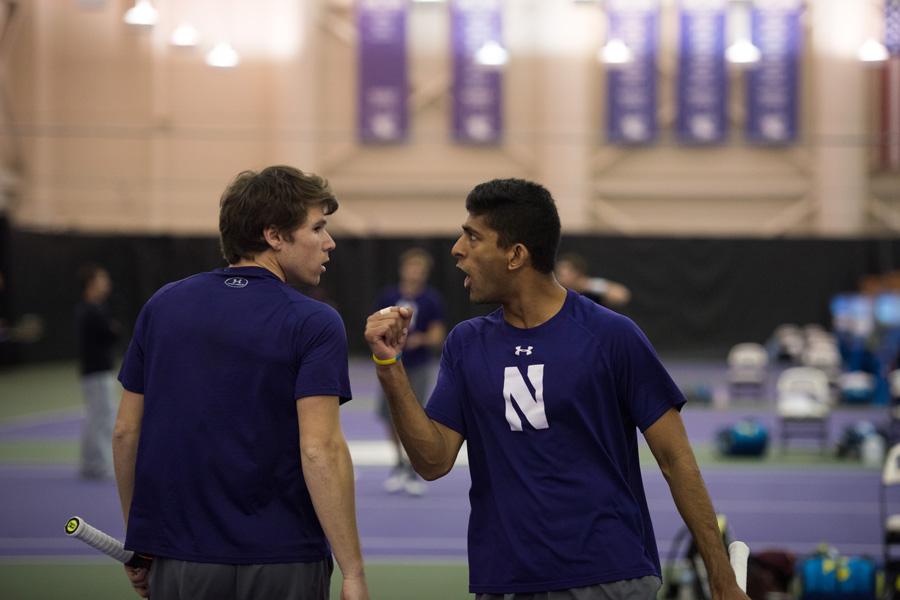 During the summer going into his senior year, Mihir Kumar had his nose to the grindstone.

“I’d get up at 6 a.m., work out in the morning, get into work at 8 a.m., get out at 7 p.m., and then go hit with random kids from Connecticut at night,” Kumar said, referencing his schedule during his internship last summer. “Sometimes I’d go back at 9 p.m. and finish work.”

A ferocious work ethic and a disciplined mentality are what makes Kumar — one of the two seniors on the men’s tennis team — tick. Fedor Baev, his fellow senior teammate, calls Kumar “the perfect student-athlete,” and Kumar said he puts his best effort into whatever comes his way.

“He doesn’t half-ass anything,” said Baev, Kumar’s best friend on the team. “He really does everything as well as he can.”

Kumar’s mental game peaked his senior year, when his hard work and maturity propelled him to a 20-4 doubles record, largely contributing to Northwestern’s record-breaking season — the Wildcats broke the record for most regular-season wins in program history with 24.

However, it wasn’t always rosy for Kumar. In fact, it took him a long time to thrive in all aspects of the game. When Kumar played No. 1 singles at Carmel High School in Carmel, Indiana, he said he suffered from a lack of confidence, as he never succeeded in his ultimate goal of winning a state singles championship.

Once he got to NU, he had a hard time transitioning from high school. Aside from fighting for playing time, he struggled to find time for academics and social life.

“Tennis was my life,” Kumar said. “I took it so seriously.”

However, he applied himself both in the classroom and on the court. Near the end of his freshman year, he found himself cemented in the Cats’ singles and doubles lineups. He transitioned with some confidence into the summer, where he said he found himself training at NU at an intense level.

“Dead summer: 90 degrees, three practices and a (workout). I definitely got burnt out a little,” Kumar said. “But I was always the guy who loved extra practices. The idea that we had to take a day off was shocking to me.”

Kumar only got better his sophomore year, the season he describes as his best tennis year. He played Nos. 3 and 4 singles and No. 1 doubles for the majority of the year. In addition, lone senior Raleigh Smith was hurt, and the Cats needed someone to lead the team.

“His sophomore year, he was the heart of the team,” Baev said. “He came up huge a number of times for us that year.”

He carried this success into his junior year, acting as the rock in the middle of NU’s lineup, but Kumar’s darkest moment came in March of his junior year.

Kumar had been playing No. 4 singles consistently, and said clinching a singles win against No. 23 Columbia to decide the match 4-3 was his most memorable victory. However, then-sophomore Konrad Zieba returned from injury after the match, so one player had to be removed from the singles lineup for the next match against Rice.

“That was a tough call as a coach,” coach Arvid Swan said. “You have more guys who should play than spots.”

Kumar didn’t play the Rice match, and the Columbia match was the last time he regularly appeared in the singles lineup for the rest of his collegiate career.

“I was in absolute shock,” Kumar said. “I didn’t understand why it was happening. It was the first time in 3 years that I hadn’t played.”

Tennis-wise, Kumar was right. He had been a staple at singles for the majority of his first two years, holding down a spot in the lineup without fear of being benched. But Kumar said he began to question things and developed a more negative attitude.

Carrying a six-match winning streak into the Rice match, the Cats were obliterated 4-1 by a lesser-ranked team, and Kumar was forced to overcome the adversity of watching from the sideline. More importantly, Kumar said his priorities changed after the Rice match, as he began to realize that tennis wasn’t going to be a part of his life forever.

Kumar finished the season at No. 3 doubles for NU and even found some footing. He began to work harder on and off the court. When he came back to NU, he returned to his old selfless ways.

Swan said his proudest moment as a coach was when he talked to Kumar about his role on the team his senior year and praised his willingness to do what was best for the team.

Kumar’s acceptance of his new role was evident. Baev said he did a “tremendous” job of accepting his new role, and Kumar thrived at No. 3 doubles with Alp Horoz, earning the 2nd-best doubles winning percentage in a single season. Swan said Kumar’s energy resonated through the entire team and fostered huge success overall.

“He’s brought so much energy,” Swan said. “The No. 3 doubles team brought tremendous energy to all three doubles teams every single match.”

Now that Kumar is done with tennis, he’ll be starting a job with AQR Capital Management, the firm he interned with last summer. Kumar said he needed to move on from tennis, but at the same time it was hard to let go of the sport forever.